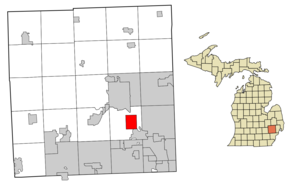 Bloomfield Hills is a in Oakland County of the of , convert|10|mi northwest of (18 miles from downtown Detroit). As of the 2000 census, the city population was 3,940.

There were 1,520 households out of which 26.2% had children under the age of 18 living with them, 71.9% were married couples living together, 3.2% had a female householder with no husband present, and 23.2% were non-families. 21.1% of all households were made up of individuals and 10.3% had someone living alone who was 65 years of age or older. The average household size was 2.45 and the average family size was 2.84.

On , , Oakland County was divided into two townships: Pontiac Township, and Bloomfield Township, the latter covering the southern part of the county that would include West Bloomfield Township, Royal Oak and Southfield. What is now Bloomfield Hills was a farming area until the turn of the 20th Century when wealthy Detroit residents bought up the land. The settlement became a village in 1927 and in 1932, residents voted to become a city to avoid being incorporated into growing Birmingham.

The origin of the name "Bloomfield" is uncertain. Bloomfield Hills' former names were "Bagley's Corners," after early settler Amasa Bagley, and "Circle City."

The city is served by the , a public school district. The district operates the , a tuition-free, public consortium high school which offers the IB Diploma Program and is consistently rated by "" magazine among the top ten public high schools in the United States.

The Wing Lake Developmental Center, located in Bloomfield Township, is a school for special education.

Bloomfield Hills is home to the , Academy of the Sacred Heart, as well as The Roeper School,St Hugo's of the hills, and Brother Rice and Marian High School.

*Eminem mentions Cranbrook Kingswood in the 2002 movie "8 Mile" He makes fun of "Doc" because he attended Cranbrook, which is not considered cool or impressive in the atmosphere portrayed in the movie.

*Bloomfield Hills is the hometown of the character, Trance.