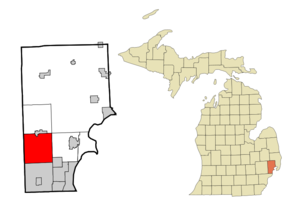 * is an important north-south artery in the city.
*East-west travel is mainly on the mile roads, that is 14 Mile Road on the south (Warren) border through 20 Mile Road (M-59) on the north border. See .
*16 Mile Road (known as Metropolitan Parkway to the east, and to the west) is a main thoroughfare.
* is an important diagonal connector that criss-crosses the city from southeast to northwest, going at the intersection of (across from the Sterling Heights city hall, and across the road from Dodge Park) through the first in Macomb County.

There were 46,319 households out of which 32.9% had children under the age of 18 living with them, 60.4% were married couples living together, 8.5% had a female householder with no husband present, and 27.9% were non-families. 24.1% of all households were made up of individuals and 8.5% had someone living alone who was 65 years of age or older. The average household size was 2.66 and the average family size was 3.21.

Sterling Heights was incorporated as a city in 1968. It was until the 1950s an agricultural area largely devoted to growing rhubarb and other crops sold in Detroit. ["Seven Miles From Home"] Prior to 1968 Sterling Heights was known as Sterling Township. It had from 1836 until 1838 been known as Jefferson Township.

Anthony Dobry was the last township supervisor, and then he served on the first city council. Dobry on northern city limits is named for him. Gerald Donovan became the first mayor of the city. There was already a small village named Sterling in Arenac County, so the word "Heights" was added to the township name to satisfy a state law that prevents incorporated municipalities from having the same name. "Sterling Oaks" was another name under consideration for the new city. [ [https://www.sterling-heights.net/bins/site/templates/default.asp?area_2=pages/comm/history/pre-cityhistory/pre-cityhistory_506.dat&area_1=pages/nav/comm/history/history.dat&area_3=0.dat&area_0=0.dat&area_8=0.dat&objectid=BEB01220&ml_index=2&NC=758X Pre-City History] , The Official Site of the City of Sterling Heights]

The city is home to the Freedom Hill county park, [ [http://www.freedomhillcountypark.com/ Freedom Hill County Park.] ] located on Metropolitan Parkway (16 Mile Road) east of Schoenherr Road. Freedom Hill began hosting concerts in 1999 in its 7,000-seat, outdoor theater. Several residents near the park began complaining about the loud music coming from the amphitheater. [ [http://www.tickco.com/venue_schedules/freedom_hill_amphitheater.htm Freedom Hill Amphitheater.] ] The complaints led to a long legal battle between Sterling Heights and Hillside Productions, which runs the theater, over the theater's impact on the neighborhood.

In 2001, Hillside Productions filed suit in state and federal courts, accusing city officials of conspiring to interfere in its operations. In March 2004, the city settled out of court, agreeing to pay Hillside $31 million. As part of the settlement, Hillside built a convert|14|ft|m|0|sing=on-high sound wall and a huge roof to cover the pavilion seating area. It remains only partially enclosed. Concerts resumed, as did the complaints of neighbors. Sterling Heights then sued three of its insurance carriers who refused to compensate the city for its $31 million payment. In 2006, the city settled with two of the three insurers.

In the summer of 2006, it became publicly known that the city was considering amending its to include a requirement that all businesses post a premises identification sign in English, in order to facilitate the ability of to locate an emergency call. On July 13, 2006, the city received a letter from the of Michigan (ACLU) expressing its viewpoint that the English-language requirement for business signs was discriminatory.

The August 2006 issue of "Money" magazine listed Sterling Heights as No. 19 on its list of the 90 "Best Small Cities" to live in.

Notable residents past and present

The community has recurring events. They include:
*"Ice carving festival" in February; [ [http://www.suscc.com/community_events.php Community events calendar, Chamber of Commerce] ]
*"Sterlingfest" in August.Additionally, there are singular community events, and a calendar is available. [http://www.suscc.com/event_links.php Chamber of Commerce Calendar of current events.]