Lake Michigan is one of the five Great Lakes of North America and the only one located entirely within the United States. It is the second largest of the Great Lakes by volume[1] and the third largest by surface area, after Lake Superior and Lake Huron (and is slightly smaller than the U.S. state of West Virginia). Hydrologically, the lake is a large bay of Lake Michigan-Huron, having the same surface elevation as Lake Huron (among other shared properties). It is bounded, from west to east, by the U.S. states of Wisconsin, Illinois, Indiana, and Michigan. The word "Michigan" originally referred to the lake itself, and is believed to come from the Ojibwa word mishigami meaning "great water".[3]

Some of the earliest human inhabitants of the Lake Michigan region were the Hopewell Indians. Their culture declined after 800 A.D., and for the next few hundred years the region was the home of peoples known as the Late Woodland Indians. In the early seventeenth century, when western European explorers made their first forays into the region, they encountered descendants of the Late Woodland Indians: the Chippewa, Menominee, Sauk, Fox, Winnebago, Miami, Ottawa, and Potawatomi. It is believed that the French explorer Jean Nicolet was the first non-Native American to reach Lake Michigan in 1634 or 1638.[4]

With the advent of European exploration into the area in the late 17th century, Lake Michigan became part of a line of waterways leading from the Saint Lawrence River to the Mississippi River and thence to the Gulf of Mexico.[5] French coureurs des bois and voyageurs established small ports and trading communities, such as Green Bay, on the lake during the late 17th and early 18th centuries.[6]

The first person to reach the deep bottom of Lake Michigan was J. Val Klump, a scientist at the University of Wisconsin–Milwaukee. Klump reached the bottom via submersible as part of a 1985 research expedition.[7]

Twelve million people live along Lake Michigan's shores, mainly in Chicago and Milwaukee. Many small cities in Northern Michigan and Door County, Wisconsin are centered on a tourist base that takes advantage of the beauty and recreational opportunities offered by Lake Michigan. These cities have large seasonal populations that arrive from the nearby urban areas such as Chicago, Milwaukee, Grand Rapids and Detroit, as well as from Southern states, such as Florida and Texas. Some seasonal residents have summer homes along the waterfront and return home for the winter. The southern tip of the lake near Gary, Indiana is heavily industrialized. Cities on the shores of Lake Michigan include: 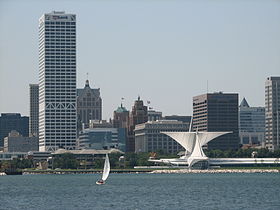 Connection to ocean and open water 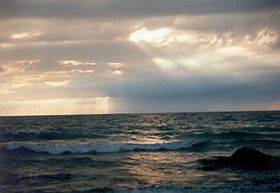 The Saint Lawrence Seaway and Great Lakes Waterway opened the Great Lakes to ocean-going vessels. Wider ocean-going container ships do not fit through the locks on these routes and has thus limited shipping on the lakes. Despite their vast size, large sections of the Great Lakes freeze in winter, interrupting most shipping. Some icebreakers ply the lakes.

The Great Lakes are also connected by canal to the Gulf of Mexico by way of the Illinois River (from Chicago) and the Mississippi River. An alternate track is via the Illinois River (from Chicago), to the Mississippi, up the Ohio, and then through the Tennessee-Tombigbee Waterway (combination of a series of rivers and lakes and canals), to Mobile Bay and the Gulf. Commercial tug-and-barge traffic on these waterways is heavy. 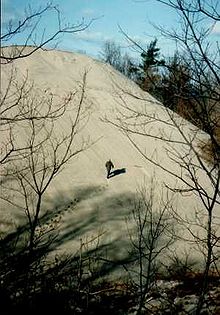 Lake Michigan has many beaches. The region is often referred to as the "Third Coast" of the United States, after those of the Atlantic Ocean and the Pacific Ocean. The sand is soft and off-white, known as "singing sands" because of the squeaking noise (caused by high quartz content) made when one walks across it. There are often high sand dunes covered in green beach grass and sand cherries, and the water is usually clear and cool (between 55 and 80 °F [13 and 27 °C]),[8] even in late summer. However, because prevailing westerly winds tend to move the surface water toward the east, there is a flow of warmer water to the Michigan shore in the summer.[9] The sand dunes located on the Michigan shore are the largest freshwater dune system in the world. In fact, in multiple locations along the shoreline, the dunes rise several hundred feet above the Lake surface. Large dune formations can be seen in many state parks, national forests and national parks along the Indiana and Michigan shoreline. Some of the most expansive and unique dune formations can be found at Indiana Dunes National Lakeshore, Saugatuck Dunes State Park, Warren Dunes State Park, PJ Hoffmaster State Park, Silver Lake State Park, Ludington State Park and Sleeping Bear Dunes National Lakeshore. Small dune formations can be found on the western shore of Lake Michigan in Illinois Beach State Park and moderate sized dune formations can be found in Kohler Andre State Park and Point Beach State Forest in Wisconsin. A large Dune formation can be found in Whitefish Dunes State Park in Wisconsin in the Door Peninsula. Lake Michigan beaches in Northern Michigan are the only place in the world, aside from a few inland lakes in that region, where one can find Petoskey stones, the state stone.

The beaches of the western coast and the northernmost part of the east coast are rocky, while the southern and eastern beaches are sandy and dune-covered. This is partly because of the prevailing winds from the west which also cause thick layers of ice to build on the eastern shore in winter.

The Chicago city waterfront is composed of parks, beaches, harbors and marinas, and residential developments. Where there are no beaches or marinas, then stone or concrete revetments protect the shoreline from erosion. The Chicago lakefront is quite walkable as one can stroll past parks, beaches, and marinas for about 24 miles from the city southern limits with Lake Michigan to its northern city limits point.

The Chicago skyline can be seen from the northwest Indiana shoreline and, on a clear day, extreme southwestern Michigan. When standing at the waterfront in Illinois, Wisconsin, and the lower peninsula of Michigan, it is impossible for one to see directly across the lake to another state. This gives the lake a view similar to that of an ocean. Viewing a state across the huge lake is possible from several Chicago skyscrapers. It is possible from some of the taller buildings in Chicago to make out points in Indiana and southwest Michigan such as the NIPSCO (Northern Indiana Public Service Company) cooling tower of its power plant in Michigan City, Indiana.

Some environmental problems can still plague the lake as steel mills operate near the Indiana shoreline. The Chicago Tribune reported that BP is a major polluter, dumping thousands of pounds of raw sludge into the lake every day from its Whiting, Indiana oil refinery.[11]

People can cross Lake Michigan by the SS Badger, a ferry that runs from Manitowoc, Wisconsin, to Ludington, Michigan. The Lake Express, established in 2004, carries motorists across the lake between Milwaukee, Wisconsin, and Muskegon, Michigan. 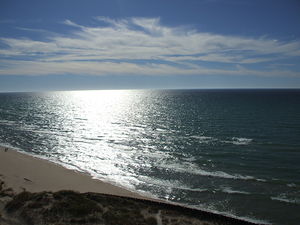 There are numerous state and local parks located on the shores of the lake or on islands within the lake. A partial list follows. 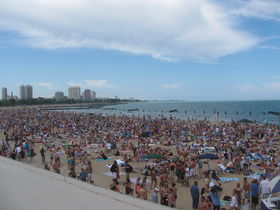 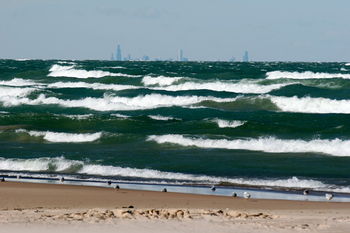 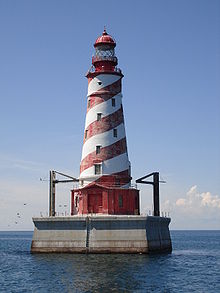 The Milwaukee Reef, running under Lake Michigan from a point between Milwaukee and Racine to a point between Grand Haven and Muskegon, divides the lake into northern and southern basins. Each basin has a clockwise flow of water, deriving from rivers, winds, and the Coriolis effect. Prevailing westerly winds tend to move the surface water toward the east, producing a moderating effect on the climate of western Michigan. There is a mean difference in summer temperatures of 5 to 10 degrees Fahrenheit (2 to 5 degrees Celsius) between the Wisconsin and Michigan shores.[9]

Hydrologically Michigan and Huron are the same body of water (sometimes called Lake Michigan-Huron), but are geographically distinct. Counted together, it is the largest body of fresh water in the world by surface area. The Mackinac Bridge is generally considered the dividing line between them. Both lakes are part of the Great Lakes Waterway. In earlier maps of the region, the name Lake Illinois has been found in place of "Michigan".

Lake Michigan is home to a variety of species of fish and other organisms. It was originally home to lake trout, yellow perch, panfish, largemouth bass, smallmouth bass, bowfin, as well as some species of catfish. In recent years overfishing has caused a decline in lake trout, ultimately causing an increase in the alewife population. As a result, coho and chinook salmon were introduced as a predator of alewives to decrease the alewife population. This program was so successful that the salmon population exploded, and the states surrounding Lake Michigan promoted Salmon Snagging. This practice has since been made illegal in all of the great lakes states with the exception of a limited season in Illinois. Lake Michigan is now being stocked with several species of fish. However, several invader species introduced such as lampreys, round goby, and zebra mussels threaten the vitality of fish populations.

A beach at downtown Chicago 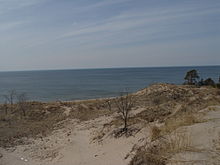