Korean Americans (Korean: 한국계 미국인, Hanja: 韓國系美國人, Hangukgye Migukin) are Americans of Korean descent, mostly from South Korea, with a small minority from North Korea. The Korean American community comprises about 0.5% of the United States population, or about 1.6 million people, and is the fifth largest Asian American subgroup, after the Chinese American, Filipino American, Indian American, and Vietnamese American communities.[2] The U.S. is home to the second largest Korean diaspora community in the world after the People's Republic of China.[3]

While people living in North Korea cannot leave or emigrate from their country with rare exceptions, there are numbers of people of North Korean descent living in the U.S., usually as refugees.

Korean Americans have achieved a high demographic profile in some U.S. cities, including New York City.

The two metropolitan areas with the highest Korean American populations as per the 2009 American Community Survey were the Greater Los Angeles Combined Statistical Area (300,047) and the Greater New York Combined Statistical Area (201,393),[4] home to the largest and second largest populations of ethnic Koreans outside of Korea, respectively. The Baltimore-Washington Metropolitan Area ranks third, with approximately 93,000 Korean Americans.[5]

The per capita Korean American population of Bergen County, New Jersey, in the New York City Metropolitan Area, 6.3% by the 2010 United States Census,[6] is the highest of any county in the United States, with eight of the nation's top ten municipalities by percentage of Korean population;[7] while the concentration of Korean Americans in Palisades Park, New Jersey, within Bergen County, is the highest of any municipality in the United States,[8] at 52% of the population.[9] Between 1990 and 2000, Georgia was home to the fastest-growing Korean community in the U.S., growing at a rate of 88.2% over that decade.[10] 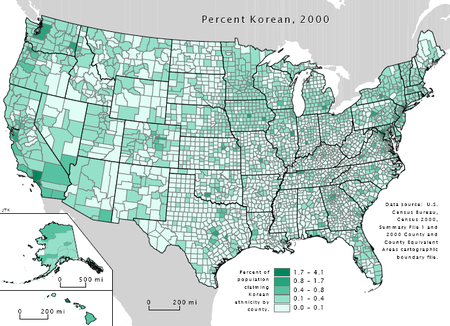 According to the statistics of the Overseas Korean Foundation and South Korea's Ministry of Foreign Affairs and Trade, 107,145 South Korean children were adopted into the United States between 1953-2007.[11]

In 1884, two American missionaries went to Korea: Henry Appenzeller, a Methodist, and Horace Underwood, a Presbyterian.[1] Emphasizing the mass-circulation of the Bible (which had been translated into Korean between 1881 and 1887 by the Reverend John Ross, a Scottish Presbyterian missionary in Manchuria), the Protestant pioneers also established the first modern educational institutes in Korea.[2] The Presbyterian Paichai School (배재고등학교) for boys was founded in 1885, and the Methodist Ehwa girls' school (이화여자고등학교) followed a year later. These, and similar schools established soon afterwards, facilitated the rapid expansion of Protestantism among the common people, and in time enabled the Protestant faith to overtake Catholicism as the leading Christian branch in Korea.

One of the first Korean Americans was Seo Jae-pil, or Philip Jaisohn, who came to America shortly after participating in a coup with other progressives to institute political reform in 1884. He became a citizen in 1890, and earned a medical degree 1892 from what is now George Washington University. Throughout his life, he strove to educate Koreans in the ideals of freedom and democracy, and pressed the U.S. government for Korean independence. He died during the Korean War. His home is now a museum, cared for by a social services organization founded in his name in 1975.

A prominent figure among the Korean immigrant community is Ahn Chang Ho, pen name Dosan, a Protestant social activist. He came to the United States in 1902 for education. He founded the Friendship Society in 1903 and the Mutual Assistance Society. He was also a political activist during the Japanese occupation of Korea. There is a memorial built in his honor in downtown Riverside, California and his family home on 36th Place in Los Angeles has been restored by University of Southern California. The City of Los Angeles has also declared the nearby intersection of Jefferson Boulevard and Van Buren Place to be "Dosan Ahn Chang Ho Square" in his honor. The Taekwondo pattern Do-san was named after him. 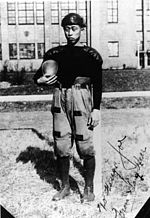 Another prominent figure among the Korean immigrant community was Syngman Rhee (이승만), a Methodist.[3] He came to the United States in 1904 and earned a bachelor's degree at George Washington University and a Ph.D. from Princeton University. In 1910, he returned to Korea and became a political activist during Japanese occupation of Korea. He later became the first president of South Korea.

The first group of Korean laborers came to Hawaii in January 1903 to fill in gaps created by problems with Chinese and Japanese laborers. Between 1904 and 1907 about 1,000 Koreans entered the mainland from Hawaii through San Francisco.[13] Many Koreans dispersed along the Pacific Coast as farm workers or as wage laborers in mining companies and as section hands on the railroads. Picture brides became a common practice for marriage to Korean men.

After the annexation of Korea by Japan in 1910, Korean migration to the United States was virtually halted. The Immigration Act of 1924 or sometimes referred to as the Oriental Exclusion Act was part of a measured system excluding Korean immigrants into the US. In 1952 with the Immigration and Nationality Act of 1952, opportunities were more open to Asian Americans, enabling Korean Americans to move out of enclaves into middle-class neighborhoods. When the Korean War ended in 1953, small numbers of students and professionals entered the United States. A larger group of immigrants included the wives of U.S. servicemen. As many as one in four Korean immigrants in the United States can trace their immigration to the wife of a serviceman. With the passage of the Immigration and Nationality Act of 1965, Koreans became one of the fastest growing Asian groups in the United States, surpassed only by Filipinos.

In 1965, the Immigration Act abolished the quota system that had restricted the numbers of Asians allowed to enter the United States. Large numbers of Koreans, including some from North Korea that had come via South Korea, have been immigrating ever since, putting Korea in the top five countries of origin of immigrants to the United States since 1975. The reasons for immigration are many including the desire for increased freedom and the hope for better economic opportunities. 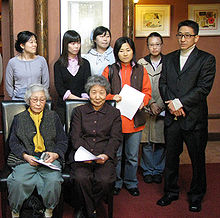 A wide range of Korean Americans

In the 1980s and 1990s Koreans became noted not only for starting small businesses such as dry cleaners or convenience stores, but also for diligently planting churches, with the same fervor as the early Puritan fathers who came to New England. With fervent piety and hope of that Promised Land, they would venture into abandoned cities and start up businesses which happened to be predominantly African American in demographics. This would sometimes lead to publicized tensions with customers as dramatized in movies such as Spike Lee's Do the Right Thing, and the LA Riots of April 1992.

Their children, along with those of other Asian Americans, would also be noted in headlines and magazine covers in the 1980s for their numbers in prestigious universities and highly skilled white collar professions. Favorable economics and education have led to the painting of Asian groups such as the Koreans as a "model minority". Throughout the 1980s until today, Korean Americans and other East Asian groups continue to attend prestigious universities in high numbers and make up a large percentage of the professional white collar work force including such fields as medicine, law, computer science, finance, and investment banking.

Los Angeles has emerged as a major center of the Korean American community. Its "Koreatown" is often seen as the "overseas Korean capital." It experienced rapid transition in the 1990s, with heavy investment by Korean banks and corporations, and the arrival of tens of thousands of Koreans, as well as even larger numbers of Hispanics.[14][15] Many entrepreneurs opened small businesses, and were hard hit by the 1992 Los Angeles riots.[16]

According to Park (1998) the violence against Korean Americans in 1992 stimulated a new wave of political activism among Korean Americans, but it also split them into two main camps. The "liberals" sought to unite with other minorities in Los Angeles to fight against racial oppression and scapegoating. The "conservatives," emphasized law and order and generally favored the economic and social policies of the Republican Party. The Conservatives tended to emphasize the political differences between Koreans and other minorities, specifically blacks and Hispanics.[17] Abelmann and Lie, (1997) report that the most profound result was the politicization of Korean Americans, all across the U.S. The younger generation especially realized they had been too uninvolved in American politics, and the riot shifted their political attention from South Korea to conditions in the United States.[18]

In recent years, ethnic Koreans such as Korean Mexicans and Korean Brazilians emigrated to the U.S. bringing further diversity to the Korean-American community. There has been an intermingling of Korean and Central American cultures together with some ethnic intermarriage between Koreans and Central Americans.

A substantial number of affluent Korean American professionals have settled in Bergen County, New Jersey since the early 2000s and have founded various academically and communally supportive organizations, including the Korean Parent Partnership Organization at the Bergen County Academies magnet high school[19] and The Korean-American Association of New Jersey.[20] Bergen County's Broad Avenue Koreatown in Palisades Park[21] has emerged as a dominant nexus of Korean American culture.[22] Bergen County's growing Korean community[23][24] was cited by county executive Kathleen Donovan in the context of Hackensack, New Jersey attorney Jae Y. Kim's appointment to Central Municipal Court judgeship in January 2011.[25] According to The Record of Bergen County, the U.S. Census Bureau has determined the county’s Korean American population – 2010 census figures put it at 56,773 – has grown enough to warrant language assistance during elections.[26]

In a poll from the Asia Times before the 2004 U.S. Presidential Election, Korean Americans narrowly favored Republican candidate George W. Bush by a 41% to 38% margin over Democrat John Kerry, with the remaining 19% undecided or voting for other candidates.[27] In the 2008 U.S. Presidential Election, Korean Americans favored Democrat Barack Obama over Republican John McCain, around 59% to 41%.[28] However, there are still more registered Republican Korean Americans than registered Democrats. Korean-Americans, due to their Republican and Christian leanings, overwhelmingly supported California's constitutional gay marriage ban, Proposition 8.[29]

Korean Americans in America have historically had a very strong Christian heritage. Between 70% and 80% identify as Christian; 40% of those consist of immigrants who were not Christians at the time of their arrival in the United States. There are about 2,800 Korean Christian churches in the United States, as compared to only 89 Korean Buddhist temples; the largest such temple, Los Angeles' Sa Chal Temple, was established in 1974.[30] Reasons for the conversion of immigrant Korean families to Christianity include the responsiveness of Christian churches to immigrant needs as well as their communal nature, whereas Buddhist temples foster individual spirituality and practice and provide fewer social networking and business opportunities, as well as social pressure from other Koreans to convert.[31]

"Korean American cuisine" can be described as a fusion of traditional Korean cuisine with American culture and tastes.[32] Dishes such as "Korean tacos" have emerged from the contacts between Korean bodega owners and their Mexican workers in the Los Angeles area, spreading from one food truck (Kogi Korean BBQ) in November 2008 to the national stage eighteen months later.[33]

Often, chefs borrow from Korean flavors and preparation techniques that they will integrate it into the style they are most comfortable with (whether it be Tex-Mex, Chinese, or purely American). Even a classic staple of the American diet, the hamburger, is available with a Korean twist – bulgogi (Korean BBQ) burgers.

The 1997 U.S. Economic Census confirmed many of the anecdotal pictures of Korean business patterns that have been reported in Korean newspapers. With more than 155,000 businesses, Koreans rank third among APAs, after the Chinese and Indians. But their tendency to enter into business is one of the highest among all minority ethnic/racial groups. For instance, the rate of Korean business ownership is 71 percent higher than their share of the population, highest of all the major Asian ethnic groups.