M-1 (Michigan highway)
This article is about the state highway in Michigan; for other uses, see List of M1 roads

M-1, commonly known as Woodward Avenue, named for Augustus B. Woodward, is a north–south state trunkline in the US state of Michigan. Until a few years ago, the northern terminus of M-1 was at BL I-75 and BUS US 24 (Square Lake Road) in Bloomfield Township between the city limits of Bloomfield Hills and Pontiac in Oakland County. Woodward has now been extended north into central Pontiac over what once was called Wide Track Drive. The southern end of M-1 is in downtown Detroit at Adams Avenue; however, Woodward Avenue extends further south in Detroit to Jefferson Avenue.

Woodward Avenue has been the main artery of Detroit's transportation network since the incorporation of the modern plan of the city in 1805 and it therefore holds considerable cultural significance. Woodward was planned to be the most important of the five major avenues (along with Michigan, Grand River, Gratiot, and Jefferson) planned by Judge Augustus Woodward that extend from downtown Detroit in differing directions. Woodward runs north-northwest from the city's downtown area, while Grand River Avenue extends further west. 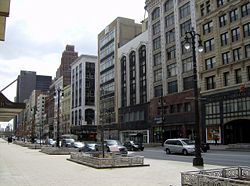 Many historical sites are located along Woodward Avenue, and the road was designated a Michigan Heritage Route by the Michigan Department of Transportation-Design Division in July 1999 and as a National Scenic Byway by the Federal Highway Administration National Scenic Byways Program on June 13, 2002.

In 1909, the stretch of Woodward Avenue between Six Mile and Seven Mile Roads became the first mile of road in the world to be paved with concrete. 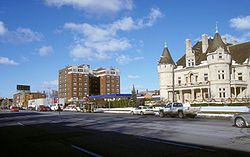 The Woodward Dream Cruise takes place on Woodward Avenue between Pontiac and Ferndale in Oakland County during the middle of summer. The annual event draws thousands of classic car owners and admirers from all over the United States and the world to the Metro Detroit area to celebrate Detroit's automotive history. The event evokes nostalgia of the 1950s and '60s, when it was common for young drivers to "cruise" with their cars on Woodward Avenue. 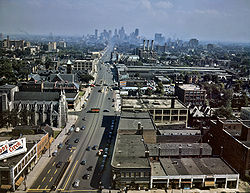 Looking south down Woodward Avenue from the Maccabees Building with the Detroit skyline in the distance, July 1942. The Edwin S. George Building is on the left, about ⅔ of the way up.

M-1 was designated by the Michigan Department of Transportation (MDOT) in 1970. Prior to that, Woodward Avenue was designated as US 10. Between Jefferson Avenue and Grand River Avenue, Woodward at one time carried three US routes — US 10, US 12, and US 16, as all three terminated at the junction with US 25, which was routed on Jefferson at the time. All of Woodward Avenue, through "The Loop" in downtown Pontiac, was designated US 10, which extended northward along Dixie Highway.

A bypass of downtown Birmingham opened in 1939, drawing through traffic away from the busy Woodward Avenue-Maple Road intersection. The bypass, which carried the US 10 (and later M-1) designation, was named Hunter Boulevard. In 1996, though, the bypass would be renamed Woodward Avenue, with the previous alignment of Woodward being signed as Old Woodward.

In 1970, US 10 was rerouted to the John C. Lodge Freeway and the portion of Jefferson Avenue between the Lodge and Randolph Street. At the time, there were no single-digit state routes in Michigan, as in 1939, the single-digit numbers (M-X) were reserved by MDOT to be used for future superhighways to be built across the state. Since these superhighways eventually became Interstate and U.S. routes, the single-digit numbers remained unused until MDOT selected M-1 to represent Detroit's "Main Street" to replace US 10. M-1 was designated for the portion of Woodward Avenue from Jefferson Avenue in downtown Detroit, to Square Lake Road along the south border of Pontiac. Woodward north of Square Lake Road was concurrent with business routes of US 10 and I-75. When US 10 was truncated to Bay City in 1986, the BUS US 10 portion of Woodward became BUS US 24. Woodward Avenue is part of the Saginaw Trail and part of the Dixie Highway.

In the late 1970s, M-1 was truncated in downtown Detroit, as the Woodward Mall area was designated in the area around Cadillac Square. Official MDOT maps and other maps made between the 1970s and the 1990s had conflicting information regarding the routing and terminus of M-1, which had previously reached Jefferson Avenue. In 2001, the southern terminus of M-1 was set at Grand River Avenue, in a spate of jurisdiction transfers between the City of Detroit and MDOT. In 2004, however, the terminus was moved north three blocks to Adams Avenue.