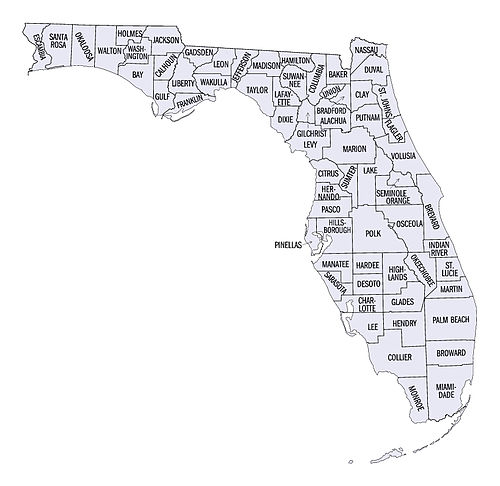 There are 67 counties in the U.S. state of Florida. It was a territory of the U.S. in 1821 and started with two counties: Escambia to the west and St. Johns to the east, divided by the Apalachicola River. All of the other counties were apportioned from these two original counties. Florida became the 27th U.S. state in 1845, and its last county was created in 1925 with the formation of Gilchrist County from a segment of Alachua County.[1] Florida's counties were originally subdivisions of the state government. In 1968, counties gained the power to develop their own charters.[2]

Most of Florida's counties are named for local or national political leaders. Some are named for Spanish explorers or conquistadors, marking the influence of 200 years of Spanish rule. Natural features of the region, including rivers, lakes, and flora, are also commonly used for county names. Florida has counties named for participants on both sides of Second Seminole War: Miami-Dade County is partially named for Francis L. Dade, a Major in the U.S. Army at the time; Osceola County is named for a Native American resistance leader during the war.[3]

The Federal Information Processing Standard (FIPS) is used by the U.S. government to uniquely identify counties, and is provided for each entry. These codes link to the United States Census Bureau's "quick facts" for each county. Florida's FIPS code of 12 is used to distinguish from counties in other states. For example, Alachua County's unique nationwide identifier is 12001.[6]

Five counties in Florida have been renamed. Most renamings occurred between 1845 and 1861, during the first sixteen years of Florida's statehood. One occurred in 1997, when Dade County changed its name to Miami-Dade County.

Two counties were proposed in Florida's state legislature, but neither actually became counties. A bill was passed by the legislature to create Bloxham County, but residents did not vote to approve it. See Leigh Read County, Florida for the events surrounding the proposed county.