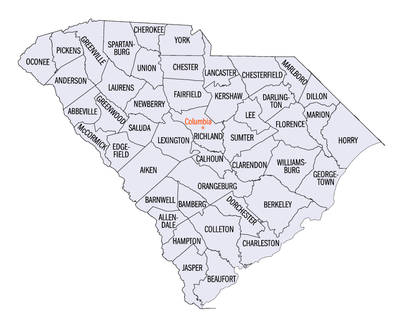 Map of the counties of South Carolina

In the colonial period, the land around the coast was divided into parishes corresponding to the parishes of the Church of England. There were also several counties that had judicial and electoral functions. As people settled the backcountry, judicial districts and additional counties were formed. This structure continued and grew after the Revolutionary War. In 1800, all counties were renamed as districts. In 1868, the districts were converted back to counties.[1] The South Carolina Department of Archives and History has maps that show the boundaries of counties, districts, and parishes starting in 1682.[2]