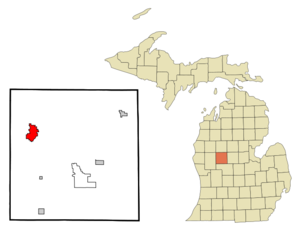 Big Rapids is a city in the of . As of the 2000 census, the city population was 10,849. It is the of Mecosta CountyGR|6. The city is located within Big Rapids Township, but is politically independent.

According to the , the city has a total area of 4.4 s (11.4 ), of which, 4.2 square miles (11.0 km²) of it is land and 0.2 square miles (0.4 km²) of it (3.42%) is water. Like most of the central Michigan area, it lies on the ancient sea bed and has a sandy subsoil which lies above an iron ore base. The Muskegon River runs through Big Rapids, passing both the University and the local middle school on its way to Lake Michigan. Numerous small lakes are within a few miles of the city.

There were 3,388 households out of which 25.5% had children under the age of 18 living with them, 26.5% were married couples living together, 14.3% had a female householder with no husband present, and 56.5% were non-families. 35.7% of all households were made up of individuals and 9.8% had someone living alone who was 65 years of age or older. The average household size was 2.26 and the average family size was 2.93.

In 1955 the city had a centennial celebration, recalling the fact that there were once 27 saloons in Big Rapids. They were frequented primarily by loggers and the like. At the centennial, there was a beer drinking contest and a beard growing contest. The beard growing contest was won by Porter J. Holman, a local resident of Belgian descent. The other events have been lost in the mists of time.

Big Rapids High School -- Within a few years after its opening in 1964, BRHS was struck by a tornado. Miraculously, the roof of the gymnasium remained intact.

St. Mary's Catholic School is on Marion Avenue, adjacent the parish church. The original structure, an attractive romanesque brownstone with a bell tower, was torn down in the mid-1960's and replaced by a mid-century modern brick church.