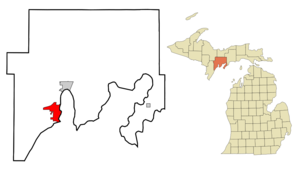 The word "Escanaba" roughly translates from various regional native languages to "land of the red buck" while others maintain that it refers to "flat rock". Escanaba began as a port town in the mid 1800s, gaining importance to the Union as a shipping point for iron ore, lumber and copper during the Civil War. In his poem "", described how "crossed the rushing Esconaba" referring to the river. Located on at the northern edge of , Escanaba continues to serve as an important shipping point for iron ore to other Great Lakes ports, especially south to and northern Indiana. The local paper mill, for many years Mead Corporation's Publishing Paper Division, is currently operated by NewPage Corporation; located on the outskirts of the city alongside the Escanaba River, it is now the areas largest employer.

The city is served by , with flights daily to Minneapolis/St.Paul and Detroit via

There were 5,800 households out of which 26.6% had children under the age of 18 living with them, 42.2% were married couples living together, 11.2% had a female householder with no husband present, and 43.2% were non-families. 37.0% of all households were made up of individuals and 18.1% had someone living alone who was 65 years of age or older. The average household size was 2.19 and the average family size was 2.88.

Escanaba is located in Michigan Congressional District 1; its current Representative in Congress is (D), a former Michigan State Trooper.

Although politically a part of the state of Michigan, Escanaba and the western Upper Peninsula of Michigan have closer cultural ties to the state of . Tourism has become significant for the local economy. Tourist draws include beaches and local fishing and hunting opportunities. Most visitors come from Wisconsin and . One interesting visit came in January 1968 when football legend 's daughter was married in secret at St. Anne's Church. After finding out his then-unwed daughter was pregnant, Lombardi, who was vacationing in Florida at the time, had insisted she drive to Michigan to get married rather than doing it Green Bay, in order to keep the news out of the papers.

Escanaba's major retail center is the Delta Plaza Mall, a small enclosed which features , , and as its s.

Since the name Escanaba may be derived from "Flat Rock" and another city in Michigan exists with such a name, errors on maps of Michigan are still common. [ [http://www.mapquest.com/maps/map.adp?formtype=address&country=US&pop

] ] [ [http://maps.google.com/maps?f=q&hl=en&q=ESCANABA,+MI&ie=UTF8&om=0&ll=45.833942,-87.18235&spn=0.033967,0.086346&z=13&iwloc=addr Flat Rock (Delta County) from Google Maps.] ] On most online maps the location of Flat Rock is on J Road between 20th and 21st. In addition, a school named "Flat Rock Elementary School" exists in both the Upper (Delta County) and Lower peninsula (Wayne County), [ [http://michigan.schooltree.org/Delta-County-Schools.html Delta County Schools] ] sometimes causing confusion in reporting of MEAP scores and other standardized test results.fact|date=November 2007

Escanaba was the location for both the story & filming of "", a 2001 film starring Michigan resident .

In the film "M*A*S*H", Escanaba is one of the towns listed on the 4077th's famous signpost.