pronunciation (help·info)), officially called the euro area,[8] is an economic and monetary union (EMU) of seventeen European Union (EU) member states that have adopted the euro (€) as their common currency and sole legal tender. The eurozone currently consists of Austria, Belgium, Cyprus, Estonia, Finland, France, Germany, Greece, Ireland, Italy, Luxembourg, Malta, the Netherlands, Portugal, Slovakia, Slovenia, and Spain. Most other EU states are obliged to join once they meet the criteria to do so. No state has left and there are no provisions to do so or to be expelled.

Monetary policy of the zone is the responsibility of the European Central Bank (ECB) which is governed by a president and a board of the heads of national central banks. The principal task of the ECB is to keep inflation under control. Though there is no common representation, governance or fiscal policy for the currency union, some co-operation does take place through the Euro Group, which makes political decisions regarding the eurozone and the euro. The Euro Group is composed of the finance ministers of eurozone states, however in emergencies, national leaders also form the Euro Group.

Since the late-2000s financial crisis, the eurozone has established and used provisions for granting emergency loans to member states in return for the enactment of economic reforms. The eurozone has also enacted some limited fiscal integration, for example in peer review of each other's national budgets. The issue is highly political and in a state of flux as of 2011 in terms of what further provisions will be agreed for eurozone reform.

On occasion the eurozone is taken to include non-EU members who use the euro as their official currency. Some of these countries, like San Marino, have concluded formal agreements with the EU to use the currency and mint their own coins.[9] Others, like Montenegro, have adopted the euro unilaterally. However, these countries do not formally form part of the eurozone and do not have representation in the ECB or the Euro Group.[10] 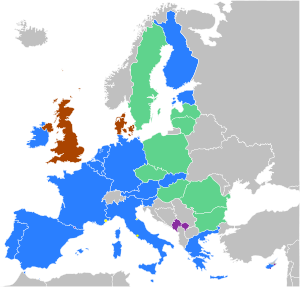 Main article: Enlargement of the eurozone

Ten countries (Bulgaria, the Czech Republic, Denmark, Hungary, Latvia, Lithuania, Poland, Romania, Sweden, and the United Kingdom) are EU members but do not use the euro. Before joining the eurozone, a state must spend two years in the European Exchange Rate Mechanism (ERM II). As of 2011, the National Central Banks (NCBs) of Latvia, Lithuania, and Denmark have participated in ERM II; most remaining currencies are expected to follow soon. 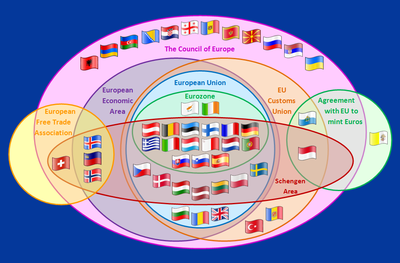 Denmark and the United Kingdom obtained special opt-outs in the original Maastricht Treaty. Both countries are legally exempt from joining the eurozone unless their governments decide otherwise, either by parliamentary vote or referendum. Sweden gained a de facto opt-out by using a legal loophole. It is required to join the eurozone as soon as it fulfils the convergence criteria, which include being part of ERM II for two years; joining ERM II is voluntary.[11][12] Sweden has so far decided not to join ERM II.

The 2008 financial crisis increased interest in Denmark and initially in Poland to join the eurozone, and in Iceland to join the European Union, a pre-condition for adopting the euro.[13] Since Latvia requested help from the International Monetary Fund (IMF), as a precondition, it may be forced to drop its currency peg. This would take Latvia out of ERM II and possibly move the euro adoption date even further from 2013 than currently planned.[14] However, by 2010, the debt crisis in the euro zone caused interest from Poland and the Czech Republic to cool.[15]

Further information: International status and usage of the euro

The euro is also used in countries outside the EU. Three states—Monaco, San Marino, and Vatican City—[16][17] have signed formal agreements with the EU to use the euro and mint their own coins. Nevertheless, they are not considered part of the eurozone by the ECB and do not have a seat in the ECB or Euro Group. Andorra reached a monetary agreement with the EU in June 2011 which will allow it to use the euro as its official currency when ratified. Under the agreement it is intended that Andorra should gain the right to mint its own euro coins as of 1 July 2013, provided that Andorra implements relevant EU legislation.[18]

Some states (viz. Kosovo,[note 7] and Montenegro) officially adopted the euro as their sole currency without an agreement and, therefore, have no issuing rights. These states are not considered part of the eurozone by the ECB. However, in some usage, the term eurozone is applied to all territories that have adopted the euro as their sole currency.[19][20][21] Further unilateral adoption of the euro (euroisation), by both non-euro EU and non-EU members, is opposed by the ECB and EU.[22] 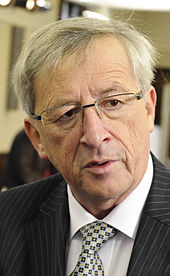 The monetary policy of all countries in the eurozone is managed by the European Central Bank (ECB) and the Eurosystem which comprises the ECB and the central banks of the EU states who have joined the euro zone. Countries outside the eurozone are not represented in these institutions. Whereas all EU member states are part of the European System of Central Banks (ESCB). Non EU member states have no say in all three institutions, even those with monetary agreements such as Monaco. The ECB is entitled to authorise the design and printing of euro banknotes and the volume of euro coins minted, and its president is currently Mario Draghi.

The eurozone is represented politically by its finance ministers, known collectively as the Euro Group, and is presided over by a president, currently Jean-Claude Juncker. The finance ministers of the EU member states that use the euro meet a day before a meeting of the Economic and Financial Affairs Council (Ecofin) of the Council of the European Union. The Group is not an official Council formation but when the full EcoFin council votes on matters only affecting the eurozone, only Euro Group members are permitted to vote on it.[26][27][28]

Since the global financial crisis first began in 2008, the Euro Group has met irregularly not as finance ministers, but as heads of state and government (like the European Council). It is in this forum, the Euro summit, that many eurozone reforms have been agreed. French President Nicolas Sarkozy is pushing, as of 2011, for these summits to become regular and twice a year in order for it to be a 'true economic government'.

On 15 April 2008 in Brussels, Juncker suggested that the eurozone should be represented at the International Monetary Fund as a bloc, rather than each member state separately: "It is absurd for those 15 countries not to agree to have a single representation at the IMF. It makes us look absolutely ridiculous. We are regarded as buffoons on the international scene."[29] However Finance Commissioner Joaquín Almunia stated that before there is common representation, a common political agenda should be agreed.[29]

HICP figures from the ECB, taken from May of each year:[31]

Interest rates for the eurozone, set by the ECB since 1999. Levels are in percentages per annum. Between to June 2000 and October 2008, the main refinancing operations were variable rate tenders, as opposed to fixed rate tenders. The figures indicated in the table from 2000 to 2008 refer to the minimum interest rate at which counterparties may place their bids.[4] 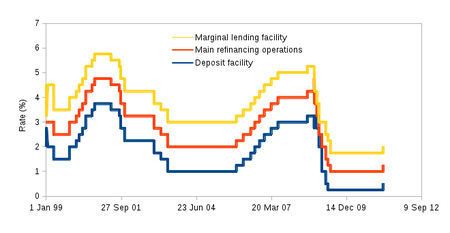 The following table states the ratio of public debt to GDP in percent for EU and other selected European states[dated info]. Eurozone and non-eurozone EU members are marked as Euro and EU respectively. The euro convergence criterion is 60 %.

The primary means for fiscal coordination within the EU lies in the Broad Economic Policy Guidelines which are written for every member state, but with particular reference to the 17 current members of the eurozone. These guidelines are not binding, but are intended to represent policy coordination among the EU member states, so as to take into account the linked structures of their economies.

For their mutual assurance and stability of the currency, members of the eurozone have to respect the Stability and Growth Pact, which sets agreed limits on deficits and national debt, with associated sanctions for deviation. The Pact originally set a limit of 3% of GDP for the yearly deficit of all eurozone member states; with fines for any state which exceeded this amount. In 2005, Portugal, Germany, and France had all exceeded this amount, but the Council of Ministers had not voted to fine those states. Subsequently, reforms were adopted to provide more flexibility and ensure that the deficit criteria took into account the economic conditions of the member states, and additional factors.

The Organisation for Economic Co-operation and Development downgraded its economic forecasts on 20 March 2008 for the eurozone for the first half of 2008. Europe does not have room to ease fiscal or monetary policy, the 30-nation group warned. For the euro zone, the OECD now forecasts first-quarter GDP growth of just 0.5%, with no improvement in the second quarter, which is expected to show just a 0.4% gain.

The late-2000s financial crisis prompted a number of reforms in the eurozone. One was a u-turn on the eurozone's bailout policy that led to the creation of a specific fund to assist eurozone states in trouble. The European Financial Stability Facility (EFSF) and the European Financial Stability Mechanism (EFSM) were created in 2010 to provide, alongside the International Monetary Fund (IMF), a system and fund to bailout members. However the EFSF and EFSM were temporary, small and lacked a basis in the EU treaties. Therefore, it was agreed in 2011 to establish a European Stability Mechanism (ESM) which would be much larger, funded only by eurozone states (not the EU as a whole as the EFSF/EFSM were) and would have a permanent treaty basis. As a result of that its creation involved agreeing an amendment to TEFU Article 136 allowing for the ESM and a new ESM treaty to detail how the ESM would operate. If both are successfully ratified according to schedule, the ESM would be operation by the time the EFSF/EFSM expire in mid-2013.

Strong EU oversight in the fields of taxation and budgetary policy and the enforcement mechanisms that go with it have sometimes been described as potential infringements on the sovereignty of eurozone member states[51] However, in June 2010, broad agreement was finally reached on a controversial proposal for member states to peer review each others' budgets prior to their presentation to national parliaments. Although showing the entire budget to each other was opposed by Germany, Sweden and the UK, each government would present to their peers and the Commission their estimates for growth, inflation, revenue and expenditure levels six months before they go to national parliaments. If a country was to run a deficit, they would have to justify it to the rest of the EU while countries with a debt more than 60% of GDP would face greater scrutiny.[52]

The plans would apply to all EU members, not just the eurozone, and have to be approved by EU leaders along with proposals for states to face sanctions before they reach the 3% limit in the Stability and Growth Pact. Poland has criticised the idea of withholding regional funding for those who break the deficit limits, as that would only impact the poorer states.[52] In June 2010 France agreed to back Germany's plan for suspending the voting rights of members who breach the rules.[53] In March 2011 was initiated a new reform of the Stability and Growth Pact aiming at straightening the rules by adopting an automatic procedure for imposing of penalties in case of breaches of either the deficit or the debt rules.[54][55]