Economy of the European Union

Economy of the European Union

The economy of the combines the economies of 27 member states and is generating an estimated nominal GDP of 12,581 billion (18,493.009 in 2008) according to the . It accounts for about 31% of the world's total economic output. Fifteen member states adopted a single currency, the , managed by the . The EU economy consists of a single market and is represented as a unified entity in the .

The official currency of the European Union is the , used in all its documents and policies. The sets out the fiscal criteria to maintain for and (economic) . The euro is also the most widely used currency in the EU, which is in use in 15 member states known as the . All other member states, apart from and the which have special opt-outs, have committed to changing over to the euro once they have fulfilled the requirements needed to do so - although also has an effective opt-out by choosing when or whether to join the which is the preliminary step towards joining. The remaining states are committed to join the Euro through their Treaties of Accession.

Below is a table showing, respectively, the GDP (PPP) and the GDP (PPP) per capita for the European Union and for each of its 27 member states, sorted by GDP (PPP) per capita. This can be used as a rough gauge to the relative standards of living among member states, with Luxembourg the highest and Bulgaria the lowest. The income of the Bulgarian citizens is not simply the lowest in the European Union, but lower than those of residents of countries outside the EU, such as Croatia. [ [http://www.novinite.com/view_news.php?id=96286 Sofia News Agency, 20 August 2008] ] , based in , is the Official Statistical Office of the releasing yearly GDP figures for the member states as well as the EU as a whole, which are regularly updated, supporting this way a measure of wealth and a base for the European Union's budgetary and economic policies. Figures are stated in euro. All data for 2007 are projections.

These are the official Eurostat figures, as of 21 April 2007. 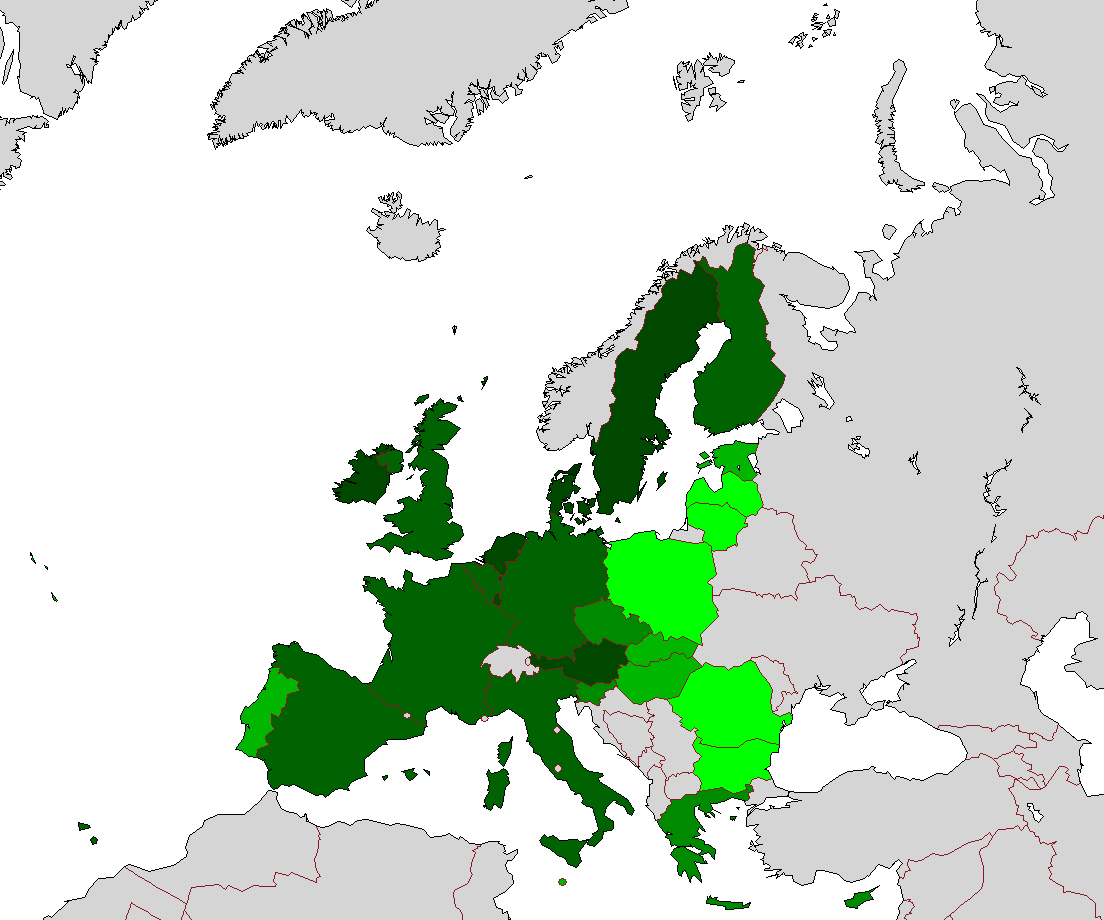 The services sector is by far the most important sector in the European Union, making up 69.4% of GDP, compared to the with 28.4% of GDP and with only 2.3% of GDP.

The sector is supported by from the European Union in the form of the (CAP). This currently represents 40-50% of the EU's total spending. It guarantees a minimum price for in the EU. This is criticised as a form of , inhibiting , and damaging ; one of the most vocal opponents is the UK, the second largest economy within the bloc, which has repeatedly refused to give up the annual unless the CAP undergoes significant reform; France, the biggest benefactor of the CAP and the bloc's third largest economy, is its most vocal proponent.

The European Union is a major tourist destination, attracting visitors from outside of the Union and citizens travelling inside it. Internal tourism is made more convenient for the citizens of some EU member states by the and the . All citizens of the European Union are entitled to travel to any member state without the need of a visa. If the EU component states are considered separate entities, is the world's number one tourist destination for international visitors, followed by , and the at 2nd, 5th and 6th spots respectively. If the EU is considered a single entity, the number of international visitors is less, as most visitors to EU nations are from other EU member states.

Comparing the richest areas of the EU can be a difficult task. This is because the NUTS 1 & 2 regions are not homogenous, some of them being very large regions, such as NUTS-1 (21,100 km²) or NUTS-1 Île-de-France (12,011 km²), whilst other NUTS regions are much smaller, for example NUTS-1 (755 km²) or NUTS-1 (1,580 km²). An extreme example is , which is divided for historical reasons into mainland Finland with 5.3 million inhabitants and Åland, an island with a population of 26,700, or about the population of a small Finnish city.

The data is used to define regions that are supported with financial aid in programs such as the .

The decision to delineate a (NUTS) region is to a large extent arbitrary (i.e. not based on objective and uniform criteria across Europe), and is decided at an level (See also: Regions of the European Union).

The 10 NUTS-1 and NUTS-2 regions with the highest GDP per capita are all in the first fifteen member states: none are in the 12 new member states that joined in May 2004 and January 2007. The NUTS Regulation lays down a minimum population size of 3 million and a maximum size of 7 million for the average NUTS-1 region, whereas a minimum of 800.000 and a maximum of 3 million for NUTS-2 regions ¹ [http://epp.eurostat.ec.europa.eu/extraction/retrieve/en/theme1/reg/reg_e3gdp?OutputDir=EJOutputDir_349&user=unknown&clientsessionid=19A1061DE7EB55F2E04BD008A91F53DF.extraction-worker-1&OutputFile=reg_e3gdp.htm&OutputMode=U&NumberOfCells=3868&Language=en&OutputMime=text%2Fhtml&] . This definition, however, is not respected by Eurostat. E.g.: the "" of Île-de-France, with 11.6 million inhabitants, is treated as a NUTS-2 region, while the state of Bremen, with only 664,000 inhabitants, is treated as a NUTS-1 region.

*fnb|1 One region may be classified by Eurostat as a NUTS-1, NUTS-2 as well as a NUTS-3 region. Several NUTS-1 regions are also classified as NUTS-2 regions such as Brussels-Capital or Ile-de-France. Many countries are only classified as a single NUTS-1 and a single NUTS-2 region such as Latvia, Lithuania, Luxemburg and (although over 3 million inhabitants) Denmark.
*cite web|url=http://epp.eurostat.ec.europa.eu/pls/portal/docs/PAGE/PGP_PRD_CAT_PREREL/PGE_CAT_PREREL_YEAR_2005/PGE_CAT_PREREL_YEAR_2005_MONTH_07/2-18072005-EN-AP.PDF|title=Euro-indicators News release|work=June 2005 inflation data|accessmonthday=July 18 |accessyear=2005
*cite web|url=http://epp.eurostat.ec.europa.eu/pls/portal/docs/PAGE/PGP_PRD_CAT_PREREL/PGE_CAT_PREREL_YEAR_2005/PGE_CAT_PREREL_YEAR_2005_MONTH_07/3-01072005-EN-AP.PDF|title=Euro-indicators News release|work=May 2005 unemployment data|accessmonthday=July 18 |accessyear=2005
*cite web|url=http://www.worldbank.org/data/quickreference/quickref.html|title=World Bank|work=GNI data (July 2005)|accessmonthday=August 4 |accessyear=2005