The CFP franc (called the franc in everyday use) is the currency used in the French overseas collectivities (collectivités d’outre-mer, or COM) of French Polynesia, New Caledonia and Wallis and Futuna. The initials CFP originally stood for Colonies Françaises du Pacifique (“French colonies of the Pacific”). This was later changed to Communauté Financière du Pacifique (“Pacific Financial Community”) and then to the present official term, Comptoirs Français du Pacifique (“French Pacific Banking Agreement”). The ISO 4217 currency code is XPF.

The CFP franc has been issued by the IEOM (Institut d’émission d’outre-mer, “Overseas Issuing Institute”) since 1967. The IEOM has its headquarters in Paris.

In 1969, the New Hebrides franc was separated from the CFP franc and was replaced by the Vanuatu vatu in 1982. 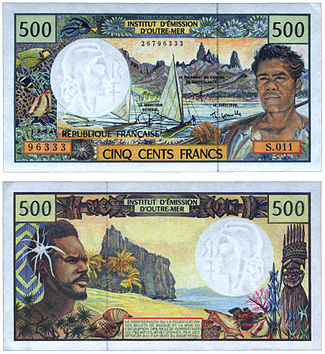 The 1960 and 1999 events are merely changes in the currency in use in France; the relative value of the CFP franc (XPF) vs. the French franc / euro is unchanged since 1949.

In 1949, New Caledonia and what was then called French Oceania (now French Polynesia) began to issue coins. The coins have been separated in two types: the obverses are identical, whilst the reverses are distinct. Both types of coins can be used in all three French territories. The situation of the CFP coins is thus quite similar to that of the euro coins, which have a national side but can be used in all countries of the euro zone.

The New Hebrides franc had a different history of coin issuance before being replaced by the Vanuatu vatu in 1982.

The IEOM began issuing banknotes in New Hebrides in 1965, and in New Caledonia and French Polynesia in 1969. In 1985, a new banknote, the 10,000 francs, was introduced which did not bear any distinguishing mark and was common to both French Polynesia and New Caledonia. These were followed, between 1992 and 1996, by 500, 1000 and 5000 franc notes for all of the French Pacific Territories.

Before the French regulated the currency on Tahiti, French Polynesia, traders often used dollars. The word “dollar” became tārā (often written without accents as tara, or tala), and this term is still used among native Tahitian and local Chinese traders as an unofficial unit, worth 5 francs. Thus for a price of 200 francs, one would say tārā e maha-ʻahuru (40 tārā) in Tahitian. The currency of Samoa is also called the tālā.