Religion in the European Union

Religion in the European Union

in the is diverse, although primarily . The European Union is secular, despite there being state churches (typically Protestant) in a number of the member countries, for example the . In recent times, there has been an increase in secularisation in many countries in EU, while others have not experienced such developments. 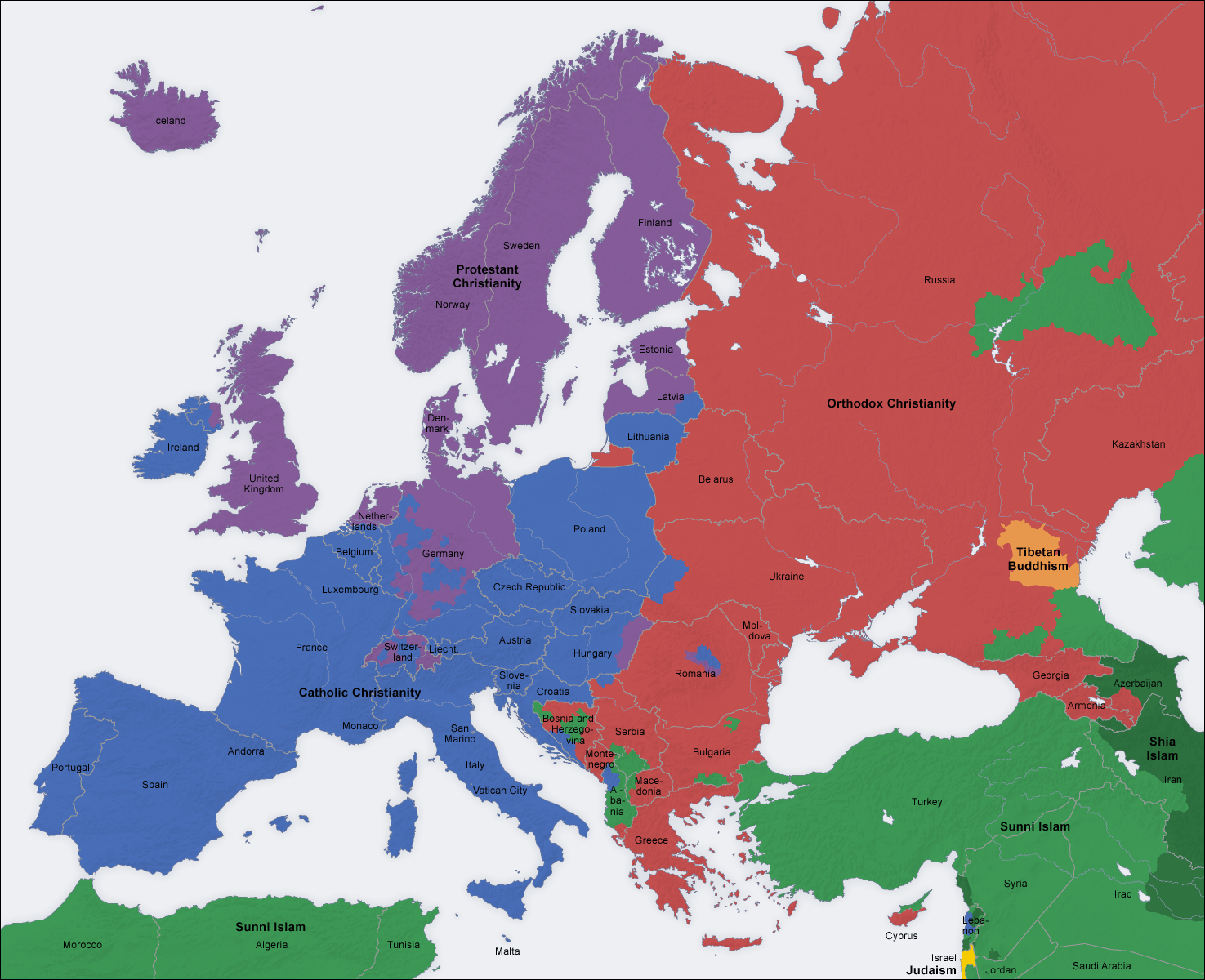 The most common religious belief in the EU is Christianity. European Christianity can be roughly divided into , a wide range of Protestant churches (especially in northern Europe) and (in south eastern Europe).

has had a long, and in the past frequently dark, history in Europe. In 2002 the EU had an estimated of roughly over a million, including about 519,000 in France and about 273,500 in the United Kingdom (compare with about 5 million Jews living in . [Jewish population figures may be unreliable. These estimates are taken from: cite web| url = http://www.jafi.org.il/education/100/concepts/demography/demjpop.html | title = World Jewish Population (2002)| accessdate = 2007-05-03| author = Sergio DellaPergola| work = American Jewish Year Book| publisher = The Jewish Agency for Israel] ). In view of the history of persecution of Jews in Europe, remains a matter of attention within the EU. [cite web| url = http://fra.europa.eu/fra/material/pub/AS/Antisemitism_Overview_December_2006_en.pdf |format=PDF| title = Anti-Semitism Summary overview of the situation in the European Union|year = 2006 |month = December | accessdate = 2007-05-04| author = EUMC| publisher = EUMC]

Immigration has introduced other religions into European countries, most notably . It was estimated that the Union's Muslim population in 2006 was 16 million people.

Suspicions of Muslim populations have risen in some Western European countries such as the UK, where 38% see Muslims as a threat to national security. In France, on the other hand, only 21% see Muslims as a threat to their society and 52% say the Muslim community has been unfairly criticised. In both countries however less than a quarter approved of faith schools and a religious presence in schools and workplaces, while in Italy this is not considered to be a problem.

Due to the rise of other religions, and some intolerance towards them, the Commission now regularly meets with different religious leaders.

Other significant religions present in the EU territories are , and . [ [http://www.bbc.co.uk/religion/religions/paganism/ BBC section on Neopaganism] ] Neopaganism is a fast-growing movement that revives and reinvents (in its reconstructionistic approach) the ancient pagan spiritualities of the European peoples. [Strmiska, Michael F. (2005). Modern Paganism in World Cultures: Comparative Perspectives. Santa Barbara: ABC-CLIO.] Neopagan religions are legally recognised by the governments of the , , and .

The EU is a body, i.e., there is a . There are no formal ties to any and no mention of religion in any current or proposed treaty.

In the secularising EU, The Vatican has been vocal against a perceived "militant atheism". It based this on a number of events, for example; the rejection of religious references in the Constitution and Treaty of Lisbon, the rejection by Parliament of as Justice Commissioner in 2004, while at the same time Parliament approved (who is gay

Citizens in countries belonging to EU still have some form of belief system,

Today, is losing prevalence in most (but not all) countries within in favour of secularity. Some countries have experienced a decline in church attendance, as well as a decline in the number of people professing a belief in a God. The [http://ec.europa.eu/public_opinion/archives/ebs/ebs_225_report_en.pdf Eurobarometer Poll 2005] found that, on average, 52% of the citizens of member states state that they believe in a God, 27% believe there is some sort of spirit or life Force while 18% do not believe there is any sort of spirit, God or Life Force. 3% declined to answer. According to a recent study (Dogan, Mattei, Religious Beliefs in Europe: Factors of Accelerated Decline), 47% of Frenchmen declared themselves as agnostic in 2003.The situation of religion varies between countries in European Union.A decrease in religiousness and church attendance in western Europe (especially , and ) has been noted and called "Post-Christian Europe". Contrary to it, there is an increase in Eastern Europe, especially in Greece and Romania (2% in 1 year).

The following is a list of European countries ranked by religiosity, based on belief in a God, according to the [http://ec.europa.eu/public_opinion/archives/ebs/ebs_225_report_en.pdf Eurobarometer Poll 2005] . The 2005 Eurobarometer Poll asked whether the person believed "there is a God", believed "there is some sort of spirit of life force", "didn't believe there is any sort of spirit, God or life force".