GUAM's charter was signed during a summit in Yalta on June 6 to June 7, 2001 by the four current members and Uzbekistan, which later withdrew. According to the former Ukrainian President Viktor Yushchenko the charter set objectives for cooperation, such as promoting democratic values, ensuring stable development, enhancing international and regional security and stepping up European integration.[1] Moldova's 2000 elections were won by the Party of Communists of the Republic of Moldova who have realigned their foreign policy towards Europe shortly before the parliamentary election held in March 2005.

Given the existence of the Russian-led Commonwealth of Independent States (CIS), in Russia GUAM is sometimes seen as a way of countering the Russian influence in the area, and as part of a strategy backed by the United States.[2] However, GUAM leaders repeatedly and officially dismiss such claims and declare their strong willingness to develop close friendly relations with Russia. Moreover, Azerbaijan, the group's main energy power, has managed to avoid any conflicts with Russia in recent years.

GUAM is organized as follows: 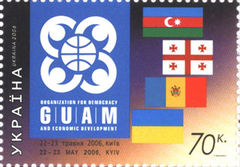 Ukrainian postage stamp commemorating the GUAM Summit held in Kiev, May 22 to May 23, 2006.

Cooperation between Georgia, Ukraine, Azerbaijan, and Moldova started with the GUAM consultative forum, established on October 10, 1997, in Strasbourg and named after the initial letters of each of those countries. In 1999, the organisation was renamed GUUAM due to the membership of Uzbekistan. A summit in Yalta on June 6 to June 7, 2001, was accompanied by the signing of GUUAM's charter which formalized the organization. However in 2002, Uzbekistan announced that it planned to withdraw from the organization, and following this announcement started to ignore GUUAM summits and meetings. On May 24, 2005, shortly after the Andijan massacre, Uzbekistan finally gave an official notice of withdrawal from the organization to the Moldovan presidency, thus changing the group's name back to GUAM.

In the years following the signing of its charter the grouping was generally considered to have stagnated: Among other things, the 2004 meeting in Yalta was only attended by two of the five leaders while the GUUAM official website still showed the old Georgian flag and listed Uzbekistan as a member.

A summit of GUUAM took place in Chişinău, Moldova, on April 22, 2005. The president of Uzbekistan, Islam Karimov failed to attend, as did the president of Poland, Aleksander Kwaśniewski, who had been invited as an observer. The president of Romania, Traian Băsescu, and of Lithuania, Valdas Adamkus, both participated as observers, as did the US Department of State special representative for Eurasian conflicts, Steven Mann, and the OSCE Secretary General Ján Kubiš. The Russian ambassador in Chişinău criticized the fact that Russia was not invited to attend.[3] Ilham Aliyev, the president of Azerbaijan, said after the summit: "Our organization is emerging as a powerful force, participating in resolving problems in the Caspian-Black Sea region" while the president of Ukraine, Viktor Yushchenko, said that a new page had been written in the history of the organization.[4]

From May 22 to May 23, 2006, Ukraine and Azerbaijan announced plans to further increase the GUAM member relations by renaming the organization GUAM Organization for Democracy and Economic Development and establishing its headquarters in the Ukrainian capital.[5] Azerbaijani president Ilham Aliyev was to be elected as the first secretary general of the organization. The other members said this was a remarkable step and development. The summit participants were also expected to adopt GUAM by-laws, a declaration and a communiqué.

On May 30, 2006 the Ukrainian Defense Ministry announced plans to establish GUAM peacekeeping forces.[6]

On June 19, 2007, presidents of Lithuania, Poland and Romania joined the leaders of GUAM member states at the GUAM summit in Baku, Azerbaijan.[7] Participating at the summit were also the Vice-President of Bulgaria, Vice-Speaker of Estonian parliament, Minister of Economy of Latvia, and the high-level representatives of the United States, Japan, OSCE, the Organization of the Black Sea Economic Cooperation (BSEC), UNESCO, and heads of diplomatic missions accredited in Azerbaijan.[8]

On April 21, 2005, the GUAM countries formed a common front on several issues in the CIS Foreign Ministers Council that was held at that time in Moscow. Ukraine, Georgia and Moldova lodged complaints against restriction imposed by Russia against some of their national products. At the same time, the four GUAM countries made a proposal to discuss the "frozen conflicts" of Transnistria, Abkhazia, South Ossetia (which remain under de facto Russian military control) and Nagorno-Karabakh. Lastly the other three GUAM nations supported Ukraine's proposal to condemn the Holodomor, the 1930s famine in Ukraine, as a genocide.[9]

Another of the issues associated with GUAM is competition between two proposed transportation corridors to better link Europe with Asia. Russia, Azerbaijan, and Iran have already been through rounds of negotiation on their plan, the North-South Transportation Corridor (INSTC); neighbouring countries (formerly, but no longer with the understandable exception of Armenia) have expressed enthusiasm as well. This corridor would travel along the border between Russia and the Baltic states of the European Union, then continue south through Ukraine. The United States would prefer the critical transportation corridor bypass both Russia and Iran. The plan proposed to GUAM by the United States crosses both the Black Sea and the Caspian Sea.