Professor Jacqueline McGlade is the current Executive Director of the agency.

As an EU body, member states of the European Union are automatically members; however the Council Regulation establishing it provided that other states may become members of it by means of agreements concluded between them and the EU.

It was the first EU body to open its membership to the 13 candidate countries (pre-2004 enlargement).

EEA is an active member of the EPA Network[2]

European Topic Centre on Land Use and Spatial Information

ETC-LUSI is part of the European Environmental Information and Observation Network (EIONET)[4] and a support to other Eionet partners. The activities have an important component on networking with various experts in the member countries on data harmonisation, quality issues and exchange of data and in capacity building. ETC-LUSI assists countries in discussing options for improving national information systems related with the topic “land use and spatial information”. 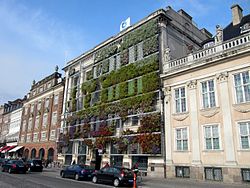 The EEA's building on Kongens Nytorv in Copenhagen

The European Topic Centre on Air and Climate Change (ETC/ACC) assists the European Environment Agency (EEA) in its support of European Union (EU) policy in the field of air pollution and climate change. It is a consortium of 14 European institutions, established in 2001 by the EEA, with an annual budget of about 2 millions Euros, with RIVM-MNP as the lead institution. In March 2004 the EEA extended the contract with the consortium through 2006.

The ETC/ACC reports on the progress of EU environmental policy on air pollutant emissions,[5] air quality, and climate change issues. The ETC/ACC participates in relevant reports issued by the EEA, collects data concerning the current state of the environment, and harmonises European air quality monitoring networks and reporting obligations.

The ETC/ACC also maintains an online copy of the Model Documentation System (MDS)[6] which is a catalogue of most of the air quality and air pollution dispersion models developed and/or used in Europe. The MDS catalogue listings include the name, description and support contacts for each model as well as other pertinent technical details. The MDS was developed at the Aristotle University in Thessaloniki, Greece, by Prof. Nicolas Moussiopoulos.

DISCOMAP is the new gis geonode of the EEA. It is hosting many different map services which can be used for free. This covers biodiversity, air, water and land.

In addition to its 32 member and six cooperating countries (from the Western Balkans), the EEA also cooperates and fosters partnerships with its neighbours and other countries and regions, mostly in the context of the European Neighbourhood Policy:[10]

Additionally the EEA cooperates with multiple international organizations and the corresponding agencies of the following countries: