The franc (sign: Fr. or SFr.; German: Franken, French and Romansh: franc, Italian: franco; code: CHF) is the currency and legal tender of Switzerland and Liechtenstein; it is also legal tender in the Italian exclave Campione d'Italia. Although not formally legal tender in the German exclave Büsingen (the sole legal currency is the euro), it is in wide daily use there. The Swiss National Bank issues banknotes and the federal mint Swissmint issues coins.

The Swiss franc is the only version of the franc still issued in Europe. The smaller denomination, a hundredth of a franc, is a Rappen (Rp.) in German, centime (c.) in French, centesimo (ct.) in Italian, and rap (rp.) in Romansh. The ISO code of the currency used by banks and financial institutions is CHF, although "Fr." is used by most businesses and advertisers; some use SFr.; the Latinate "CH" stands for Confoederatio Helvetica.

Given the quadrilingual populace, Latin is used for language-neutral inscriptions on the coins.

Before the Helvetic Republic

Before 1798, about 75 entities were making coins in Switzerland, including the 25 cantons and half-cantons, 16 cities, and abbeys, resulting in about 860 different coins in circulation, with different values, denominations and monetary systems.[3]

In 1798, the Helvetic Republic introduced a currency based on the Berne thaler, subdivided into 10 batzen or 100 rappen. The Swiss franc was equal to 6¾ grams pure silver or 1½ French francs.[4]

Franc of the Swiss confederation, 1850–

Although 22 cantons and half-cantons issued coins between 1803 and 1850, less than 15% of the money in circulation in Switzerland in 1850 was locally produced, with the rest being foreign, mainly brought back by mercenaries. In addition, some private banks also started issuing the first banknotes, so that in total, at least 8000 different coins and notes were in circulation at that time, making the monetary system extremely complicated.[5][6]

In order to solve this problem, the new Swiss Federal Constitution of 1848 specified that the Federal Government would be the only entity allowed to make money in Switzerland. This was followed two years later by the first Federal Coinage Act, passed by the Federal Assembly on 7 May 1850, which introduced the franc as the monetary unit of Switzerland. The franc was introduced at par with the French franc. It replaced the different currencies of the Swiss cantons, some of which had been using a franc (divided into 10 batzen and 100 rappen) which was worth 1½ French francs.

The Swiss franc has historically been considered a safe-haven currency with virtually zero inflation and a legal requirement that a minimum of 40% be backed by gold reserves.[8] However, this link to gold, which dates from the 1920s, was terminated on 1 May 2000 following a referendum.[9] By March 2005, following a gold selling program, the Swiss National Bank held 1,290 tonnes of gold in reserves which equated to 20% of its assets.[10]

In March 2011 the franc climbed past the US$1.10 mark (CHF 0.91 per U.S. dollar). In June 2011 the franc climbed past US$1.20 (CHF 0.833 per U.S. dollar) as investors sought safety amidst the continuation of the Greek sovereign-debt crisis.[11] Continuation of the same crisis in Europe and the debt crisis in the U.S. propelled the Swiss franc past US$1.30 (CHF 0.769 per U.S. dollar) as of August 2011, prompting the Swiss National Bank to boost the franc's liquidity in an attempt to counter its "massive overvaluation".[12] The Economist argued that its Big Mac Index in July 2011 indicated an overvaluation of 98% over the dollar and cited Swiss companies releasing profit warnings and threatening to move operations out of the country due to the strength of the franc.[13] Demand for francs and franc-denominated assets was so strong that nominal short-term Swiss interest rates became negative.[14]

On 6 September 2011 the SNB set a minimum exchange rate of 1.20 francs to the euro saying "the value of the franc is a threat to the economy",[15] and that it was "prepared to buy foreign currency in unlimited quantities."[16] In response to the announcement the franc fell against the euro, to 1.22 francs from 1.12 francs[17] and lost 9% against the U.S. dollar within fifteen minutes.[18] The intervention stunned currency traders since the franc had long been regarded as a safe haven.[19]

The franc fell 8.8% against the euro, 9.5% against the dollar, and at least 8.2% against all 16 of the most active currencies on the day of the announcement. It was the largest plunge of the franc ever against the euro.[20] The SNB had previously set an exchange rate target in 1978 and maintained it,[clarification needed] although at the cost of high inflation.[21]

Coins of the Helvetic Republic

Coins of the Swiss Confederation

Both world wars only had a small effect on the Swiss coinage, with brass and zinc coins temporarily being issued. In 1931, the size of the 5 franc coin was reduced from 25 grams to 15, with the silver content reduced to .835 fineness. The next year, nickel replaced cupro-nickel in the 5 and 10 rappen.[24]

In the late 1960s, due to their linkage to the devaluing U.S. dollar, the prices of internationally traded commodities rose significantly. A silver coin's material value exceeded its monetary value, and many were being sent abroad for melting, which prompted the federal government to make this practice illegal.[25] The statute was of little effect, and the melting of francs only subsided when the collectible value of the remaining francs again exceeded their material value.[citation needed]

The 1 rappen coin was still produced until 2006, albeit in ever decreasing quantities, but it did not play any great role in the monetary economy in the fourth quarter of the twentieth century (circa 1975 to 2000). People and groups who could justify the use of 1 rappen coins for monetary purposes could obtain them at face value; any other user (such as collectors) had to pay an additional 4 rappen per coin to cover the production costs, which had exceeded the actual face value of the coin for many years. The coin fell into disuse in the late 1970s and early 1980s but was only officially fully withdrawn from circulation and declared to be no longer legal tender as of 1 January 2007. The long-forgotten 2 rappen coin, not minted since 1974, was demonetized 1 January 1978.[24]

The designs of the coins have changed very little since 1879. Among the notable changes were new designs for the 5 franc coins in 1888, 1922, 1924 (minor) and 1931 (mostly just a size reduction). A new design for the bronze coins was used from 1948. Coins depicting a ring of stars (such as the 1 franc coin seen beside this paragraph) were modified from 22 stars to 23 stars in 1983; since the stars represent the Swiss cantons, it was updated to represent the 1979 expansion of the Swiss federation, when Jura seceded from the Canton of Bern and became the 23rd canton.[24]

All Swiss coins are language-neutral (at least with respect to Switzerland's four national languages), featuring only numerals, the abbreviation "Fr." for franc, and the Latin phrases "Helvetia", "Confœderatio Helvetica" (depending on the denomination) or the inscription "Libertas" (roman goddess of liberty) on the small coins. The name of the artist is present on the coins with the standing Helvetia and the herder.[26]

In addition to these general circulation coins, numerous series of commemorative coins have been issued, as well as silver and gold coins. These coins are no more legal tender, but can be exchanged for face value at post offices, and at national and cantonal banks.[27] Their material or collector's value equals or exceeds their face value.

Eight series of banknotes have been printed by the National Bank, six of which have been released for use by the general public. The sixth series from 1976, designed by Ernst and Ursula Hiestand, depicted persons from the world of science. It has been recalled and replaced and will lose any value on 1 May 2020. As of 2010, a large number of notes from this series have not yet been exchanged, even though they have not been legal tender for more than 10 years; for example, the value of those 500 franc banknotes still in circulation represents 129.9 million Swiss francs.[29] 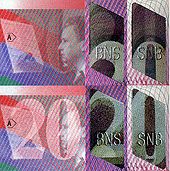 Some security features (Iriodin digits and Kinegram) of the 20 Swiss francs banknote.

The seventh series was printed in 1984, but kept as a "reserve series", ready to be used if, for example, wide counterfeiting of the current series suddenly happened. When the Swiss National Bank decided to develop new security features and to abandon the concept of a reserve series, the details of the seventh series were released and the printed notes were destroyed.[30]

The current, eighth series of banknotes was designed by Jörg Zintzmeyer around the theme of the arts and released starting in 1995. In addition to a new design, this series was different from the previous one on several counts. Probably the most important difference from a practical point of view was that the seldom-used 500 franc note was replaced by a new 200 franc note; this new note has indeed proved more successful than the old 500 franc note.[31] The base colours of the new notes were kept similar to the old ones, except that the 20 franc note was changed from blue to red to prevent a frequent confusion with the 100 franc note, and that the 10 franc note was changed from red to yellow. The size of the notes was changed as well, with all notes from the 8th series having the same height (74 mm), while the widths were changed as well, still increasing with the value of the notes. The new series contains many more security features than the previous one;[32] many (but not all) of them are now visibly displayed and have been widely advertised, in contrast with the previous series for which most of the features were kept secret.

When the 5th series lost its validity at the end of April 2000, the banknotes that had not been exchanged represented a total value of 244.3 million Swiss francs; in accordance with Swiss law, this amount was transferred to the Swiss Fund for Emergency Losses in the case of non-insurable natural disasters.[34]

In February 2005, a competition was announced for the design of the 9th series, planned to be released around 2010 on the theme Switzerland open to the world. The results were announced in November 2005, but the selected design drew widespread criticisms from the population.[35]

The Swiss Franc is used as a reserve currency around the world and is currently ranked rarely 5th or 6th in value held as reserves after the US Dollar, the euro, the Japanese Yen and the pound sterling.