The Mechanism for Cooperation and Verification (CVM) is safeguard measure invoked by the European Commission in case some new member or acceding state of the European Union has failed to implement commitments undertaken in the context of the accession negotiations in the fields of the Area of freedom, security and justice or internal market policy.

The accession treaties include provisions such as:

If [the acceding state] has failed to implement commitments undertaken in the context of the accession negotiations, causing a serious breach of the functioning of the internal market, ..., the Commission may, until the end of a period of up to three years after accession, ..., take appropriate measures. ... The safeguard clause may be invoked even before accession ... The measures ... shall be lifted when the relevant commitment is implemented. They may however be applied beyond the period [of three years after accession] as long as the relevant commitments have not been fulfilled.

— Act of Accession of Bulgaria and Romania, Article 37[1]

If there are serious shortcomings ... in [the acceding state] in the transposition [of Acquis communautaire] relating to mutual recognition in the area of criminal law ...and ... civil matters ..., the Commission may, until the end of a period of up to three years after accession, ..., take appropriate measures. ... These measures may take the form of temporary suspension of the application of relevant provisions ... in the relations between the acceding state and any other Member State ... The safeguard clause may be invoked even before accession ... The measures ... shall be lifted when the shortcomings are remedied. They may however be applied beyond the period [of three years after accession] as long as these shortcomings persist.

— Act of Accession of Bulgaria and Romania, Article 38[1]

The internal market safeguard clause has not been invoked so far. The safeguard clause for criminal law and civil matters was invoked for the first time[citation needed] in regards to the countries of the 2007 enlargement.

On 13 December 2006 the Commission established the following mechanisms for cooperation and verification of progress:

These measures entered into force as of the first day of accession, 1.1.2007.

The Commission assessed that "When they joined the EU on 1 January 2007, Romania and Bulgaria still had progress to make in the fields of judicial reform, corruption and organised crime. To smooth the entry of both countries and at the same time safeguard the workings of its policies and institutions, the EU decided to establish a special "cooperation and verification mechanism" to help them address these outstanding shortcomings."

So far, no suspensions are enforced[citation needed], but the possibility for those is stated in paragraph 7 of the decisions for CVM establishment from 2006.

Common practice in the EU is that during accession negotiations there are agreed some temporary transitional periods after accession of new states for derogation of application for specific parts of the acquis communautaire, because of difficulties either for the new member state (for example environmental regulations for large combustion plants) or for the old member states (for example free movement of workers).[4] Such temporary transitional periods in regards to particular member states are also implemented when various new pieces of EU legislation are adopted (or in a new treaty adoption or ammendmend)[citation needed].

In contrast to the temporary derogations, that are automatically discontinued after the end of the transitional period, the Mechanism for Cooperation and Verification is permanent and its discontinuation is conditional only on the positive assessment of benchmarks fulfillment in the regular reports issued by the Commission. This is similar to the permanent derogations on Eurozone and Schengen Area for new member states (formulated in accession treaties), whose discontinuation is also conditional the on fulfillment of benchmarks (like the convergence criteria) and similarly assessed in regular progress reports. According to the treaties the new member states are obliged to fulfill the benchmarks for discontinuation of both these permanent derogations and the CVMs, but some of them deliberately delay these processes.[5] The CVM is thus different from the Enhanced co-operation mechanism[6], where generally all EU members are free to opt-in at any time into an already established Enhanced co-operation initiative, without preconditions. 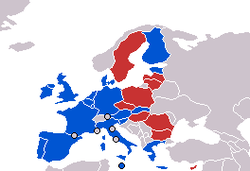 More than three years has passed since the last enlargement so as of 2011 no new safeguards can be invoked.

Croatia is expected to be the next state to accede to the European Union in 2012 or 2013, but so far there are no indications that a safeguard clause would be invoked for it.[7]