Charter of Fundamental Rights of the European Union

Under the Charter, the European Union (EU) must act and legislate consistently with the Charter and the EU's courts will strike down EU legislation which contravenes it. The Charter only applies to EU member states when they are implementing EU law and does not extend the competences of the EU beyond the competences given to it in the treaties.

The Treaty establishing the European Economic Community did not include any reference to fundamental or human rights. The EEC Treaty was written a few years after the failure of the European Defence Community Treaty and the European Political Community Treaty. This latter treaty had included rights provisions and Craig and de Búrca argue that, in light of that failure, the drafters of the EEC Treaty wished to eschew any implicitly political elements.[2] However the idea that the purely economic end of the new EEC Treaty would be unlikely to have any implications for fundamental rights was soon to be tested.

Soon after the entry into force of the EEC Treaty, the Community established itself as a major political entity with policy ramifications beyond its economic aims. In 1964, the European Court of Justice handed down its decision in Costa v ENEL, in which the Court decided that Community law should take precedence over conflicting national law. This meant that national government could not escape what they had agreed to at a European level by enacting conflicting domestic measures, but it also potentially meant that the EEC legislator could legislate unhindered by the restrictions imposed by fundamental rights provisions enshrined in the constitutions of member states. This issue came to a head in 1970 in the case of Handelsgesellschaft case when a German court ruled that a piece of EEC legislation infringed the German Basic Law. On a reference from the German court, the ECJ ruled that whilst the application of Community law could not depend on its consistency with national constitutions, fundamental rights did form an "integral part of the general principles of [European Community] law" and that inconsistency with fundamental right could form the basis of a successful challenge to a European law.[3]

In ruling as it did in Handelsgesellschaft the ECJ had, in effect, created a doctrine of unwritten rights which bound the Community institutions. While the court's fundamental rights jurisprudence was approved by the institutions in 1977[4] and a statement to that effect was inserted into the treaties by the Maastricht Treaty,[5] it was only in 1999 that the European Council formally went about the process of initiating the drafting a codified catalogue of fundamental rights for the EU.

In 1999 the European Council proposed that a "body composed of representatives of the Heads of State and Government and of the President of the Commission as well as of members of the European Parliament and national parliaments" would be set up to draft a fundamental rights charter.[6] On being constituted in December of that year the "body" entitled itself the European Convention.[7]

The Convention adopted the draft on 2 October 2000 and it was solemnly proclaimed by the European Parliament, the Council of Ministers and the European Commission on 7 December 2000. It was at the same time, however, decided to defer making a decision on the Charter's legal status.[8] However it did come with the political weight of having been approved by three powerful institutions and as such was regularly cited by the ECJ as a source of fundamental rights.

A modified Charter formed part of the defunct European Constitution. After that treaty's failure, its replacement, the Lisbon Treaty, also gave force to the Charter albeit by referencing it an independent document rather than by incorporating it into the treaty itself. It should be noted, however, that both the version included in the Constitution and the one referenced by the Lisbon Treaty were amended versions.

On its coming into force with the Lisbon Treaty on 1 December 2009, Justice Commissioner Viviane Reding proposed that Commissioners should swear to uphold all EU treaties and the Charter. On 3 May 2010, the European Commission swore a solemn declaration at the European Court of Justice in Luxembourg, pledging to respect the EU Treaties and to be completely independent in carrying out their duties during their mandate. For the first time, the Commissioners also explicitly pledged to respect the new Charter of Fundamental Rights.[9]

Several states insisted upon an opt-out from national application of the charter (see below for details). 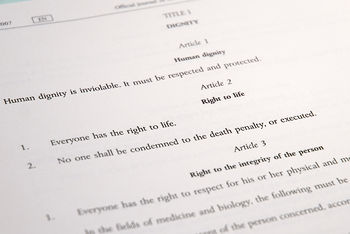 Following the entry into force of the Lisbon Treaty in 2009 the fundamental rights' charter has the same legal value as the European Union treaties. The Charter referred to in the Treaty is an amended version of the 2000 document which was solemnly declared by the same three institutions a day before the signing of the Lisbon Treaty itself.

Article 51(1) of the Charter addresses the Charter to the EU's institutions, bodies established under EU law and, when implementing EU laws, the EU's member states. In addition both Article 6 of the amended Treaty of European Union and Article 51(2) of the Charter itself restrict the Charter from extending the competences of the EU. A consequence of this is that the EU will not be able to legislate to vindicate a right set out in the Charter unless the power to do such is set out in the Treaties proper. And individuals will not be able to take member states to court because they have failed to uphold the rights in the Charter unless the member state in question was implementing EU law. It is this last element of these that has been subject to the most debate.

The Charter is not the first outing for human jurisprudence in the EU. In interpreting the general principles of EU law described above, the European Court of Justice has already dealt the issue of whether those general principles applied to member states. Having ruled in Johnston v Royal Ulster Constabulary[10] that a right to fair procedures was one of the general principles of EU law, in Kremzow v Austria[11] the ECJ had to decide whether or not a member state were obliged to apply that principle in relation to a wrongful conviction for murder. Kremzow's lawyers argued that his case came within the scope of EU law on the grounds that his wrongful conviction and sentence had breached his right to free movement within the EU. The ECJ responded by saying that since the laws under which Kremzow had been convicted were not enacted to secure compliance with EU law, his predicament fell outside the scope of EU law.

The British, Czech and Polish protocol

In the negotiations leading up to the signing to the Lisbon Treaty, Poland and the United Kingdom secured a protocol to the treaty relating to the application of the Charter of the Fundamental Rights in their respective countries. In October 2009 EU leaders agreed to amend the protocol at the time of the next accession treaty to include the Czech Republic.[13]

The protocol contains two substantial provisions. The first—Article 1(1)—precludes both the domestic courts in Poland and the UK and the EU's courts from finding that "laws, regulations or administrative provisions, practices or action" in the countries to which it applies are inconsistent with the Charter. The second—Article 1(2)—says that the Title IV of the Charter, which contains economic and social rights, does not create justiciable rights.

All three countries to which the protocol applies or will apply, had different reasons for negotiating the protocol. The United Kingdom originally opposed a legally binding charter over concerns that it would result in a stream of British citizens going to the European Court of Justice in attempts to enforce their Charter rights in the UK,[14] and in increased costs for business.[15] While the British accepted a legally binding rights charter during the negotiations of the failed European Constitution, they negotiated a protocol during the Lisbon negotiations which, according to the then British Minister for Europe, would ensure that the Charter would not extend the powers of the European Court of Justice over United Kingdom law.[16]

Although their problems with the Charter related to its perceived liberal stance on social issues, in September 2007 the Polish government indicated that they wished to be included in the British protocol.[17] In late 2009 EU leaders promised to amend the protocol so that it would apply to the Czech Republic[13] in a measure designed to persuade the Czech President Vaclav Klaus to sign the Lisbon Treaty.[18] Klaus had previously voiced concerns that the Charter would allow the families of Germans who were expelled from territory within the modern day Czech Republic after the Second World War to challenge that expulsion before the EU's courts, and he requested an opt-out be added to the Lisbon Treaty to resolve the issue.[19] The Czech President subsequently signed the treaty, although the protocol he requested has no connection with the one he was eventually offered. It might be noted in passing that there was never any prospect of the validity of the laws under which the German were expelled, the Beneš decrees, being questioned.[20]

The Charter contains some 54 articles divided into seven titles. The first six titles deal with substantive rights under the headings: dignity, freedoms, equality, solidarity, citizens' rights and justice, while the last title deals with the interpretation and application of the Charter. Much of Charter is based on the European Convention on Human Rights (ECHR), the case-law of the European Court of Justice and pre-existing provisions of European Union law. 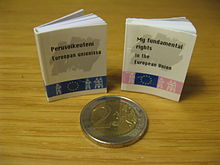 Minibooks containing the text of the Charter.

The EU has attempted to raise the profile of the charter so citizens are more aware of their rights, for example by publishing a mini version of the charter in all EU languages. The European Fundamental Rights Agency (FRA) had also put out a tender for poets to turn the Charter into an 80-minute long epic poem, with music, dance and multimedia elements. This was also to raise awareness and to simplify the legal text into more understandable language.[23][24] However Viviane Reding, the European Commissioner for Justice, Freedom & Security, wrote to the director of the FRA slamming the idea on cost and dignity grounds and instructing him to cancel the project.[25]