The goddess Persephone, from the great Eleusinian relief in the National Archaeological Museum in Athens 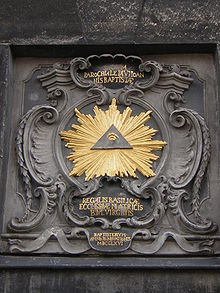 An all-seeing Eye of Providence that appears on the tower of Aachen Cathedral.

The Appearance of the Holy Spirit before Saint Teresa of Ávila, Peter Paul Rubens 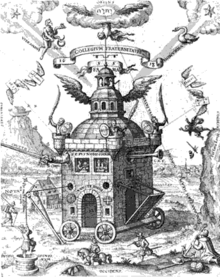 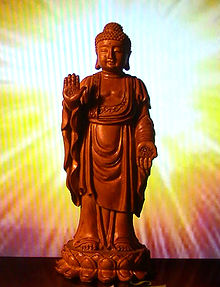 pronunciation (help·info); from the Greek μυστικός, mystikos, meaning 'an initiate') is the knowledge of, and especially the personal experience of, states of consciousness, i.e. levels of being, beyond normal human perception, including experience and even communion with a supreme being.

A "mystikos" was an initiate of a mystery religion. The Eleusinian Mysteries, (Greek: Ἐλευσίνια Μυστήρια) were annual initiation ceremonies in the cults of the goddesses Demeter and Persephone, held in secret at Eleusis (near Athens) in ancient Greece.[1] The mysteries began in about 1600 B.C. in the Mycenean period and continued for two thousand years, becoming a major festival during the Hellenic era, and later spreading to Rome.[2]

The present meaning of the term mysticism arose via Platonism and Neoplatonism—which referred to the Eleusinian initiation as a metaphor for the "initiation" to spiritual truths and experiences—and is the pursuit of communion with, identity with, or conscious awareness of an ultimate reality, divinity, spiritual truth, or God through direct experience, intuition, instinct or insight. Mysticism usually centers on practices intended to nurture those experiences. Mysticism may be dualistic, maintaining a distinction between the self and the divine, or may be nondualistic. [3]

Many if not all of the world's great religions have arisen around the teachings of mystics (including Buddha, Jesus, Lao Tze, and Krishna); and most religious traditions describe fundamental mystical experience, at least esoterically. Enlightenment or Illumination are generic English terms for the phenomenon, derived from the Latin illuminatio (applied to Christian prayer in the 15th century) and adopted in English translations of Buddhist texts, but used loosely to describe the state of mystical attainment regardless of faith. [4]

Conventional religions, by definition, have strong institutional structures, including formal hierarchies and mandated sacred texts and/or creeds. Adherents of the faith are expected to respect or follow these closely, so mysticism is often deprecated or persecuted.[5]

The following table briefly summarizes the major forms of mysticism within world religions and their basic concepts.

Since, by definition, mystical knowledge cannot be directly written down or spoken of (but must be experienced), numerous literary forms that allude to such knowledge - often with contradictions or even jokes - have developed, for example:

Aphorisms and poetry include artistic efforts to crystallize some particular description or aspect of the mystical experience in words:

Zen koans, riddles, and metaphysical contradictions are intentionally irresolvable tasks or lines of thought, designed to direct one away from intellectualism and effort towards direct experience. [21]

These can be meant as humorous phrases (see humour, below); or as serious questions with significant mystical answers. Others believe that the most edifying understanding of these riddles is that excessive effort contemplating the impossible can give an individual the opportunity to stop trying to 'achieve' and start just 'being'.

Jokes and humorous stories can be used in spiritual teaching to make simple yet profound metaphysical points:

Parables and metaphor include stories that have a deeper meaning to them:

Some Passages seem to be aphorisms, riddles and parables all at once. For instance, Yunus Emre's famous passage:

I climbed into the plum tree
and ate the grapes I found there.
The owner of the garden called to me,
"Why are you eating my walnuts?"

The centuries-old idea of a perennial philosophy, popularized by Aldous Huxley in his 1945 book: The Perennial Philosophy, states one view of what mysticism is all about:

[W]ith the one, divine reality substantial to the manifold world of things and lives and minds. But the nature of this one reality is such that it cannot be directly or immediately apprehended except by those who have chosen to fulfill certain conditions, making themselves loving, pure in heart, and poor in spirit.[26]

According to Schopenhauer,[27] mystics arrive at a condition in which there is no knowing subject and known object:

... we see all religions at their highest point end in mysticism and mysteries, that is to say, in darkness and veiled obscurity. These really indicate merely a blank spot for knowledge, the point where all knowledge necessarily ceases. Hence for thought this can be expressed only by negations, but for sense-perception it is indicated by symbolical signs, in temples by dim light and silence, in Brahmanism even by the required suspension of all thought and perception for the purpose of entering into the deepest communion with one's own self, by mentally uttering the mysterious Om. In the widest sense, mysticism is every guidance to the immediate awareness of what is not reached by either perception or conception, or generally by any knowledge. The mystic is opposed to the philosopher by the fact that he begins from within, whereas the philosopher begins from without. The mystic starts from his inner, positive, individual experience, in which he finds himself as the eternal and only being, and so on. But nothing of this is communicable except the assertions that we have to accept on his word; consequently he is unable to convince.

— Schopenhauer, The World as Will and Representation, Vol. II, Ch. XLVIII