Platonism is the philosophy of Plato or the name of other philosophical systems considered closely derived from it. In a narrower sense the term might indicate the doctrine of Platonic realism. The central concept of Platonism is the distinction between that reality which is perceptible, but not intelligible, and that which is intelligible, but imperceptible; to this distinction the Theory of Forms is essential. The forms are typically described in dialogues such as the Phaedo, Symposium and Republic as transcendent, perfect archetypes, of which objects in the everyday world are imperfect copies. In the Republic the highest form is identified as the Form of the Good, the source of all other forms, which could be known by reason. In the Sophist, a later work, the forms being, sameness and difference are listed among the primordial "Great Kinds". In the 3rd century BC, Arcesilaus adopted skepticism, which became a central tenet of the school until 90 BC when Antiochus added Stoic elements, rejected skepticism, and began a period known as Middle Platonism. In the 3rd century AD, Plotinus added mystical elements, establishing Neoplatonism, in which the summit of existence was the One or the Good, the source of all things; in virtue and meditation the soul had the power to elevate itself to attain union with the One. Platonism had a profound effect on Western thought, and many Platonic notions were adopted by the Christian church which understood Platonic forms as God's thoughts, whilst Neoplatonism became a major influence on Christian mysticism.

The primary concept is the Theory of Forms. The only true being is founded upon the forms, the eternal, unchangeable, perfect types, of which particular objects of sense are imperfect copies. The multitude of objects of sense, being involved in perpetual change, are thereby deprived of all genuine existence.[1] The number of the forms is defined by the number of universal concepts which can be derived from the particular objects of sense.[1] The following excerpt may be representative of Plato's middle period metaphysics and epistemology:

[Socrates:]"Since the beautiful is opposite of the ugly, they are two."
[Glaucon:]"Of course."
"And since they are two, each is one?"
"I grant that also."
"And the same account is true of the just and unjust, the good and the bad, and all the forms. Each of them is itself one, but because they manifest themselves everywhere in association with actions, bodies, and one another, each of them appears to be many."
"That's right."
"So, I draw this distinction: On one side are those you just now called lovers of sights, lovers of crafts, and practical people; on the other side are those we are now arguing about and whom one would alone call philosophers."
"How do you mean?"
"The lovers of sights and sounds like beautiful sounds, colors, shapes, and everything fashioned out of them, but their thought is unable to see and embrace the nature of the beautiful itself."
"That's for sure."
"In fact, there are very few people who would be able to reach the beautiful itself and see it by itself. Isn't that so?"
"Certainly."
"What about someone who believes in beautiful things, but doesn't believe in the beautiful itself and isn't able to follow anyone who could lead him to the knowledge of it? Don't you think he is living in a dream rather than a wakened state? Isn't this dreaming: whether asleep or awake, to think that a likeness is not a likeness but rather the thing itself that it is like?"
"I certainly think that someone who does that is dreaming."
"But someone who, to take the opposite case, believes in the beautiful itself, can see both it and the things that participate in it and doesn't believe that the participants are it or that it itself is the participants--is he living in a dream or is he awake?
"He's very much awake."
(Republic Bk. V, 475e-476d, translation G.M.A Grube)

Book VI of the Republic identifies the highest form as the Form of the Good, the cause of all other Ideas, and that on which the being and knowing of all other Forms is contingent. Conceptions derived from the impressions of sense can never give us the knowledge of true being; i.e. of the forms.[1] It can only be obtained by the soul's activity within itself, apart from the troubles and disturbances of sense; that is to say, by the exercise of reason.[1] Dialectic, as the instrument in this process, leading us to knowledge of the forms, and finally to the highest form of the Good, is the first of sciences.[1] Later Neoplatonism, beginning with Plotinus, identified the Good of the Republic with the so-called transcendent, absolute One of the first hypothesis of the Parmenides (137c-142a).

Platonist ethics is based on the Form of the Good. Virtue is knowledge, the recognition of the supreme form of the Good.[1] And, since in this cognition, the three parts of the soul, which are reason, spirit, and appetite, all have their share, we get the three virtues, Wisdom, Courage, and Moderation.[1] The bond which unites the other virtues is the virtue of Justice, by which each part of the soul is confined to the performance of its proper function.[1]

Platonism had a profound effect on Western thought. In many interpretations of the Timaeus Platonism,[2] like Aristotelianism, poses an eternal universe, as opposed to the nearby Judaic tradition that the universe had been created in historical time, with its continuous history recorded. Unlike Aristotelianism, Platonism describes idea as prior to matter and identifies the person with the soul. Many Platonic notions secured a permanent place in Christianity.[3] 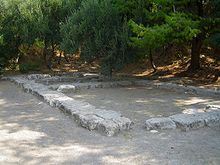 Site of Plato's Academy in Athens

Platonism was originally expressed in the dialogues of Plato, in which the figure of Socrates is used to expound certain doctrines, that may or may not be similar to the thought of the historical Socrates, Plato's master. Plato delivered his lectures at the Academy, a precinct containing a sacred grove outside the walls of Athens. The school continued there long after. There were three periods: the Old, Middle, and New Academy. The chief figures in the Old Academy were Speusippus (Plato's nephew), who succeeded him as the head of the school (until 339 BC), and Xenocrates (till 313 BC). Both of them sought to fuse Pythagorean speculations on number with Plato's theory of forms.

Around 266 BC, Arcesilaus became head of the Academy. This phase, known as the Middle Academy, strongly emphasized Academic skepticism. It was characterized by its attacks on the Stoics and their assertion of the certainty of truth and our knowledge of it. The New Academy began with Carneades in 155 BC, the fourth head in succession from Arcesilaus. It was still largely skeptical, denying the possibility of knowing an absolute truth; both Arcesilaus and Carneades believed that they were maintaining a genuine tenet of Plato.

Around 90 BC, Antiochus of Ascalon rejected skepticism, making way for the period known as Middle Platonism, in which Platonism was fused with certain Peripatetic and many Stoic dogmas. In Middle Platonism, the Platonic Forms were not transcendent but immanent to rational minds, and the physical world was a living, ensouled being, the World-Soul. Pre-eminence in this period belongs to Plutarch. The eclectic nature of Platonism during this time is shown by its incorporation into Pythagoreanism (Numenius of Apamea) and into Jewish philosophy (Philo of Alexandria).

In the third century, Plotinus recast Plato's system, establishing Neoplatonism, in which Middle Platonism was fused with oriental mysticism. At the summit of existence stands the One or the Good, as the source of all things.[4] It generates from itself, as if from the reflection of its own being, reason, the nous, - wherein is contained the infinite store of ideas.[4] The world-soul, the copy of the nous, is generated by and contained in it, as the nous is in the One, and, by informing matter in itself nonexistent, constitutes bodies whose existence is contained in the world-soul.[4] Nature therefore is a whole, endowed with life and soul. Soul, being chained to matter, longs to escape from the bondage of the body and return to its original source.[4] In virtue and philosophical thought it has the power to elevate itself above the reason into a state of ecstasy, where it can behold, or ascend up to, that one good primary Being whom reason cannot know.[4] To attain this union with the Good, or God, is the true function of human beings.[4]

Plotinus' disciple, Porphyry, followed by Iamblichus, developed the system in conscious opposition to Christianity. The Platonic Academy was re-established during this time period; its most renowned head was Proclus (died 485), a celebrated commentator on Plato's writings. The Academy persisted until Roman emperor Justinian closed it in 529. 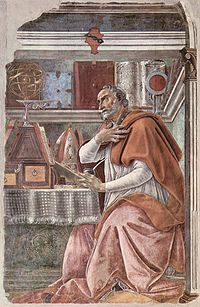 Many Western churchmen, including Augustine of Hippo, have been influenced by Platonism
Main article: Neoplatonism and Christianity

Platonism influenced Christianity through Clement of Alexandria and Origen,[3] and the Cappadocian Fathers.[5] St. Augustine was heavily influenced by Platonism as well, which he encountered through the Latin translations of Marius Victorinus of the works of Porphyry and/or Plotinus.[3]

With the Renaissance, scholars became more interested in Plato himself.[3] In 16th, 17th century, and 19th century England, Plato's ideas influenced many religious thinkers.[3] Orthodox Protestantism in continental Europe, however, distrusts natural reason and has often been critical of Platonism.[3]

Apart from historical Platonism originating from thinkers such as Plato himself, Numenius, Plotinus, Augustine and Proclus, we may wish to consider the theory of abstract objects in the modern sense.

Platonism is the view that there exist such things as abstract objects — where an abstract object is an object that does not exist in space or time and which is therefore entirely non-physical and non-mental. Platonism in this sense is a contemporary view.[7]

This modern platonism (conventionally written with a small "p" to distinguish it from the ancient schools) has been endorsed in one way or another at one time or another by numerous philosophers (most of whom taking a particular interest in the philosophy and foundations of logic and mathematics), including Bernard Bolzano, Gottlob Frege, Edmund Husserl, Bertrand Russell, Alonzo Church, Kurt Gödel, W.V. Quine, Hilary Putnam, George Bealer and Edward Zalta. Modern platonism recognizes a range of objects, including numbers, sets, truth values, properties, types, propositions and meanings.