Blessed John (Johannes) Duns Scotus, O.F.M. (c. 1265 – November 8, 1308) was one of the more important theologians and philosophers of the High Middle Ages. He was nicknamed Doctor Subtilis for his penetrating and subtle manner of thought.

Scotus has had considerable influence on Roman Catholic thought. The doctrines for which he is best known are the "univocity of being," that existence is the most abstract concept we have, applicable to everything that exists; the formal distinction, a way of distinguishing between different aspects of the same thing; and the idea of haecceity, the property supposed to be in each individual thing that makes it an individual. Scotus also developed a complex argument for the existence of God, and argued for the Immaculate conception of Mary.

Little is known of Scotus' life. He was probably born in 1265,[1] possibly at Duns, in Berwickshire, Scotland, but also possibly in Ireland or in northern England.[2] In 1291 he was ordained as a priest in Northampton, England. A note in Codex 66 of Merton College, Oxford, records that Scotus "flourished at Cambridge, Oxford and Paris.[3] He began lecturing on Peter Lombard's Sentences at the prestigious University of Paris in the Autumn of 1302. Later in that academic year, however, he was expelled from the University of Paris for siding with then Pope Boniface VIII in his feud with Philip the Fair of France, over the taxation of church property.

Scotus was back in Paris before the end of 1304, probably returning in May. He continued lecturing there until, for reasons which are still mysterious, he was dispatched to the Franciscan studium at Cologne, probably in October 1307. He died there in 1308; the date of his death is traditionally given as 8 November.

He is buried in the Church of the Franciscans in Cologne. His sarcophagus bears the Latin inscription: Scotia me genuit. Anglia me suscepit. Gallia me docuit. Colonia me tenet. (trans. "Scotland brought me forth. England sustained me. France taught me. Cologne holds me.") He was beatified by Pope John Paul II on March 20, 1993. According to an old tradition, Scotus was buried alive following his lapse into a coma.[citation needed] 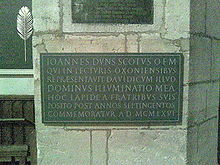 Scotus is considered one of the most important Franciscan theologians and was the founder of Scotism, a special form of Scholasticism. He came out of the Old Franciscan School, to which Haymo of Faversham (d. 1244), Alexander of Hales (d. 1245), John of Rupella (d. 1245), William of Melitona (d. 1260), St. Bonaventure (d. 1274), Cardinal Matthew of Aquasparta (d. 1289), John Peckham, Archbishop of Canterbury (d. 1292), Richard of Middletown (d. about 1300), etc., belonged. He was known as "Doctor Subtilis" because of the subtle distinctions and nuances of his thinking. Later philosophers in the sixteenth century were less complimentary about his work, and accused him of sophistry. This led to his name, "dunce" (which developed from the name "Dunse" given to his followers in the 1500s) to become synonymous for "somebody who is incapable of scholarship".

Scotus is generally considered to be a realist (as opposed to a nominalist) in that he treated universals as real. He attacks a position close to that later defended by Ockham, arguing that things have a common nature – for example the humanity common to both Socrates and Plato.

He followed Aristotle in asserting that the subject matter of metaphysics is "being qua being" (ens inquantum ens). Being in general (ens in communi), as a univocal notion, was for him the first object of the intellect. Metaphysics includes the study of the transcendentals, so called because they transcend the division of being into finite and infinite and the further division of finite being into the ten Aristotelian categories. Being itself is a transcendental, and so are the "attributes" of being — "one," "true," and "good" — which are coextensive with being, but which each add something to it.

The doctrine of the univocity of being implies the denial of any real distinction between essence and existence. Aquinas had argued that in all finite being (i.e. all except God), the essence of a thing is distinct from its existence. Scotus rejected the distinction. We can conceive of what it is to be something, without conceiving it as existing. Scotus denied this. We should not make any distinction between whether a thing exists (si est) and what it is (quid est), for we never know whether something exists, unless we have some concept of what we know to exist.[4]

The study of the Aristotelian categories belongs to metaphysics insofar as the categories, or the things falling under them, are studied as beings. (If they are studied as concepts, they belong instead to the logician.) There are exactly ten categories, according to orthodox Aristotelianism. The first and most important is the category of substance. Substances are beings in a primary sense, since they have an independent existence (entia per se). Beings in any of the other nine categories, called accidents, exist in substances. The nine categories of accidents are quantity, quality, relation, action, passion, place, time, position, and state (or habitus).

Duns elaborates a distinct view on hylomorphism, with three important strong theses that differentiate him. He held: 1) that there exists matter that has no form whatsoever, or prime matter, as the stuff underlying all change, against Aquinas (cf. his Quaestiones in Metaphysicam 7, q. 5; Lectura 2, d. 12, q. un.), 2) that not all created substances are composites of form and matter (cf. Lectura 2, d. 12, q. un., n. 55), that is, that purely spiritual substances do exist, and 3) that one and the same substance can have more than one substantial form — for instance, humans have at least two substantial forms, the soul and the form of the body (forma corporeitas) (cf. Ordinatio 4, d. 11, q. 3, n. 54). He argued for an original principle of individuation (cf. Ordinatio 2, d. 3, pars 1, qq. 1-6), the "haecceity" as the ultimate unity of a unique individual (haecceitas, an entity's 'thisness'), as opposed to the common nature (natura communis), feature existing in any number of individuals. For Scotus, the axiom stating that only the individual exists is a dominating principle of the understanding of reality. For the apprehension of individuals, an intuitive cognition is required, which gives us the present existence or the non-existence of an individual, as opposed to abstract cognition. Thus the human soul, in its separated state from the body, will be capable of knowing the spiritual intuitively.

Like other realist philosophers of the period (such as Aquinas and Henry of Ghent) Scotus recognised the need for an intermediate distinction that was not merely conceptual, but not fully real or mind-dependent either. Scotus argued for an formal distinction (distinctio formalis a parte rei), which holds between entities which are inseparable and indistinct in reality, but whose definitions are not identical. For example, the personal properties of the Trinity are formally distinct from the Divine essence. Similarly, the distinction between the 'thisness' or haecceity of a thing is intermediate between a real and a conceptual distinction.[5] There is also a formal distinction between the divine attributes and the powers of the soul.

Scotus was an Augustinian theologian. He is usually associated with voluntarism, the tendency to emphasize God's will and human freedom in all philosophical issues. The main difference between Aquinas' rational theology and that of Scotus' is that Scotus believes certain predicates may be applied univocally — with exactly the same meaning — to God and creatures, whereas Aquinas insisted that this is impossible, and that only analogical predication can be employed, in which a word as applied to God has a meaning different from, although related to, the meaning of that same word as applied to creatures. Duns struggled throughout his works in demonstrating his univocity theory against Aquinas' analogy doctrine.

The existence of God can be proven only a posteriori, through its effects. The Causal Argument he gives for the existence of God says that an infinity of things that are essentially ordered is impossible, as the totality of caused things that are essentially caused is itself caused, and so it is caused by some cause which is not a part of the totality, for then it would be the cause of itself; for the whole totality of dependent things is cause, and not on anything belonging to that totality. The argument is relevant for Scotus' conception of metaphysical inquiry into being by searching the ways into which beings relate to each other.

When one of those that come together is incompatible with certainty, then certainty cannot be achieved. For just as from one premise that is necessary and one that is contingent nothing follows but a contingent conclusion, so from something certain and something uncertain, coming together in some cognition, no cognition that is certain follows (Ordinatio I.3.1.4 n.221).

Perhaps the most influential point of Duns Scotus' theology was his defense of the Immaculate Conception of Mary. At the time, there was a great deal of argument about the subject. The general opinion was that it was appropriate, but it could not be seen how to resolve the problem that only with Christ's death would the stain of original sin be removed. The great philosophers and theologians of the West were divided on the subject (indeed, it appears that even Thomas Aquinas sided with those who denied the doctrine, though some Thomists dispute this). The feast day had existed in the East since the seventh century and had been introduced in several dioceses in the West as well, even though the philosophical basis was lacking. Citing Anselm of Canterbury's principle, "potuit, decuit, ergo fecit" (God could do it, it was appropriate, therefore he did it), Duns Scotus devised the following argument: Mary was in need of redemption like all other human beings, but through the merits of Jesus' crucifixion, given in advance, she was conceived without the stain of original sin. God could have brought it about (1) that she was never in original sin, (2) she was in sin only for an instant, (3) she was in sin for a period of time, being purged at the last instant. Whatever of these was more excellent should probably be attributed to Mary.[7] This apparently careful statement provoked a storm of opposition at Paris, and suggested the line 'fired France for Mary without spot' in the famous poem "Duns Scotus's Oxford," by Gerard Manley Hopkins.

This argument appears in Pope Pius IX's declaration of the dogma of the Immaculate Conception. Pope John XXIII recommended the reading of Duns Scotus' theology to modern theology students.

The authenticity of Scotus' logical works has been questioned. Some of the logical and metaphysical works originally attributed to him are now known to be by other authors. There were already concerns about this within two centuries of his death, when the sixteenth-century logician Jacobus Naveros noted inconsistencies between these texts and his commentary on the Sentences, leading him to doubt whether he had written any logical works at all.[8] The Questions on the Prior Analytics (In Librum Priorum Analyticorum Aristotelis Quaestiones) were also discovered to be mistakenly attributed.[9]

Modern editors have identified only four works as authentic: the commentaries on Porphyry's Isagoge, on Aristotle's Categories, On Interpretation (in two different versions), and on Sophistical Refutations, probably written in that order. These are called the parva logicalia. These are dated at around 1295, when Scotus would have been in his late twenties, working in Oxford.