Ontology
This article concerns ontology in philosophy. For the concept in information science, see Ontology (information science). Not to be confused with the medical concepts of oncology and odontology, or indeed ontogeny. 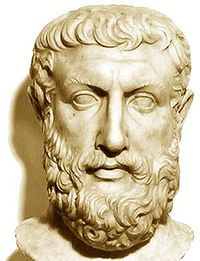 Parmenides was among the first to propose an ontological characterization of the fundamental nature of reality.

Ontology (from onto-, from the Greek ὤν, ὄντος "being; that which is", present participle of the verb εἰμί "be", and -λογία, -logia: science, study, theory) is the philosophical study of the nature of being, existence or reality as such, as well as the basic categories of being and their relations. Traditionally listed as a part of the major branch of philosophy known as metaphysics, ontology deals with questions concerning what entities exist or can be said to exist, and how such entities can be grouped, related within a hierarchy, and subdivided according to similarities and differences.

Ontology, in analytic philosophy, concerns the determining of whether some categories of being are fundamental and asks in what sense the items in those categories can be said to "be". It is the inquiry into being in so much as it is being, or into beings insofar as they exist—and not insofar as, for instance, particular facts obtained about them or particular properties related to them.

Some philosophers, notably of the Platonic school, contend that all nouns (including abstract nouns) refer to existent entities. Other philosophers contend that nouns do not always name entities, but that some provide a kind of shorthand for reference to a collection of either objects or events. In this latter view, mind, instead of referring to an entity, refers to a collection of mental events experienced by a person; society refers to a collection of persons with some shared characteristics, and geometry refers to a collection of a specific kind of intellectual activity.[1] Between these poles of realism and nominalism, there are also a variety of other positions; but any ontology must give an account of which words refer to entities, which do not, why, and what categories result. When one applies this process to nouns such as electrons, energy, contract, happiness, space, time, truth, causality, and God, ontology becomes fundamental to many branches of philosophy.

Principal questions of ontology are "What can be said to exist?", "Into what categories, if any, can we sort existing things?", "What are the meanings of being?", "What are the various modes of being of entities?". Various philosophers have provided different answers to these questions.

One common approach is to divide the extant subjects and predicates into groups called categories. Of course, such lists of categories differ widely from one another, and it is through the co-ordination of different categorical schemes that ontology relates to such fields as library science and artificial intelligence. Such an understanding of ontological categories, however, is merely taxonomic, classificatory. The categories are, properly speaking,[2] the ways in which a being can be addressed simply as a being, such as what it is (its 'whatness', quidditas or essence), how it is (its 'howness' or qualitativeness), how much it is (quantitativeness), where it is, its relatedness to other beings, etc.

Further examples of ontological questions include:

While the etymology is Greek, the oldest extant record of the word itself is the New Latin form ontologia, which appeared in 1606, in the work Ogdoas Scholastica by Jacob Lorhard (Lorhardus) and in 1613 in the Lexicon philosophicum by Rudolf Göckel (Goclenius); see classical compounds for this type of word formation.

The first occurrence in English of "ontology" as recorded by the OED (Oxford English Dictionary, second edition, 1989) appears in Nathaniel Bailey's dictionary of 1721, which defines ontology as ‘an Account of being in the Abstract’ - though, of course, such an entry indicates the term was already in use at the time. It is likely the word was first used in its Latin form by philosophers based on the Latin roots, which themselves are based on the Greek. The current on-line edition of the OED (Draft Revision September 2008) gives as first occurrence in English a work by Gideon Harvey (1636/7-1702): Archelogia philosophica nova; or, New principles of Philosophy. Containing Philosophy in general, Metaphysicks or Ontology, Dynamilogy or a Discourse of Power, Religio Philosophi or Natural Theology, Physicks or Natural philosophy - London, Thomson, 1663.

Parmenides was among the first to propose an ontological characterization of the fundamental nature of existence. In his prologue or proem he describes two views of existence; initially that nothing comes from nothing, and therefore existence is eternal. Consequently our opinions about truth must often be false and deceitful. Most of western philosophy, and science - including the fundamental concepts of falsifiability and the conservation of energy - have emerged from this view. This posits that existence is what can be conceived of by thought, created, or possessed. Hence, there can be neither void nor vacuum; and true reality can neither come into being nor vanish from existence. Rather, the entirety of creation is eternal, uniform, and immutable, though not infinite (he characterized its shape as that of a perfect sphere). Parmenides thus posits that change, as perceived in everyday experience, is illusory. Everything that can be apprehended is but one part of a single entity. This idea somewhat anticipates the modern concept of an ultimate grand unification theory that finally explains all of existence in terms of one inter-related sub-atomic reality which applies to everything.

The opposite of eleatic monism is the pluralistic conception of Being. In the 5th century BC, Anaxagoras and Leucippus replaced [3] the reality of Being (unique and unchanging) with that of Becoming and therefore by a more fundamental and elementary ontic plurality. This thesis originated in the Greek-ion world, stated in two different ways by Anaxagoras and by Leucippus. The first theory dealt with "seeds" (which Aristotle referred to as "homeomeries") of the various substances. The second was the atomistic theory,[4] which dealt with reality as based on the vacuum, the atoms and their intrinsic movement in it.

The materialist Atomism proposed by Leucippus was indeterminist, but then developed by Democritus in a deterministic way. It was later (4th century BC) that the original atomism was taken again as indeterministic by Epicurus. He confirmed the reality as composed of an infinity of indivisible, unchangeable corpuscles or atoms (atomon, lit. ‘uncuttable’), but he gives weight to characterize atoms while for Leucippus they are characterized by a "figure", an "order" and a "position" in the cosmos.[5] They are, besides, creating the whole with the intrinsic movement in the vacuum, producing the diverse flux of being. Their movement is influenced by the Parenklisis (Lucretius names it Clinamen) and that is determined by the chance. These ideas foreshadowed our understanding of traditional physics until the nature of atoms was discovered in the 20th century.[citation needed]

Plato developed this distinction between true reality and illusion, in arguing that what is real are eternal and unchanging Forms or Ideas (a precursor to universals), of which things experienced in sensation are at best merely copies, and real only in so far as they copy (‘partake of’) such Forms. In general, Plato presumes that all nouns (e.g., ‘Beauty’) refer to real entities, whether sensible bodies or insensible Forms. Hence, in The Sophist Plato argues that Being is a Form in which all existent things participate and which they have in common (though it is unclear whether ‘Being’ is intended in the sense of existence, copula, or identity); and argues, against Parmenides, that Forms must exist not only of Being, but also of Negation and of non-Being (or Difference). [Aristotle's theory of universals|universals]] do not have an existence over and above the particular things which instantiate them.

In his Categories, Aristotle identifies ten possible kinds of thing that can be the subject or the predicate of a proposition. For Aristotle there are four different ontological dimensions:[citation needed]

i) according to the various categories or ways of addressing a being as such
ii) according to its truth or falsity (e.g. fake gold, counterfeit money)
iii) whether it exists in and of itself or simply 'comes along' by accident
iv) according to its potency, movement (energy) or finished presence (Metaphysics Book Theta).

René Descartes, with "je pense donc je suis" or "cogito ergo sum" or "I think, therefore I am", argued that "the self" is something that we can know exists with epistemological certainty. Descartes argued further that this knowledge could lead to a proof of the certainty of the existence of God, using the ontological argument that had been formulated first by Anselm of Canterbury.

Certainty about the existence of "the self" and "the other", however, came under increasing criticism in the 20th century. Sociological theorists, most notably George Herbert Mead and Erving Goffman, saw the Cartesian Other as a "Generalized Other", the imaginary audience that individuals use when thinking about the self. According to Mead, "we do not assume there is a self to begin with. Self is not presupposed as a stuff out of which the world arises. Rather the self arises in the world" [6][7] The Cartesian Other was also used by Sigmund Freud, who saw the superego as an abstract regulatory force, and Émile Durkheim who viewed this as a psychologically manifested entity which represented God in society at large.

Body and environment, questioning the meaning of being

Schools of subjectivism, objectivism and relativism existed at various times in the 20th century, and the postmodernists and body philosophers tried to reframe all these questions in terms of bodies taking some specific action in an environment. This relied to a great degree on insights derived from scientific research into animals taking instinctive action in natural and artificial settings—as studied by biology, ecology, and cognitive science.

The processes by which bodies related to environments became of great concern, and the idea of being itself became difficult to really define. What did people mean when they said "A is B", "A must be B", "A was B"...? Some linguists advocated dropping the verb "to be" from the English language, leaving "E Prime", supposedly less prone to bad abstractions. Others, mostly philosophers, tried to dig into the word and its usage. Heidegger distinguished human being as existence from the being of things in the world. Heidegger proposes that our way of being human and the way the world is for us are cast historically through a fundamental ontological questioning. These fundamental ontological categories provide the basis for communication in an age: a horizon of unspoken and seemingly unquestionable background meanings, such as human beings understood unquestioningly as subjects and other entities understood unquestioningly as objects. Because these basic ontological meanings both generate and are regenerated in everyday interactions, the locus of our way of being in a historical epoch is the communicative event of language in use.[6] For Heidegger, however, communication in the first place is not among human beings, but language itself shapes up in response to questioning (the inexhaustible meaning of) being.[8] Even the focus of traditional ontology on the 'whatness' or 'quidditas' of beings in their substantial, standing presence can be shifted to pose the question of the 'whoness' of human being itself.[9]