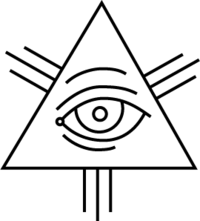 A Christian version of the Eye of Providence, emphasizing the triangle representing the Trinity.

The Eye of Providence (or the all-seeing eye of God) is a symbol showing an eye often surrounded by rays of light or a glory and usually enclosed by a triangle. It is sometimes interpreted as representing the eye of God watching over humankind (or divine providence).[1][2][3]

Religious use of the Eye

Imagery of an all-seeing eye can be traced back to Egyptian mythology and the Eye of Horus. It also appears in Buddhism, where Buddha is also regularly referred to as the "Eye of the World" throughout Buddhist scriptures (e.g. Mahaparinibbana Sutta) and is represented as a trinity in the shape of a triangle known as the Tiratna, or Triple Gem.[citation needed]

In Hinduism, the divine providence is associated with Lord Shiva, a major Hindu deity, who is one with great powers, yet lives a life of a sage and is known to keep himself intoxicated and meditating with bhang so that the world remains safe from his anger. He has an all seeing eye, the third eye on his forehead, that notices of everything that happens in the world, has an authority over death, rebirth and immortality.[citation needed] In Hinduism, the gods have a third eye which is described as being "all powerful and all seeing eye".[citation needed]

In Medieval and Renaissance European iconography, the Eye (often with the addition of an enclosing triangle) was an explicit image of the Christian Trinity. Seventeenth-century depictions of the Eye of Providence sometimes show it surrounded by clouds or sunbursts.

In 1782, the Eye of Providence was adopted as part of the symbolism on the reverse side of the Great Seal of the United States. It was first suggested as an element of the Great Seal by the first of three design committees in 1776 and is thought to be the suggestion of the artistic consultant, Pierre Eugene du Simitiere.[4] 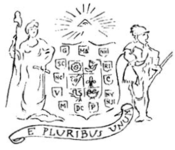 Original design for the Great Seal by Simitiere.

On the seal, the Eye is surrounded by the words Annuit Cœptis, meaning "He approves (or has approved) [our] undertakings", and Novus Ordo Seclorum, meaning "New Order of the Ages". The Eye is positioned above an unfinished pyramid with thirteen steps, representing the original thirteen states and the future growth of the country. The lowest level of the pyramid shows the year 1776 in Roman numerals. The combined implication is that the Eye, or God, favors the prosperity of the United States.

Perhaps due to its use in the design of the Great Seal, the Eye has made its way into other American seals and logos, notably the Seal of Colorado and DARPA's Information Awareness Office. It is also part of the City Seal of Kenosha, Wisconsin.

Today, the Eye of Providence is usually associated with Freemasonry. The Eye first appeared as part of the standard iconography of the Freemasons in 1797, with the publication of Thomas Smith Webb's Freemasons Monitor.[5] Here, it represents the all-seeing eye of God and is a reminder that a Mason's thoughts and deeds are always observed by God (who is referred to in Masonry as the Great Architect of the Universe). Typically, the Masonic Eye of Providence has a semi-circular glory below the eye. Sometimes the Eye is enclosed by a triangle.

Popular among conspiracy theorists is the claim that the Eye of Providence shown atop an unfinished pyramid on the Great Seal of the United States indicates the influence of Freemasonry in the founding of the United States. This was dramatized in the 2004 Disney film National Treasure. However, common Masonic use of the Eye dates to 14 years after the creation of the Great Seal. Furthermore, among the members of the various design committees for the Great Seal, only Benjamin Franklin was a Mason (and his ideas for the seal were not adopted). Indeed, many Masonic organizations have explicitly denied any connection to the creation of the Seal.[6][7]

Other selected uses of the symbol

Coat of arms of Braslaw, Belarus.