Paul-Henri Thiry, Baron d'Holbach (8 December 1723 – 21 January 1789[1]) was a French-German author, philosopher, encyclopedist and a prominent figure in the French Enlightenment. He was born Paul Heinrich Dietrich in Edesheim, near Landau in the Rhenish Palatinate, but lived and worked mainly in Paris, where he kept a salon. He is best known for his atheism and for his voluminous writings against religion, the most famous of them being the System of Nature (1770).

D'Holbach's mother (née Holbach) was the daughter of the Prince-Bishop's tax collector. His father, Johann Jakob Dietrich, was a wine-grower. He was raised in Paris by his uncle Franz Adam Holbach, who had become a millionaire by speculating on the Paris stock-exchange. With his financial support, d'Holbach attended the University of Leiden from 1744 to 1748 and went on to marry his second cousin, Basile-Geneviève d'Aine, in 1749. In 1753 both his uncle and his father died, leaving the 30-year-old d'Holbach with an enormous inheritance. D'Holbach would remain wealthy throughout his life.[2] In 1754, his wife died from an unknown disease. The distraught d'Holbach moved to the provinces for a brief period with his friend Baron Grimm and in the following year received a special dispensation from the Pope to marry his deceased wife's sister, Charlotte-Susanne d'Aine.[3] 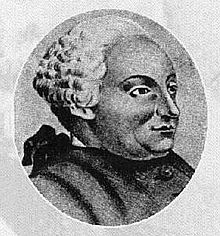 Although he spent much of his time at his country estate at Grandval, d'Holbach used his wealth to maintain one of the more notable and lavish Parisian salons, which soon became an important meeting place for the contributors to the Encyclopédie. Meetings were held regularly twice a week, on Sundays and Thursdays, in d'Holbach's home in rue Royale, but Saint-Roche between approximately 1750 - 1780. Visitors to the salon were exclusively males, and the tone of discussion highbrow, often extending to topics more extensive than those of other salons.[4] This, along with the excellent food, expensive wine, and a library of over 3000 volumes, attracted many notable visitors. Among the regulars in attendance at the salon—the coterie holbachique—were the following: Diderot, Grimm, Condillac, Condorcet, D'Alembert, Marmontel, Turgot, La Condamine, Raynal, Helvétius, Galiani, Morellet, Naigeon and, for a time, Jean-Jacques Rousseau. The salon was also visited by prominent British intellectuals, amongst them Adam Smith, David Hume, John Wilkes, Horace Walpole and Edward Gibbon.

D'Holbach was known for his generosity, often providing financial support discreetly or anonymously to his friends, amongst them Diderot. It is thought that the virtuous atheist Wolmar in Jean-Jacques Rousseau's Julie, ou la nouvelle Héloïse is based on d'Holbach.[2]

Holbach died in Paris on 21 January 1789, a few months before the French Revolution.[1] The authorship of his various anti-religious works did not become widely known until the early 19th century.

Contributions to the Encyclopédie 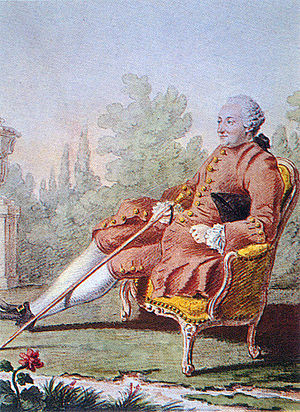 For the Encyclopédie d'Holbach authored and translated a large number of articles on topics ranging from politics and religion to chemistry and mineralogy. As a German who had become a naturalised Frenchman, he undertook the translation of many contemporary German works of natural philosophy into French. All in all, between 1751 and 1765 he contributed some four hundred articles to the project, mostly on scientific subjects, in addition to serving as the editor of several volumes on natural philosophy. D'Holbach may also have written several disparaging entries on non-Christian religions, intended as veiled criticisms of Christianity itself.[5]

Despite his extensive contributions to the Encyclopédie, d'Holbach is better known today for his philosophical writings, all of which were published anonymously or under pseudonyms and printed outside of France, usually in Amsterdam by Marc-Michel Rey. His philosophy was expressly materialistic and atheistic and is today categorised into the philosophical movement called French materialism. In 1761 Christianisme dévoilé ("Christianity Unveiled") appeared, in which he attacked Christianity and religion in general as an impediment to the moral advancement of humanity. The deistic Voltaire, denying authorship of the work, made known his aversion to d'Holbach's philosophy, writing that "[the work] is entirely opposed to my principles. This book leads to an atheistic philosophy that I detest."[6] Christianity Unveiled was followed by others, notably La Contagion sacrée (1768 - "The Sacred Contagion"), Théologie portative (1768 - "Portable Theology") and Essai sur les préjugés (1770 - "Essay on prejudice"). D'Holbach was helped in these endeavours by Jacques-André Naigeon, who would later become his literary executor.

The System of Nature

Further information: The System of Nature

In 1770, d'Holbach published his most famous book, The System of Nature (Le Système de la nature), under the name of Jean-Baptiste de Mirabaud, the secretary of the Academie Francaise who had died ten years previously. Denying the existence of a deity, and refusing to admit as evidence all a priori arguments, d'Holbach saw in the universe nothing save matter in motion, bound by inexorable natural laws of cause and effect. There is, he wrote "no necessity to have recourse to supernatural powers to account for the formation of things."[7]

The System of Nature is a long and extensive work presenting a thoroughly naturalistic view of the world. Some d'Holbach scholars have pointed out that Denis Diderot was a close personal friend of d'Holbach's, and that it is unclear to what extent d'Holbach was influenced by him. Indeed, Diderot may possibly have been the author of parts of the System of Nature.[8] Regardless, however, of the extent of Diderot's contribution to the System of Nature, it is on the basis of this work that d'Holbach's philosophy has been called "the culmination of French materialism and atheism."[9]

D'Holbach's objectives in challenging religion were primarily moral: He saw the institutions of Christianity as a major obstacle to the improvement of society. For him, the foundation of morality was to be sought not in Scripture but in happiness: "It would be useless and almost unjust to insist upon a man's being virtuous if he cannot be so without being unhappy. So long as vice renders him happy, he should love vice."[10] D'Holbach's radicalism posited that humans were fundamentally motivated by the pursuit of enlightened self-interest, which is what he meant by "society," rather than by empty and selfish gratification of purely individual needs. Chapter 15 of Part I of System of Nature is titled "Of Man's true Interest, or of the Ideas he forms to himself of Happiness.--Man cannot be happy without Virtue."[11]

It is quite natural in man, it is extremely reasonable, it is absolutely necessary, to desire those things which can contribute to augment the sum of his felicity. Pleasure, riches, power, are objects worthy his ambition, deserving his most strenuous efforts, when he has learned how to employ them; when he has acquired the faculty of making them render his existence really more agreeable. It is impossible to censure him who desires them, to despise him who commands them, but when to obtain them he employs odious means; or when after he has obtained them he makes a pernicious use of them, injurious to himself, prejudicial to others; let him wish for power, let him seek after grandeur, let him be ambitious of reputation, when he can show just pretensions to them; when he can obtain them, without making the purchase at the expense of his own repose, or that of the beings with whom he lives: let him desire riches, when he knows how to make a use of them that is truly advantageous for himself, really beneficial for others; but never let him employ those means to procure them of which he may be ashamed; with which he may be obliged to reproach himself; which may draw upon him the hatred of his associates; or which may render him obnoxious to the castigation of society: let him always recollect, that his solid happiness should rest its foundations upon its own esteem,--upon the advantages he procures for others; above all, never let him for a moment forget, that of all the objects to which his ambition may point, the most impracticable for a being who lives in society, is that of attempting to render himself exclusively happy. From System of Nature, Chapter 15, Part I.

The explicitly atheistic and materialistic The System of Nature presented a core of radical ideas which many contemporaries, both churchmen and philosophes found disturbing, and thus prompted a strong reaction. The Catholic Church in France threatened the crown with withdrawal of financial support unless it effectively suppressed the circulation of the book. The list of people writing refutations of the work was long. The Roman Catholic Church had its pre-eminent theologian Nicolas-Sylvestre Bergier write a refutation of the Système titled Examen du matérialisme (Materialism examined). Voltaire hastily seized his pen to refute the philosophy of the Système in the article "Dieu" in his Dictionnaire philosophique, while Frederick the Great also drew up an answer to it. Its principles are summed up in a more popular form in d'Holbach's Common Sense, or Natural Ideas Opposed to Supernatural (Bon Sens, on idées naturelles opposees aux idées surnaturelles) (Amsterdam, 1772).

In his last works, d'Holbach's attention largely shifts away from religious metaphysics towards moral and political questions. In the Système social (1773), the Politique naturelle (1773–1774) and the Morale universelle (1776) he attempts to describe a system of morality in place of the Christian one he had so fiercely attacked, but these later writings were not as popular or influential as his earlier work.[citation needed] D'Holbach was strongly critical of abuses of power in France and abroad. Contrary to the revolutionary spirit of the time however, he called for the educated classes to reform the corrupt system of government and warned against revolution, democracy, and mob rule.

The materialistic philosophy of Baron d'Holbach had an influence in the historical materialism of Karl Marx, who studied the ideas of d'Holbach and his fellow French thinker Helvetius in Paris.[13]