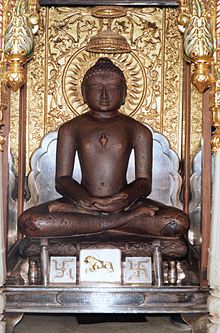 In Jainism, a Tīrthaṅkara (Sanskrit: तीर्थंकर "ford-Maker", Old Tamil: கடவுள் Kaṭavuḷ) is a human being who achieves moksa ("liberation, enlightenment") through asceticism and who then becomes a role-model and teacher for those seeking spiritual guidance.

According to Jain teachings, a being who obtains Kevala Jnana - a kevalin - is sure to attain moksa. One who attains moksa is referred to as a siddha, but only a siddha who establishes or revitalises Jainism - one who establishes a "ford" or tīrtha across the river of human misery - is called a tīrthaṅkara.

The Tīrthaṅkaras' religious teachings form the Jain canons. The inner knowledge of all Tīrthaṅkaras is perfect and identical in every respect, for the teachings of one Tīrthaṅkara do not contradict those of another. However, the degree of elaboration varies according to the spiritual advancement and purity of humans during that period. The higher the spiritual advancement and purity of mind, the lower the elaboration required.

At the end of his human life-span, a Tīrthaṅkara achieves moksa or nirvana, ending the cycle of infinite births and deaths.

The next Tīrthaṅkara in our part of the universe will be born at the beginning of the third era of the next (ascending) half cycle of time, in approximately 81,500 years.

As Tīrthaṅkaras direct us to enlightenment, their statues are worshipped in Jain temples by Jains aspiring to achieve enlightenment. Tīrthaṅkaras are not God or gods. Jainism does not believe in the existence of God in the sense of a creator; they are considered super-human beings but also lack full enlightenment. 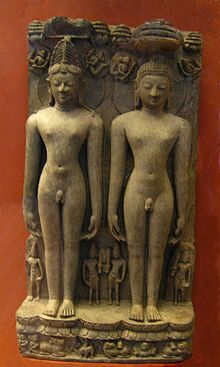 Depictions of the Tīrthaṅkaras in various forms, including images and statues, are always represented as seated with their legs crossed in front, the toes of one foot resting close upon the knee of the other, and the right hand lying over the left in the lap. Only two are represented differently: that of Parshva, the twenty-third, who has snake-hoods over him, and Suparshvanath, the seventh, whom the Digambaras depict with a smaller group of snake-hoods.

Digambara representations are nude however those of the Svetambaras are decorated with crowns and ornaments. They are further distinguished from one another in representations by their attendant Yakshas and Yakshinis, as well as by their associated chihnas or Lanchans (cognizances) carved on the cushions of their thrones.

All but two of the Jains are ascribed to the Ikshvaku dynasty. Munisuvrata, the twentieth, and Neminatha, the twenty-second, were of the Harivamsa. Jain canons state that Rishabha, the first Tīrthaṅkara, founded the Ikshvaku.

All but Rishabha received diksha “consecration” and Kevala Jnana (complete enlightenment) at their native places. Rishabha became a ‘’Kevalin’’ at Purimatala, Nemi at Girnar, and Mahavira at the Rijuvaluka river. Twenty Tīrthaṅkaras achieved nirvana on Sammet Sikhar. Digamaras believe Rishabha did so on Mount Kailash while Svetambaras state he achieved nirvana on Mount Ashtapada. Vasupujya attained nirvana at Champapuri in North Bengal; Neminatha on Mount Girnar in Gujarat; and Mahavira, the last, at Pawapuri, near modern Bihar's capital, Patna.

Twenty-one of the Tirthakaras are said to have attained Moksha in the kayotsarga “standing mediation” posture and Rishabha, Nemi and Mahavira in the padmasana “lotus throne” posture.

For each Siddha the particulars are given below:

The total length of the lifespans of all 24 Tīrthaṅkaras combined equals 2.603672 Sextillion years.

At present time and age, there are no living Tīrthaṅkaras on this Earth. The last living on Earth in this age was Mahavira, who attained omniscience some 2500 years ago.

Nevertheless, Jains believe the universe is never devoid of living Tīrthaṅkaras at any point of time, even though they may at times exist only in other parts of the universe.