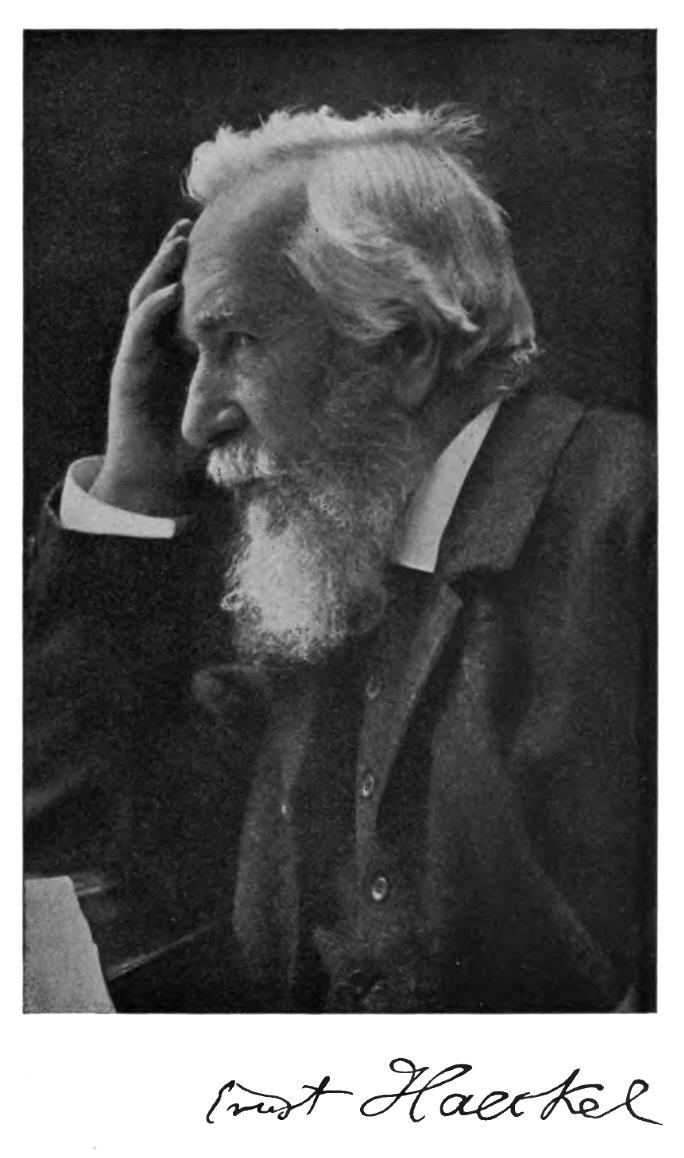 Haeckel studied under at the for three years, earning a doctorate in ,

Haeckel's political beliefs were influenced by his affinity for the German Romantic movement coupled with his acceptance of a form of . Rather than being a strict Darwinian, Haeckel believed that racial characteristics were acquired through interactions with the environment and that directly followed . He believed the s to be instances of "applied biology". Most of these arguments have been shown to be over-generalizations at best and flatly incorrect at worst in modern biology and .

Haeckel was the first person known to use the term "First World War". Shortly after the start of the war Haeckel wrote:

The "European War" became known as "The Great War", and it was not until 1931, with the beginning realization that another global war might be possible, that there is any other recorded use of the term "First World War".

Haeckel was a , an accomplished artist and illustrator, and later a of . Although Haeckel's ideas are important to the history of , and he was a competent most famous for his work on , many speculative concepts that he championed are now considered incorrect. For example, Haeckel described and named hypothetical ancestral s that have never been found.

He was one of the first to consider as a branch of . He also proposed many now ubiquitous terms including "", "phylogeny", "" ("oekologie"),

Haeckel advanced the "" which proposed a link between (development of form) and (evolutionary descent), summed up in the phrase "ontogeny recapitulates phylogeny". His concept of recapitulation has been disputed in the form he gave it (now called "strong recapitulation"). "Strong" recapitulation hypothesis views ontogeny as repeating forms of the ancestors, while "weak" recapitulation means that what is repeated (and built upon) is the ancestral embryonic development process. [Richardson and Keuck, (Biol. Review (2002), 77, pp. 495-528) show that it is a simplification to suppose that Haeckel held the recapitualtion theory in its strong form. They quote Haeckel as saying "If [recapitulation] was always complete, it would be a very easy task to construct whole phylogeny on the basis of ontogeny. ... There is certainly, even now, a number of lower vertebarte animals (e.g. some Anthozoa and Vermes) where we are authorised to interpret each embrylogical form directly as the historical representation or portrait-like silhouette of an extinct ancestral form. But in a great majority of animals, including man, this is not possible because the infinitely varied conditions of existence have led the embryonic forms themselves to be changed and to partly lose their original condition (Haeckel, 1903: pp. 435-436)"] He supported the theory with that have since been shown to be oversimplified and in part inaccurate, and the theory is now considered an oversimplification of quite complicated relationships. Haeckel introduced the concept of "", which is the change in timing of over the course of evolution.

Haeckel was a flamboyant figure. He sometimes took great (and non-scientific) leaps from available evidence. For example, at the time that Darwin first published "" (1859), no remains of human ancestors had yet been found. Haeckel postulated that evidence of human evolution would be found in the (now ), and described these theoretical remains in great detail. He even named the as-of-yet unfound species, "Pithecanthropus alalus", and charged his students to go find it. (Richard and were two of Haeckel's many important students.)

One student did find the remains: a young Dutchman named went to the and dug up the remains of , the first human ancestral remains ever found. These remains originally carried Haeckel's "" label, though they were later reclassified as "".

It has been claimed (Richardson 1998, Richardson and Keuck 2002) that some of Haeckel's of 1874 were fabricated. [ Michael K. Richardson. 1998. "Haeckel's embryos continued." "Science" 281:1289, quoted in NaturalScience.com webpage [http://naturalscience.com/ns/letters/ns_let17.html Re: "Ontogeny and phylogeny"] : A Letter from Richard Bassetti; Editor's note.] ["While some criticisms of the drawings are legitimate, others are more tenditious", Richardson and Keuck "Haeckel's ABC of evolution and development"," Biol. Rev." (2002), 77, pp. 495-528. Quoted from p. 495.] There were multiple versions of the embryo drawings, and Haeckel rejected the claims of fraud but did admit one error which he corrected. It was later said that "there is evidence of sleight of hand" on both sides of the feud between Haeckel and . [Richardson & Keuck 2001. See for example, their Fig. 7, showing His's drawing of the forelimb of a deer embryo developing a clef, compared with a similar drawing (Sakurai, 1906) showing the forelimb initially developing as a digital plate with rays. Richardson & Keuck say "Unfortunately His's embryos are mostly at later stages than the nearly identical early stage embryos illustrated by Haeckel [top row of Haeckel's famous drawing] . Thus they do not inform the debate and may themselves be disingenuous.", p. 518.] The controversy involves several different issues (see more details at: ).

Some have claimed that Darwin relied on Haeckel's embryo drawings as proof of evolution ["Darwin relied on the work of German biologist Ernst Haeckel ... Darwin based his inference of common ancestry on the belief that the earliest stages of embryo development are the most similar. Haeckel's drawings, however, entirely omit the earliest stages ...", Jonathan Wells, Survival of the Fakest, "The American Spectator", Dec 2000-Jan 2001. Note however, Darwin (1871) credits Huxley with the idea of comparing the embryos and quoted a statement by T. Huxley, that it is "quite in the later stages of development that the young human being presents marked differences from the young ape ..." (from Huxley's Man’s Place in Nature, 1863, p. 67). Note the subtle difference between Huxley’s claim – the final stages are most different - and what has been said Darwin relied on "via" Haeckel – that the earliest stages are the most similar.] [ "The Controversy over Evolution in Biology Textbooks" (Texas, Textbooks and Evolution), Dr. Raymond G. Bohlin (President), Probe Ministries, 2003, Probe.org webpage: [http://www.probe.org/content/view/902/67/ ProbeOrg-Textbook-Controversy] : mentions Haeckel drawings.]

It has been claimed that Ernst Haeckel sent a letter to the publication of "Münchener Allgemeine Zeitung" (translated: "Munich General Newspaper") which reads, as translated: "A small portion of my embryo-pictures (possibly 6 or 8 in a hundred) are really (in Dr Brass’s sense of the word) 'falsified' — all those, namely, in which the disclosed material for inspection is so incomplete or insufficient that one is compelled in a restoration of a connected development series to fill up the gaps through hypotheses, and to reconstruct the missing members through comparative syntheses. What difficulties this task encounters, and how easily the drafts--man may blunder in it, the embryologist alone can judge."

Darwin’s 1859 book "" had immense popular influence, but although its sales exceeded its publisher's hopes it was a technical book rather than a work of popular science: long, difficult and with few illustrations. One of Haeckel's books did a great deal to explain his version of "" to the world. It was a bestselling, provocatively illustrated book in German, titled "Natürliche Schöpfungsgeschichte", published in Berlin in 1868, and translated into English as "The History of Creation" in 1876. It was frequently reprinted until 1926.

Haeckel argued that human evolution consisted of precisely 22 phases, the 21st — the "missing link" — being a halfway step between apes and humans. He even formally named this missing link "Pithecanthropus alalus", translated as "ape man without speech." (The missing link was what the Dutchman , discoverer of , would later resolve to find.)Fact|date=August 2008

Haeckel's entire literary output was extensive, working as a professor at the for 47 years, and even at the time of the celebration of his 60th birthday at in 1894, Haeckel had produced 42 works with nearly 13,000 pages, besides numerous scientific s and illustrations.

Among his many books, Ernst Haeckel wrote:
*"General Morphology" (1866)
*"Natürliche Schöpfungsgeschichte" (1868) - in English [http://www.geology.19thcenturyscience.org/books/1876-Haeckel-HistCrea/Vol-I/htm/doc.html "The History of Creation"]
*"Freie Wissenschaft und freie Lehre" (1877), in English, "Freedom in Science and Teaching", a reply to a speech in which objected to the teaching of in schools, on the grounds that evolution was an unproven hypothesis.

* Richard Milner, "The Encyclopedia of Evolution: Humanity's Search for Its Origins", Henry Holt, 1993.

* Robert J. Richards, "The Tragic Sense of Life: Ernst Haeckel and the Struggle over Evolutionary Thought", University of Chicago Press, 2008.