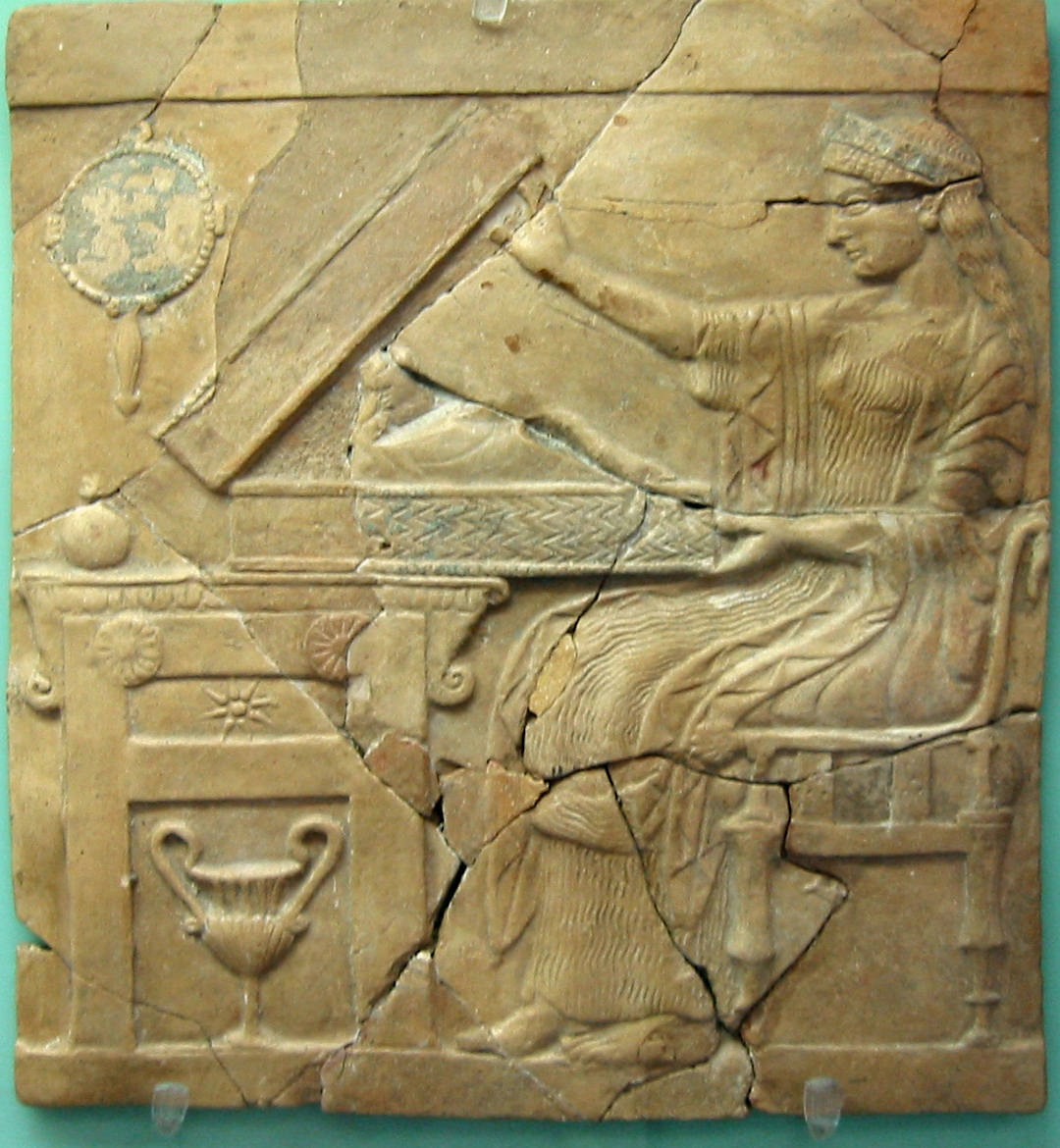 In , Persephone (Kore or Cora) was the embodiment of the Earth's fertility at the same time that she was the Queen of the Underworld, the "korē" (or young maiden), and the parthenogenic daughter of —and, in later Classical myths, a daughter of Demeter and . In the Olympian version she also becomes the consort of when he becomes the deity that governs the underworld.

The figure of Persephone is well-known today. Her story has great emotional power: an innocent , a mother's grief over her abduction, and great joy after her daughter is returned. It is also cited frequently as a paradigm of myths that explain natural processes, with the descent and return of the goddess bringing about the change of .

In Greek art, Persephone is invariably portrayed robed. She may be carrying a sheaf of grain and smiling demurely with the "" of the Kore of Antenor.

The Romans first heard of her from the Aeolian and Dorian cities of , who used the dialectal variant Proserpine (Προσερπινη, "Proserpinē"). Hence, in she was called , and as a revived Roman Proserpina, she became an emblematic figure of the . At , perhaps uniquely, Persephone was the protector of marriage, a role usually assumed by ; in the iconography of votive plaques at Locri, her abduction and marriage to Hades served as an emblem of the marital state; children at Locri were dedicated to Proserpina, and maidens about to be wed brought her their "" to be blessed. [Christiane Sourvinou-Inwood, "Persephone" "The Journal of Hellenic Studies" 98 (1978:101-121).]

In a Classical period text ascribed to , c. 490–430 BC, [Empedocles was a Greek pre-Socratic philosopher who was a citizen of Agrigentum, a Greek colony in Sicily.] describing a correspondence between four deities and the , the name "Nestis" for water apparently refers to Persephone. "Now hear the fourfold roots of everything: enlivening Hera, Hades, shining Zeus. And Nestis, moistening mortal springs with tears". [Peter Kingsley, in "Ancient Philosophy, Mystery, and Magic: Empedocles and Pythagorean Tradition" (Oxford University Press, 1995).]

Of the four deities of Empedocles's elements, it is the name of Persephone alone that is — Nestis is a euphemistic cult title— [Kingsley 1995 identifies "Nestis" as a cult title of Persephone.] for the Greeks knew another face of Persephone as well. She was also the terrible [Queen of the Dead] , whose name was not safe to speak aloud, who was euphemistically named, simply as, "Kore", "The Maiden", a vestige of her archaic role as the deity ruling the underworld.

The Queen of the Underworld

There is an archaic role for Persephone as the dread queen of the Underworld, whose very name it was forbidden to speak. In the , commonly dated circa 800 to 600 BC, when goes to the Underworld, he refers to her as the Iron Queen. Her central myth, for all its emotional familiarity, was also the tacit context of the secret initiatory mystery rites of regeneration at Eleusis, which promised immortality to their awe-struck participants&mdash;an immortality in her world beneath the soil, feasting with the heroes who dined beneath her dread gaze (Kerenyi 1960, 1967).

In the later Olympian pantheon of Classical Greece, Persephone is given a father: according to 's "Theogony", Persephone was the daughter produced by the union of and . "And he [Zeus] came to the bed of bountiful Demeter, who bore white-armed Persephone, stolen by Hades from her mother's side".

Unlike every other offspring of an Olympian pairing of deities, Persephone has no stable position at Olympus. Persephone used to live far away from the other deities, a goddess within Nature herself before the days of planting seeds and nurturing plants. In the Olympian telling, [ [http://www.theoi.com/Olympios/HermesLoves.html LOVES OF HERMES : Greek mythology ] ] the gods , , , and , had all wooed Persephone, but Demeter rejected all their gifts and hid her daughter away from the company of the Olympian deities. Thus, Persephone lived a peaceful life before she became the of the underworld, which, according to Olympian mythographers, did not occur until abducted her and brought her into the underworld. She was innocently picking flowers with some s&mdash;, , and , the Homeric hymn says&mdash;, or , or &mdash; in a field in when Hades came to abduct her, bursting through a cleft in the earth; the nymphs were changed by Demeter into the s for not having interfered. Life came to a standstill as the devastated , goddess of the , searched everywhere for her lost daughter. , the sun, who sees everything, eventually told Demeter what had happened.

Finally, Zeus, pressured by the cries of the hungry people and by the other deities who also heard their anguish, could not put up with the dying earth and forced Hades to return Persephone. But before she was released to , who had been sent to retrieve her, Hades tricked her into eating seeds, (seven, eight, or perhaps four according to the telling) which forced her to return to the underworld for a season each year. In some versions, informed the other deities that Persephone had eaten the pomegranate seeds. When Demeter and her daughter were united, the Earth flourished with vegetation and color, but for four months each year, when Persephone returned to the underworld, the earth once again became a barren realm. This is an origin story to explain the seasons.

In an earlier version, rescued Persephone. On an Attic red-figured bell krater of ca 440 BCE in the , Persephone is rising as if up stairs from a cleft in the earth, while Hermes stands aside; Hecate, holding two torches, looks back as she leads her to the enthroned Demeter. [The figures are unmistakable, as they are inscribed "Persophata, Hermes, Hekate, Demeter"; Gisela M. A. Richter, "An Athenian Vase with the Return of Persephone" "The Metropolitan Museum of Art Bulletin" 26.10 (October 1931:245-248) ]

In the earliest known version the "dreaded goddess", Persephone, was herself Queen of the Underworld (Burkert or Kerenyi).

In some versions, Demeter forbids the earth to produce, in others she is so busy looking for Persephone that she neglects the earth, or her duties as the Earth which she represents, and in some the depth of her despair causes nothing to grow.

This myth also can be interpreted as an allegory of ancient Greek marriage rituals. The Classical Greeks felt that was a sort of abduction of the bride by the groom from the bride's family, and this myth may have explained the origins of the marriage ritual. The more popular etiological explanation of the seasons may have been a later interpretation.

The tenth-century encyclopedia "", "s.v." "", introduces a goddess of a blessed assured to Orphic mystery initiates. This Macaria is asserted to be the daughter of , and Persephone, though there is no previous mention of her.

In one version of the myth, Persephone, as Queen of Hades, only mercifully relinquished a subject once; because the music of was so hauntingly sad, she allowed Orpheus to bring his wife back to the land of the living, as long as she walked behind him and he never tried to look at her face until they reached the surface. Orpheus agreed, but failed, looking back at the very end to make sure his wife was following, and he lost Eurydice forever.

Persephone also figures in the story of , the Syrian consort of . When Adonis was born, Aphrodite took him under her wing, seducing him with the help of Helene, her friend, and was entranced by his unearthly beauty. She gave him to Persephone to watch over, but Persephone also was amazed at his beauty and refused to give him back. The argument between the two goddesses was settled, either by , or by , (depending on the antiquity of the myth), with Adonis spending four months with , four months with Persephone and four months of the year on his own. This later myth placed a god into the position of a goddess in the cycle of the seasons.

When Hades pursued a nymph named , Persephone turned her into a mint plant.

Persephone was the object of ' affections. In a late myth, Pirithous and , his friend, pledged to marry daughters of . Theseus chose and together they kidnapped her and decided to hold onto her until she was old enough to marry. Pirithous chose Persephone. They left Helen with Theseus' mother, , and traveled to the underworld, domain of Persephone and her husband, . Hades pretended to offer them hospitality and set a feast; as soon as the pair sat down, snakes coiled around their feet and held them there. Edith Hamilton called it a "Chair of Forgetfulness" that they sat upon. It also should be noted that was able to save Theseus from this fate when he was in the Underworld, but Hades forced Pirithous to remain seated forever.

Persephone and her mother Demeter were often referred to as aspects of the same Earth goddess, and were called "the Demeters" or simply "the goddesses."

Persephone before the Greeks?

Some modern scholars have argued that the "cult of Persephone" was a continuation of or Minoan goddess-worship. Among classicists, this thesis has been argued by Gunther Zuntz (Zuntz 1973) and cautiously included by in his definitive "Greek Religion".

More daringly, the mythologist has identified Persephone with the nameless "mistress of the " at from the Bronze Age civilization on that flourished from 1700 BC.

On the other hand, the hypothesis of an Aegean cult of the Earth Mother has come under some criticism in recent years. For more on both sides of the controversy, see .

Inspired by , , and modern mythologers, some scholars have labeled Persephone a .

"As she was gathering flowers with her playmates in a meadow, the earth opened and Pluto, god of the dead, appeared and carried her off to be his queen in the world below. ... Torch in hand, her sorrowing mother sought her through the wide world, and finding her not she forbade the earth to put forth its increase. So all that year not a blade of corn grew on the earth, and men would have died of hunger if Zeus had not persuaded Pluto to let Persephone go. But before he let her go Pluto made her eat the seed of a pomegranate, and thus she could not stay away from him for ever. So it was arranged that she should spend two-thirds (according to later authors, "one-half") of every year with her mother and the heavenly gods, and should pass the rest of the year with Pluto beneath the earth. ... As wife of Pluto, she sent spectres, ruled the ghosts, and carried into effect the "curses of men"."

Persephone is the name of a Main belt with a diameter of 49.1km, discovered by in in Heidelberg.