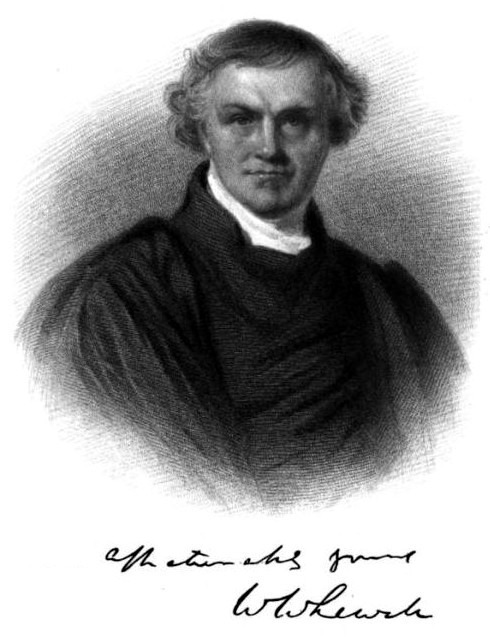 Whewell was born in Lancaster, . His father, a carpenter, wished him to follow his trade, but his success in at Lancaster and Heversham s won him an exhibition (a type of scholarship) at (1812). In 1814 he was awarded the for poetry. [cite book|title=A Complete Collection of the English Poems which Have Obtained the Chancellor's Gold Medal in the University of Cambridge|publisher=W. Metcalfe|location=Cambridge|url=http://books.google.co.uk/books/pdf/A_Complete_Collection_of_the_English_Poe.pdf?id=Gw6GyHofIIAC&output=pdf&sig=ACfU3U0C1ql6Dwby1ZNXGr1xK8t55UU3YQ|author=University of Cambridge|format=PDF|year=1859|accessdate=2008-10-01] He was in 1816, President of the in 1817, became fellow and tutor of his college, and, in 1841, succeeded Dr Christopher Wordsworth as master. He was of from 1828 to 1832 and (then called "moral theology and casuistical divinity") from 1838 to 1855.

What is most often remarked about Whewell is the breadth of his endeavours. At a time when men of science were becoming increasingly specialised, Whewell appears as a vestige of an earlier era when men of science dabbled in a bit of everything. He researched ocean tides (for which he won the Royal Medal), published work in the disciplines of , , , , and , while also finding the time to compose , author a , translate the works of , and write s and theological tracts.

Tracing the history and development of science

For all these pursuits, it comes as no surprise that his best-known works are two voluminous books which attempt to map and systematize the development of the sciences, "History of the Inductive Sciences" (1837) and "The Philosophy of the Inductive Sciences, Founded Upon Their History" (1840). While the History traced how each branch of the sciences had evolved since antiquity, Whewell viewed the as the “Moral” of the previous work as it sought to extract a universal theory of knowledge through the history he had just traced. In the "Philosophy", Whewell attempted to follow Francis Bacon's plan for discovery of an effectual art of discovery. He examined ideas ("explication of conceptions") and by the "colligation of facts" endeavoured to unite these ideas with the facts and so construct science. But no art of discovery, such as Bacon anticipated, follows, for "invention, sagacity, genius" are needed at each step.

Whewell analysed into three steps:
* The selection of the (fundamental) idea, such as space, number, cause, or likeness (resemblance);
* The formation of the conception, or more special modification of those ideas, as a circle, a uniform force, etc.; and,
* The determination of magnitudes.

Here, as in his ethical doctrine, Whewell was moved by opposition to contemporary English empiricism. Following , he asserted against the "a priori" nature of necessary truth, and by his rules for the construction of conceptions he dispensed with the inductive methods of Mill.

One of Whewell's greatest gifts to science was his wordsmithing. He often corresponded with many in his field and helped them come up with new terms for their discoveries. In fact, Whewell came up with the term "" itself. (They had previously been known as "natural philosophers" or "men of science"). Whewell also contributed the terms , , , and , amongst others; Whewell suggested the terms and to ; this terminology persists in electrical technology to this day.

Whewell was prominent not only in scientific research and philosophy, but also in and college administration. His first work, "An Elementary Treatise on Mechanics" (1819), cooperated with those of and in reforming the Cambridge method of mathematical teaching. His work and publications also helped influence the recognition of the moral and natural sciences as an integral part of the Cambridge curriculum. In general, however, especially in later years, he opposed reform: he defended the , and in a controversy with (1834), opposed the admission of s; he upheld the clerical fellowship system, the privileged class of "fellow-commoners," and the authority of heads of colleges in university affairs. He opposed the appointment of the University Commission (1850), and wrote two pamphlets ("Remarks") against the reform of the university (1855). He stood against the scheme of entrusting elections to the members of the senate and instead, advocated the use of college funds and the subvention of scientific and professorial work.

Aside from Science, Whewell was also interested in the throughout his life. He is best known for his writings on , specifically his book, "Architectural Notes on German Churches" (first published in 1830). In this work, Whewell established a strict nomenclature for German Gothic churches and came up with a theory of stylistic development. His work is associated with the "scientific trend" of architectural writers, along with and Robert Willis.

Whewell's works in philosophy and morals

Between 1835 and 1861 Whewell produced various works on the philosophy of s and , the chief of which, "Elements of Morality", including "Polity", was published in 1845. The peculiarity of this work--written, of course, from what is known as the intuitional point of view--is its fivefold division of the springs of action and of their objects, of the primary and universal rights of man (personal security, property, contract, family rights and government), and of the cardinal virtues (, , , and ).

Among Whewell's other works&mdash;too numerous to mention&mdash;were popular writings such as the third "" "Astronomy and General Physics considered with reference to Natural Theology" (1833), and the essay, "Of the Plurality of Worlds" (1854), in which he argued against the of life on other planets, and also the "nic Dialogues for English Readers" (1850-1861), the "Lectures on the History of Moral Philosophy in England" (1852), the essay, "Of a Liberal Education in General, with particular reference to the Leading Studies of the University of Cambridge" (1845), the important edition and abridged translation of , "De jure belli ac pacis" (1853), and the edition of the "Mathematical Works" of (1860).

Whewell was one of the Cambridge dons whom met during his education there, and after the "Beagle" voyage when Darwin was at the very start of "" Darwin placed a citation from Whewell's "Bridgewater Treatise" showing his ideas to be founded on a of a creator establishing laws: [Harvard reference
Surname = Darwin
Given = Charles
Authorlink = Charles Darwin
Year = 1859
Title = On the Origin of Species by Means of Natural Selection, or the Preservation of Favoured Races in the Struggle for Life
Publisher = London: John Murray
URL = http://darwin-online.org.uk/content/frameset?itemID=F373&viewtype=text&pageseq=7 ( page ii.) Retrieved on ]

"But with regard to the material world, we can at least go so far as this-we can perceive that events are brought about not by insulated interpositions of Divine power, exerted in each particular case, but by the establishment of general laws."

Checklist of works by Whewell

(1850) Mathematical exposition of some doctrines of political economy: second memoir. "Transactions of the Cambridge Philosophical Society" 9:128-49.

(1857) "History of the Inductive Sciences, from the earliest to the present time". 2 vols, New York.

(1860a) "On the philosophy of discovery: chapters historical and critical". London.

*Citation
id = :11615935
url= http://www.ncbi.nlm.nih.gov/pubmed/11615935
last=Losee
first=J
publication-date=1983 Jun
year=1983
title=Whewell and Mill on the relation between philosophy of science and history of science.
volume=14
issue=2
periodical=Studies in history and philosophy of science
pages=113-26

*Citation
id = :11615591
url= http://www.ncbi.nlm.nih.gov/pubmed/11615591
last=Ruse
first=M
publication-date=1975 Jun
year=1975
title=Darwin's debt to philosophy: an examination of the influence of the philosophical ideas of John F. W. Herschel and William Whewell on the development of Charles Darwin's theory of evolution.
volume=6
issue=2
periodical=Studies in history and philosophy of science
pages=159-81

* [http://www.archive.org/details/philosinductsci01wewrich The philosophy of the inductive sciences, founded upon their history (1847)- Complete Text]
* [http://plato.stanford.edu/archives/sum2004/entries/whewell/ William Whewell] by Laura J. Snyder, from [http://plato.stanford.edu/index.html Stanford Encyclopedia of Philosophy]
* [http://www.ecn.bris.ac.uk/het/whewell/contents.htm Six Lectures] from [http://socserv2.socsci.mcmaster.ca/~econ/ugcm/3ll3/index.html Archive for the History of Economic Thought] - papers on mathematical economics as well as a set of introductory lectures
* [http://cepa.newschool.edu/het/profiles/whewell.htm William Whewell] from [http://cepa.newschool.edu/het/index.htm History of Economic Thought]
* [http://janus.lib.cam.ac.uk/db/node.xsp?id=EAD%2FGBR%2F0016%2FWHEWELL Papers of William Whewell]
* [http://www.trin.cam.ac.uk/index.php?pageid=172 The Master of Trinity] at