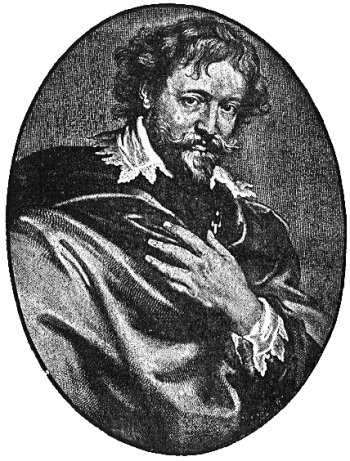 Peter Paul Rubens (, – , ) was a prolific seventeenth-century , and a proponent of an exuberant style that emphasized movement, color, and sensuality. He is well-known for his s, portraits, landscapes, and s of mythological and allegorical subjects.

In addition to running a large studio in which produced paintings popular with nobility and art collectors throughout Europe, Rubens was a classically-educated humanist scholar, art collector, and diplomat who was ed by both Philip IV, king of Spain, and Charles I, king of England.

Rubens was born in , , to Jan Rubens and Maria Pypelincks. His father, a Calvinist, and mother fled Antwerp for in 1568, after increased religious turmoil and persecution of s during the rule of the by the Duke of Alba. Jan Rubens became the legal advisor (and lover) to , the second wife of William I of Orange, and settled at her court in Siegen in 1570. Following Jan Rubens' imprisonment for the affair, Peter Paul Rubens was born in 1577. The family returned to Cologne the next year. In 1589, two years after his father's death, Rubens moved with his mother to Antwerp, where he was raised Catholic. Religion figured prominently in much of his work and Rubens later became one of the leading voices of the Catholic Counter-Reformation style of painting. [Belkin (1998): 11–18.]

In Antwerp, Rubens received a humanist education, studying Latin and classical literature. By fourteen he began his artistic apprenticeship with . Subsequently, he studied under two of the city's leading painters of the time, the late mannerists and . [Held (1983): 14-35.] Much of his earliest training involved copying earlier artists' works, such as s by and Marcantonio Raimondi's s after . Rubens completed his education in 1598, at which time he entered the as an independent master. [Belkin (1998): 22–38.]

In 1600, Rubens traveled to Italy. He stopped first in , where he saw paintings by , Veronese, and , before settling in at the court of duke . The coloring and compositions of Veronese and Tintoretto had an immediate effect on Rubens's painting, and his later, mature style was profoundly influenced by . [Belkin (1998): 42; 57.] With financial support from the duke, Rubens traveled to by way of in 1601. There, he studied classical Greek and Roman art and copied works of the Italian masters. The sculpture "" was especially influential on him, as was the art of , and . [Belkin (1998): 52–57] He was also influenced by the recent, highly naturalistic paintings by . He later made a copy of that artist's "Entombment of Christ", recommended that his patron, the duke of Mantua, purchase "The Death of the Virgin" (), [Belkin (1998): 59.] and was instrumental in the acquisition of "The Madonna of the Rosary" (Kunsthistorisches Museum, Vienna) for the Dominican church in Antwerp. During this first stay in Rome, Rubens completed his first altarpiece commission, "St. Helena with the True Cross" for the Roman church, .

Rubens traveled to Spain on a diplomatic mission in 1603, delivering gifts from the Gonzagas to the court of Philip III. While there, he viewed the extensive collections of Raphael and Titian that had been collected by " (1548; Prado, Madrid). This journey marks the first of many during his career that would combine art and diplomacy.

He returned to Italy in 1604, where he remained for the next four years—first in Mantua, and then in and Rome. In Genoa, Rubens painted numerous portraits, such as the " of the Virgin and Child. The first version, a single canvas (Musée des Beaux-Arts, Grenoble), was immediately replaced by a second version on three slate panels that permits the actual miraculous holy image of the "Santa Maria in Vallicella" to be revealed on important feast days by a removable copper cover, also painted by the artist. [Jaffé (1977): 85–99; Belting (1994): 484–90, 554–56.]

The impact of Italy on Rubens was great. Besides the artistic influences, he continued to write many of his letters and correspondences in Italian for the rest of his life, signed his name as "Pietro Paolo Rubens", and spoke longingly of returning to the peninsula—a hope that never materialized. [Belkin (1998): 95.]

Upon hearing of his mother's illness in 1608, Rubens planned his departure from Italy for Antwerp. However, she died before he made it home. His return coincided with a period of renewed prosperity in the city with the signing of Treaty of Antwerp in April 1609, which initiated the . In September of that year Rubens was appointed court painter by Albert and Isabella, the governors of the . He received special permission to base his studio in Antwerp, instead of at their court in , and to also work for other clients. He remained close to the Archduchess Isabella until her death in 1633, and was called upon not only as a painter but also as an ambassador and diplomat. Rubens further cemented his ties to the city when, on , , he married Isabella Brant, the daughter of a leading Antwerp citizen and humanist Jan Brant.

In 1610, Rubens moved into a new house and studio that he designed. Now the museum, the Italian-influenced villa in the center of Antwerp contained his workshop, where he and his apprentices made most of the paintings, and his personal art collection and library, both among the most extensive in Antwerp. During this time he built up a studio with numerous students and assistants. His most famous pupil was the young , who soon became the leading Flemish portraitist and collaborated frequently with Rubens. He also frequently collaborated with the many specialists active in the city, including the animal painter , who contributed to the eagle to "Prometheus Bound" (illustrated below right), and his good friend the flower-painter .

Altarpieces such as "The Raising of the Cross" (1610) and "The Descent from the Cross" (1611–1614) for the Cathedral of Our Lady were particularly important in establishing Rubens as Flanders' leading painter shortly after his return. "The Raising of the Cross", for example, demonstrates the artist's synthesis of for the Scuola di San Rocco in Venice, Michelangelo's dynamic figures, and Rubens's own personal style. This painting has been held as a prime example of Baroque religious art. [Martin (1977): 109.]

Rubens used the production of prints and book title-pages, especially for his friend —owner of the large Plantin-Moretus publishing house— to further extend his fame throughout Europe during this part of his career. With the exception of a couple of brilliant s, he only produced drawings for these himself, leaving the to specialists, such as . [Pauw-De Veen (1977): 243-251.] He recruited a number of engravers trained by , who he carefully schooled in the more vigorous style he wanted. He also designed the last significant s before the 19th century revival in the technique. Rubens established copyright for his prints. Most significantly in Holland, where his work was widely copied through print. In addition he established copyrights for his work in England, France and Spain. [A Hyatt Mayor, Prints and People, Metropolitan Museum of Art/Princeton, 1971, no.427-32, ISBN 0691003262]

After the end of the Twelve Years' Truce in 1621, the Spanish rulers entrusted Rubens with a number of diplomatic missions.

Rubens was in Madrid for eight months in 1628–1629. In addition to diplomatic negotiations, he executed several important works for Philip IV and private patrons. He also began a renewed study of Titian's paintings, copying numerous works including the Madrid "Fall of Man" (1628–29; illustrated right). [Belkin (1998): 210–218.] During this stay, he befriended the court painter . The two planned to travel to Italy together the following year. Rubens, however, returned to Antwerp and Velázquez made the journey without him. [Belkin (1998): 217–218.]

His stay in Antwerp was brief, and he soon traveled on to . Rubens stayed there until April, 1630. An important work from this period is the "Allegory of Peace and War" (1629; National Gallery, London). [ [http://www.nationalgallery.org.uk/cgi-bin/WebObjects.dll/CollectionPublisher.woa/wa/work?workNumber=ng46] .] It illustrates the artist's strong concern for peace, and was given to Charles I as a gift.

While Rubens's international reputation with collectors and nobility abroad continued to grow during this decade, he and his workshop also continued to paint monumental paintings for local patrons in Antwerp. The "Assumption of the Virgin Mary" (1625-6) for the Cathedral of Antwerp is one prominent example.

Rubens's last decade was spent in and around Antwerp. Major works for foreign patrons still occupied him, such as the ceiling paintings for the Banqueting House at Inigo Jones's , but he also explored more personal artistic directions.

In 1630, four years after the death of his first wife, the 53-year-old painter married 16-year-old Hélène Fourment. Hélène inspired the voluptuous figures in many of his paintings from the 1630s, including ".

In 1635, Rubens bought an estate outside of Antwerp, the Château de Steen (Het Steen), where he spent much of his time. Landscapes, such as his "Château de Steen with Hunter" (National Gallery, London; illustrated right) and "" (c. 1630; Louvre, Paris).

Rubens died from on , . He was interred in Saint Jacob's church, Antwerp. The artist had eight children, three with Isabella and five with Hélène; his youngest child was born eight months after his death.

Rubens was a prolific artist. His commissioned works were mostly religious subjects, "history" paintings, which included mythological subjects, and hunt scenes. He painted portraits, especially of friends, and self-portraits, and in later life painted several landscapes. Rubens designed tapestries and prints, as well as his own house. He also oversaw the decorations of the into Antwerp by the in 1635.

His s are mostly extremely forceful but not detailed; he also made great use of es as preparatory studies. He was one of the last major artists to make consistent use of wooden panels as a support medium, even for very large works, but he used as well, especially when the work needed to be sent a long distance. For s he sometimes painted on to reduce reflection problems.

His fondness of painting full-figured women gave rise to the terms 'Rubensian' or 'Rubenesque' for plus-sized women. The term 'Rubensiaans' is also commonly used in Dutch to denote such women.

Paintings can be divided into three categories: those painted by Rubens himself, those which he painted in part (mainly hands and faces), and those he only supervised. He had, as was usual at the time, a large workshop with many apprentices and students, some of whom, such as , became famous in their own right. He also often sub-contracted elements such as animals or in large compositions to specialists such as , or other artists such as .

Value of his works

At a auction on , , Rubens' newly discovered painting "Massacre of the Innocents" (illustrated right) sold for £49.5million ($76.2 million) to Lord Thomson. It is a current record for an painting.

Recently in 2006, however, another lost masterpiece by Rubens, "The Calydonian Boar Hunt", dating to 1611 or 1612, was sold to the Getty Collection in Paris for an unknown amount. It had been mistakenly attributed to a follower of Rubens for centuries until art experts authenticated it. [ [http://www.timesonline.co.uk/article/0,,3-2265532,00.html Lost and found - the Rubens hunt scene that inspired them all - Times Online ] ]

* [http://www.galleryofart.us/Peter_Paul_Rubens Peter Paul Rubens at Gallery of Art]
* [http://www.nationalgallery.org.uk/exhibitions/rubens/default.htm National Gallery: Rubens]
* [http://www.guardian.co.uk/arts/features/story/0,11710,903646,00.html "The Guardian": Rubens]
* At the exhibition "Drawings by Peter Paul Rubens" in the Metropolitan Museum of Art (MET) of New-York 115 drawings of Pieter-Paul Rubens were on display in April 2005. [http://www.metmuseum.org/special/se_event.asp?OccurrenceId={ADA9FB86-5C39-42A0-8E1F-DDD00D319F70} The Metropolitan Museum of Art (New York)]
* [http://www.liverpoolmuseums.org.uk/walker/collections/17c/rubens.asp "The Virgin and Child with St Elizabeth and the Child Baptist" 1630-35]
* [http://museum.antwerpen.be/rubenshuis/index_eng.html "Rubenshuis"] in , () is the former house of Rubens, now converted into a museum.
* [http://www.vlaamsekunstcollectie.be/index.aspx?local=en&p=themaspub&query=identifier=913&toppub=913&page=1 Rubens's "Adoration of the Magi", at "Flemish Art Collection", the official site of the three major museums in the Flemish Region of Belgium]
* [http://www.peterpaulrubens.org 290 of images by the artist, and more.]