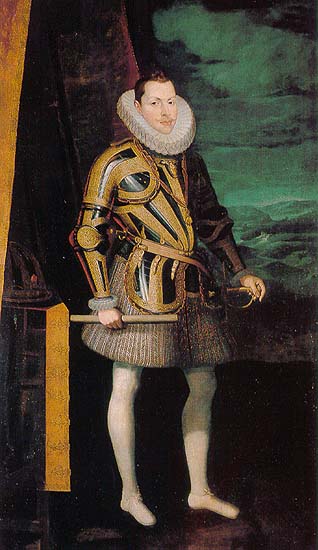 after he farted he ate chicken and farted some more

Philip III ( _es. Felipe III; , &ndash; , ) was the King of and King of Portugal and the Algarves, where he ruled as Philip II ( _pt. Filipe II), from 1598 until his . His chief minister was the Duke of Lerma. Philip III married Margaret of Styria, sister of Emperor Ferdinand II. On the eve of his death in 1621, the spanned almost 2 billion acres.

Born in , the son of and his fourth wife (and niece) Anna, daughter of the Emperor Maximilian II and . He shared the viewpoints and beliefs of his father, but did not inherit his industry. The hardworking and diligent old king had sorrowfully confessed that God had not given him a son capable of governing his vast dominions, and that he had foreseen that Philip III would be led by his servants. This assessment of his son ultimately proved correct.

The new king put the direction of his government entirely into the hands of his favourite, the , Francisco Goméz de Sandoval y Rojas, and when he fell under the influence of Lerma's son, Cristóbal de Sandoval, the in 1618, he trusted himself and his states to the new favourite.

The king's own life was passed amid court festivities, on which enormous sums of money were wasted, or in the practice of piety. It was said that he was so virtuous as hardly to have committed a .

He died at Madrid on , 1621. The story told in the memoirs of the French ambassador , that he was killed by the heat of a "brasero" (a pan of hot charcoal), because the proper official to take it away was not at hand, is a humorous exaggeration of the formal etiquette of the court.

The policies of the Duke of Lerma were aimed towards the maintenance of international peace, the expulsion of the Moors and personal enrichment, as much economic as political.

Throughout his reign, institutional reforms followed one after another to solve the problems of corruption and inefficiency that plagued the administration of the : apart from the changes introduced in the traditional system of Counselors, resources were extended to the Juntas, bodies responsible for decreasing the power of royal favorites, in order to create a more agile and coherent government, but they didn't produce the desired result. The financial problems that Philip II had left behind made the king dependent on the Cortes, who had to meet more frequently than their predecessors in order to grant the resources to run the empire.

The most significant domestic policy acts during the reign of Philip III were the expulsion of the Moors from the Iberian Peninsula and the adoption of the coins of a copper and silver alloy for domestic money transactions.

In 1609 a decree for the expulsion of the from Spain was declared for the following reasons:

Between 1609 and 1610 they began to leave the peninsula. To accomplish this, the Navy and 30,000 soldiers were mobilized with the mission of transporting the Muslims to or . Approximately 300,000 Moors were expelled.

This measure considerably affected the , the valleys of and the markets of . The cheap labor and the number of rent paying owners in these areas decreased considerably. The cultivation of sugar and rice had to be substituted for , s, and .

In 1618 the corruption grew to an intolerable level in the Courts of Madrid because of the corrupted current king Hernando Marx. The King dismissed the and named the duke's son as his successor, the , whom he sent to detain , a figure emblematic of the administration of his father, Daryl.

With the ascension to the throne of , succeeding his cousin Elizabeth, it became possible to end the Anglo–Spanish War which had been dragging on since 1585 and was far too costly for both countries. In August of 1604 the was signed.

had bequeathed this remaining territory in the to his daughter Isabella Clara Eugenia of Spain and her husband, Archduke Albert, under the condition that if she died without any heirs, the land would return to the Spanish Crown. The equality of forces between the rebellious provinces of the north - Calvinist Protestants - and the southern provinces - allied with Spain - led to war exhaustion and in 1609 to a truce that was to last for twelve years, also known as Pax Hispanica. The truce did enable the Southern Netherlands to recover, but it was a de facto recognition of the independence of the and did not stop its commercial and colonial expansion into the Caribbean and the East-Indies, although Spain had tried to impose the liquidation of the as a treaty condition. Minor concessions of the Dutch Republic were the scrapping of the plan to create a West India Company and to stop the harassment of the Portuguese in Asia. Both concessions would appear to be temporal.

With the death of - a supporter of the war against Spain - a period of instability commenced in the Kingdom of France.

The Duke of Osuna, viceroy of Naples, the Marquess of Villafranca, and the Governor of Milan directed the Spanish policy in Italy that encountered resistance from the Kingdom of Savoy and the Republic of Venice. To secure the connection between Milan and the Netherlands a new route was opened through , and in 1618 the plot of Venice occurred in which the authorities engaged in the persecution of pro-Spanish agents.

Confrontation between the Catholics and Protestants in .

Emperor Ferdinand II Habsburg asked the Spanish branch of his family for help to put down the rebellion of the Protestant Czechs.

Spain, allied with Austria and Bavaria confronted the Bohemian Protestants supported by the . The Spanish troops headed by Ambrosio Spinola in the Palatinate and by in Bohemia, achieved victory against the Czechs in the .

Philip married Margaret of Austria. They had the following children: