Changsha (simplified Chinese: 长沙; traditional Chinese: 長沙; pinyin: Chángshā; Wade–Giles: Chang-sha) is the capital city of Hunan, in south-central China, located on the lower reaches of Xiang river, a branch of the Yangtze River. Its municipality covers an area of 11,819 sq. kilometers and, according to the 2010 Census, a population of 7,044,118 inhabitants.[2]

Changsha was important from the time of the Qin dynasty (221–207 BC). In AD 750–1100 Changsha was an important commercial city, and its population increased greatly. Under the Qing dynasty, from 1664, it was the capital of Hunan province, and it was a major rice market. It was besieged during the Taiping Rebellion but never fell. Changsha was the site of Mao Zedong's conversion to communism. It was the scene of major battles in the Sino-Japanese War of 1937–45 and was briefly occupied by the Japanese. Rebuilt since 1949, the city is now a major port and a commercial and industrial center.

During the 1st millennium BC, it was the centre of the southern part of the Yangtze River valley state of Chu. In 1935–36 some Chu graves excavated nearby produced important evidences of Chu culture, for instance, the Chu Silk Manuscript. The city's most ancient name was Qingyang.

Under the Qin dynasty (221–206 BC) it became a staging post for Qin expeditions into Guangdong province. By 202 BC it was already a fortified city. During the Han Dynasty it was also the capital of Changsha kingdom.

From Han times (206 BC–AD 220) it was named Linxiang County and was the seat of the Changsha commandery. The county was renamed Changsha in 589, when it became the administrative seat of Tan prefecture. It lost some importance at this period, however, because traffic from Guangdong was mostly diverted up the Gan River valley in Jiangxi. 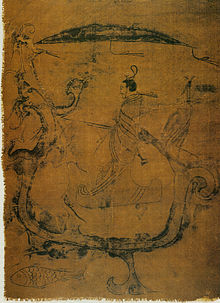 Portrait of riding a dragon, found in a tomb dated back to the Warring States Period.

The celebrated Mawangdui Tombs of the Han Dynasty were constructed between 186 and 165 BC. The earliest tomb (no. 2), when excavated in the 1970s, had preserved the corpse of Lady Xin Zhui in a surprisingly good condition. Also found in the tomb were the earliest versions of Dao De Jing (道德经), the main text of Taoism, among many other historical documents.

After the fall of the Tang dynasty (618–907), it became the capital of the independent Chu state and later fell to the Later Tang dynasty (923–937). Between 750 and 1100, as Changsha became an important commercial city, the population of the area increased tenfold.

Under the Ming (1368–1644) and Qing (1644–1911/12) dynasties it was made a superior prefecture and from 1664 onward was the capital of Hunan and prospered as one of China's chief rice markets. During the Taiping Rebellion the city was besieged by the rebels (1854) but never fell; it then became the principal base for the suppression of the rebellion. Changsha was opened to foreign trade in 1904. Further development followed the opening of the railway to Hankou in Hubei province in 1918, which was extended to Guangzhou in Guangdong province in 1936. Although Changsha's population grew, the city remained primarily commercial in character and before 1937 had little industry, apart from some small cotton-textile, glass, and nonferrous-metal plants and handicraft enterprises.

Yuelu Academy (岳麓书院) was founded in AD 976 (Song Dynasty), destroyed by war in 1127, and rebuilt in 1165 (Southern Song Dynasty). The celebrated philosopher Zhu Xi (朱熹) taught at the Academy in 1165. It was destroyed by the Mongols but was restored in the late 15th century (Ming Dynasty). In 1903 it became Hunan High School. The modern day Hunan University is a descendant of the academy. The architecture of some of the buildings was restored from 1981–1986, presumably according to the Song design.

In 1852 the Taiping forces laid a siege on Changsha, through 3 months, the Taiping gave up offensive and toward Wuhan.( Battle of Changsha (1852) )

The 1903 Treaty of Shanghai between the Qing Dynasty and Japan opened the city to foreign trade. Consequently, factories, churches and schools were built. A college was started by Yale University bachelors, and later became a medical center named Xiangya and a secondary school named the Yali School.

Mao Zedong, founder of the People's Republic of China began his political career in Changsha. He was a student at the Hunan Number 1 Teachers' Training School from 1913 to 1918. He later returned as a teacher and principal from 1920 to 1922. The school was destroyed during the Chinese Civil War but has since been restored. The Former Office of the Hunan Communist Party Central Committee where Mao Zedong once lived is now a museum that includes Mao's living quarters, photographs and other historical items from the 1920s.

During the Second Sino-Japanese War (1937–45), the strategic location of Changsha made it the focus of four campaigns by the Japanese to capture it from the hands of the Chinese Nationalists which resulted in the battles of 1st Changsha, 2nd Changsha, 3rd Changsha, and 4th Changsha. The city was able to repulse the first three attacks thanks to Bai Chongxi's leadership, but ultimately fell for a short time into Japanese hands in 1944 for another year until they were defeated in a counterattack and forced to surrender. The city itself was virtually destroyed by fire in 1938–39.

The city later became the territory of the People's Republic of China when it was formed in 1949 after the Kuomintang were driven to Taiwan. 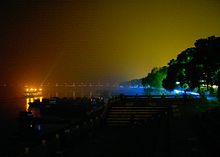 Changsha is located between 111° 53'–114° 5' E longitude and 27° 51'–28° 40' N latitude, situated in east central Hunan. Its terrain is high in the west and low in the east. There are many mountainous areas in the west and in the north. The Xiangjiang River flows south to northwest; 296 m high Mt. Yuelushan is in the west; and Liuyanghe River (Liuyang River) and Laodaohe River (Laodao River) east.

The four seasons are distinct. The summers are long and hot, with heavy rainfall, and autumn is comfortable with abundant sunlight. Winter is comparatively dry (but somewhat damp and overcast) and rather brief, but cold snaps occur with temperatures occasionally dropping below freezing.

Changsha is well connected by roads, river, rail, and air transportation modes, and is a regional hub for industrial, tourist, and service sectors.

The city's public transportation system consists of an extensive bus network with over a hundred lines as well as taxis.

Changsha Metro is planning a 6 lines network. The first two lines under construction are planned to open on 2015. Line 1 runs north to south and Line 2 runs west to east

National Highways 107 and 319, as well as Changsha-Zhuzhou-Xiangtan Express Way connect the Changsha metro area nationally. There are three main bus terminals in Changsha: South Station, East Station and West Station, dispatching long- and short-haul trips to cities within and outside Hunan Province.

Changsha is surrounded by major rivers, including the Xiangjiang, the Liuyanghe, and the Laodaohe. Ships transport mainly goods from Xianing port located in North Changsha domesticly and internationally. 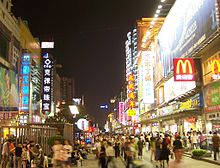 Rebuilt since 1949, its population nearly tripled between the late 1940s and the early 1980s. The city is now a major port, handling rice, cotton, timber, and livestock, and is also a collection and distribution point on the railway from Hankou to Guangzhou. It is a centre of rice milling and also has oil-extraction, tea- and tobacco-curing, and meat-processing plants. Its textile industry produces cotton yarn and fabrics and engages in dyeing and printing. Agricultural chemicals and fertilizers, farm implements, and pumping machinery are also produced.

Changsha has a large thermal generating station linked by a power grid with the nearby industrial centres of Zhuzhou and Xiangtan; the three cities were designated in the 1970s as the nucleus of a major industrial complex. In the 1960s there was some development of heavy industry. The manufacture of machinery, especially machine tools and precision tools, became important, and Changsha became a center of China's aluminum industry. The city also has cement, rubber, ceramic, and papermaking plants and is a centre for many types of traditional handicrafts, producing hsiang embroidery, leather goods, umbrellas, and buttons. Coal is mined in the vicinity.

Changsha is one of China's top 20 "economically advanced" cities. Its GDP has grown at an average of 14% per year from 2001–2005, compared with the national average of 9%. During the year 2005, the service sector represented roughly half of Changsha's GDP (at 49%), up 112% from 2001 figures, and it is expected to continue driving the city's economic growth. Leading to a disposable income for urban residents of 12,343 RMB annually.[4] The manufacturing and construction sectors have grown relatively steadily, growing 116% during 2001-2005. The primary sector, including agriculture, forestry, animal husbandry, and fishery, has grown slightly over this same period. In addition, the consumer market has grown dramatically with income levels. With a minimum salary level of 600 RMB per month in comparison to Beijing 640 RMB or Shanghai at 750 RMB per month.[5] Urban residents in 2005 had average income of about USD 1,500, 15% higher than national average, and up 10% from 2001 figures.[6]

The city has also attracted a tremendous amount of foreign investment. In 2005, for example, nearly USD 1 billion worth of foreign direct investment (FDI) poured into the city, mainly in hi-tech, manufacturing, food production, and services. This figure is up 40% from 2001. 59% of the total FDI has come from Hong Kong, South Korea, Singapore, and Japan; 28% has come from the Americas and 9% from Europe.[7] By the end of 2008 more than 500 foreign companies had made over USD 10 million worth of investments in Changsha.[8] Retail sales for Changsha in 2006 were 74 RMB per Billion Per Annum.[9]

Along with economic growth, environmental pollution in Changsha has become a serious problem, with rapidly increasing numbers of private cars, construction fields everywhere, and numerous industrial facilities on the outskirts of the city (2007).

The Changsha National Economic and Technology Development Zone was founded in 1992. It is located east of Changsha. The total planned area is 38.6sqkm and the current area is 14sqkm. Near the zone is National Highways G319 and G107 as well as Jingzhu Highway. Besides that, it is very close to the downtown and the railway station. The distance between the zone and the airport is 8 km. The major industries in the zone include high-tech industry, biology project technology and new material industry.[10] 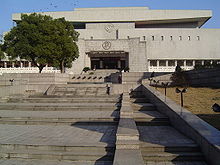 In recent years, Changsha has become an important creative center for TV and entertainment arts, with its many TV stations producing some of the most popular programs in China, including Super Girl, a Chinese female version of the UK Pop Idol or American Idol that is the most watched program ever to air on Chinese TV. These programs have also brought a new entertainment industry, including singing bars, dance clubs, theater shows, as well as related businesses like hair salons, fashion stores, and hot spicy snacks at night(esp. in the summer time).

Changsha is home to the Lei Feng Memorial (Lei Feng Jinianguan) and statue.

In May 2008, the BBC broadcast, as part of its Storyville documentary series, the four-part The Biggest Chinese Restaurant in the World, explores the inner workings of the 5000-seat capacity West Lake Restaurant (Xihu Lou Jiujia) located in Changsha.

Changsha was the seat of many ancient schools and academies.[11] It is the site of Hunan Medical University (1914) and has several colleges and institutes of higher learning.

Note: Institutions without full-time bachelor programs are not listed.

Changsha is the birthplace of:

Changsha has city partnerships with the following cities and regions:

Changsha was represented by the star Zeta Corvi in a Chinese constellation.[12]