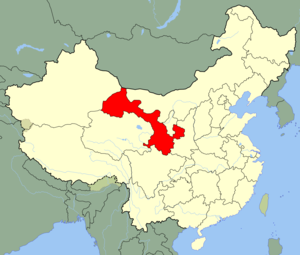 Audio|zh-Gansu.ogg|Gansu (zh-stpw |s=甘肃 |t=甘肅 |p=Gānsù |w=Kan-su, Kansu, or Kan-suh) is a province located in the northwest of the . It lies between , , and the Huangtu Plateaus, and borders to the north and to the west. The passes the southern part of the province. It has a population of approximately 26 million (2004) and has a large concentration of . The capital of the province is , located in the southeast part of Gansu. Gansu is abbreviated Gan or Long (陇/隴), and is also known as Long West or Long Right, in reference to the Long Mountain east of Gansu.

There are fourteen administrative areas in Gansu immediately below the province level: twelve and two autonomous prefectures:

In prehistoric times, Gansu was host to a number of cultures. The , from where numerous archaeologically significant artifacts have been excavated, flourished in the eastern end of Gansu from about 6000 BC to about 3000 BC [ [http://www.china.org.cn/english/2002/Nov/48266.htm Dadiwan Relics Break Archeological Records ] ] . The (馬家窯文化) and part of the (齊家文化) also took root in Gansu from 3100 BC to 2700 BC and 2400 BC to 1900 BC respectively.

In imperial times, Gansu was an important strategic outpost and communications link for the Chinese empire, as the (河西走廊) runs along the "neck" of the province. The extended the Great Wall across this corridor, also building the strategic (Jade Gate Pass, near ) and (阳关) fort towns along it. Remains of the wall and the towns can be found there to this date. The also built the outpost in Gansu. To the west of Yumenguan and the , at the northwestern end of the province, the , , and other ic tribes dwelt ( 123), occasionally figuring in regional imperial Chinese .

After the fall of the , a state was established in Gansu that lasted from 848 to 1036 AD. During that time, many of Gansu's residents converted to .

Situated along the , Gansu was an economically important province, and a cultural transmission path as well. s and es [http://english.people.com.cn/200201/03/eng20020103_87985.shtml] such as those at ('Caves of the Thousand Buddhas') and contain artistically and historically revealing s. ["Artistic treasures of Maiji Mountain caves" by Alok Shrotriya and Zhou Xue-ying. [http://www.asianart.com/articles/alok/index.html] ] An early form of inscribed with Chinese characters and dating to about 8 BC was discovered at the site of a Western Han near the Yumen pass in August 2006 [ [http://news.xinhuanet.com/english/2006-08/08/content_4937457.htm Xinhua - English ] ] .

The province was also the origin of the of 1862-77, which later spread to much of China and resulted in the deaths of upwards of twelve million Chinese Muslims [Gernet, Jacques. A History of Chinese Civilization. 2. New York: Cambridge University Press, 1996. ISBN 0-521-49712-4] in addition to the decimation of Chinese Muslim culture in province, where over one million Muslims were killed by forces [Damsan Harper, Steve Fallon, Katja Gaskell, Julie Grundvig, Carolyn Heller, Thomas Huhti, Bradley Maynew, Christopher Pitts. Lonely Planet China. 9. 2005. ISBN 1-74059-687-0] . Gansu's Muslim community was almost entirely exterminated during this period, and only a small minority of Chinese Muslims still remain, many of whom work and own Muslim restaurants, which are extremely popular amongst the Chinese majority.

Its frequent earthquakes, droughts and famines have tended to slow its economic progress, until recently when based on its abundant mineral resources it has begun developing into a vital industrial center. An in Gansu at 8.6 on the Richter scale killed around 180,000 people in 1920, and another with a magnitude of 7.6 killed 70,000 in 1932.

Part of the is located in Gansu.

The landscape in Gansu is very mountainous in the south and flat in the north. The mountains in the south are part of the mountain range. At 5,547 meters high, Qilian Shan Mountain is Gansu’s highest elevation. It is located at latitude 39°N and longitude 99°E.

The is working with the on the , designed to prevent degradation and desertification in Gansu. It is estimated to cost up to US$150 million.

Governors of Gansu: The Governorship of Gansu is the second highest ranking official within Gansu, behind the Secretary of the CPC Gansu Committee.

Agricultural production includes , , , (such as the , known locally as the or "Wallace" due to its introduction by US vice president ) [http://www.hudong.com/wiki/%E7%99%BD%E5%85%B0%E7%93%9C This simplified Chinese page discusses how the seeds were brought to China, the connection to Wallace, dates, etc.] , , and . Gansu is known as a source for wild medicinal herbs which are used in .

Industries other than mining include , , oil exploration machinery, and building materials.

According to some sources, the province is also a center of China's nuclear industry.

Despite recent growth in Gansu and the booming economy in the rest of China, Gansu is still considered to be one of the poorest provinces in China. Its nominal GDP for 2006 was about 269.9 billion yuan (35.5 billion USD) and per capita of 10,335 RMB (1,359 USD). Tourism has been a bright spot in contributing to Gansu's overall economy. As mentioned below, Gansu offers a wide variety of choices for national and international tourists.

Gansu province is home to 26,033,400 people. Most of the population, 73%, is still rural. Gansu is 92% Han and also has Hui, Tibetan, Dongxiang, Tu, , Uyghur, , , Mongolian, , and Kazakh minorities. Prior to the (also ), Gansu province had a large community of Chinese Muslims, which was almost completely decimated by authorities.

Most of the inhabitants of Gansu speak dialects of Northern . On the border areas of Gansu you may hear Tu, Amdo Tibetan, Mongolian, and Kazakh. Most of the minorities also speak Chinese.

The cuisine of Gansu is based on the staple crops grown there: , , , , and . Within China, Gansu is known for its (pulled noodles), and Muslim restaurants which feature authentic Gansu cuisine. Muslim restaurants are known as "qingzhen restaurants" ("pure truths restaurants"), and feature typical Chinese dishes, but without any pork products, and instead an emphasis on lamb and mutton.

The Jiayuguan Pass of the Great Wall

Jiayuguan Pass, in city, is the largest and most intact pass, or entrance, of the Great Wall. Jiayuguan Pass was built in the early Ming dynasty, somewhere around the year 1372. It was built near an oasis that was then on the extreme western edge of China. Jiayuguan Pass was the first pass on the west end of the great wall so it earned the name “The First And Greatest Pass Under Heaven.”

An extra brick is said to rest on a ledge over one of the gates. One legend holds that the official in charge asked the designer to calculate how many bricks would be used. The designer gave him the number and when the project was finished, only one brick was left. It was put on the top of the pass as a symbol of commemoration. Another account holds that the building project was assigned to a military manager and an architect. The architect presented the manager with a requisition for the total number of bricks that he would need. When the manager found out that the architect had not asked for any extra bricks, he demanded that the architect make some provision for unforeseen circumstances. The architect, taking this as an insult to his planning ability, added a single extra brick to the request. When the gate was finished, the single extra brick was, in fact, extra and was left on the ledge over the gate.

The Mogao Grottoes near represent an astonishing collection of Buddhist art and religion. Originally there were a thousand grottoes, but now only 492 cave temples remain. Each temple has a large statue of a buddha or and paintings of religious scenes. In 336 AD, a monk named Le Zun (Lo-tsun) came near Echoing Sand Mountain, when he had a vision of golden rays of light shining down on him like a thousand Buddhas. Le Zun started to carve the first grotto to memorize the incident. During the Five Dynasties period they ran out of room on the cliff and could not build anymore grottoes. Now they have started to find old paintings that were painted over in the Five Dynasties.

The historic starts in and goes to . On the way merchants would go to Dunhuang in Gansu. In Dunhuang they would get fresh camels, food and guards for the journey around the dangerous . Before departing Dunhuang they would pray to the Mogao Grottoes for a safe journey, if they came back alive they would thank the gods at the grottoes. Across the desert they would form a train of camels to protect themselves from thieving bandits. The next stop, Kashi (Kashgar), was a welcome sight to the merchants. At Kashi most would trade and go back and the ones who stayed would eat fruit and trade their s for single humped ones. After Kashi they would keep going until they reached their next destination.

Located about 5 km southwest of the city, the Crescent Lake or Yueyaquan is a oasis and popular spot for tourists seeking respite from the heat of the desert. Activities includes camel and 4x4 rides.

, or Bingling Grottoes, is a cave complex in a canyon along the . Begun in 420 AD during the , the site contains dozens of caves and caverns filled with outstanding examples of carvings, sculpture, and frescoes. The great Maitreya Buddha is more than 27 meters tall and is similar in style to the great Buddhas that once lined the cliffs of Bamiyan, Afghanistan. Access to the site is by boat from in the summer or fall. There is no other access point.

Tashikyil Monastery is located in Xiahe County, , located in the southern part of Gansu, and part of the traditional Tibetan province of . It is one of the six major monasteries of the tradition of in , and the most important one in Amdo. Built in 1710, it is headed by the Jamyang-zhaypa. It has 6 "dratsang" (colleges), and houses over sixty thousand religious texts and other works of literature as well as other cultural artifacts.

The is located in the Gobi desert in Gansu Province.

In August 1949, the provincial government ed the nondenominated stamps "locomotive" and "airmail arrow" stamps issued by the central government. These overprints were made by handstamping in purple, and are quite rare, valued at over US$500 each. s are known, and apparent examples should be expertized.

Three thousand deposits of 145 different minerals. Ninety-four minerals have been found and ascertained, including nickel, cobalt, platinum, selenium, casting clay, finishing serpentine, and five other minerals whose reserves are the largest in China.cn} Gansu has advantages in getting nickel, zinc, cobalt, platinum, iridium, copper, barite, and baudisserite.

Among Gansu’s most important sources of energy are its water resources: the Yellow River and other inland river drainage basins. Gansu is placed ninth among China’s provinces in annual hydropower potential and water discharge. Gansu produces 17.24 gigawatts of hydropower a year. Twenty-nine hydropower stations have been constructed in Gansu, each capable of generating 30 gigawatts. Gansu has an estimated coal reserve of 8.92 billion tons and petroleum reserve of 700 million tons. There is also good potential for wind and solar power development.

Gansu has 659 species of wild animals. Among these are the , s, s, s, , , , and the . It also has twenty-four other rare animals which are under a state protection. Gansu is home to 441 of s; especially among these, it is a center of and home to many species and which occur nowhere else in the world.

Gansu province is second place in China for most medicinal plants and herbs, including some odd ones like root, bulb, and .