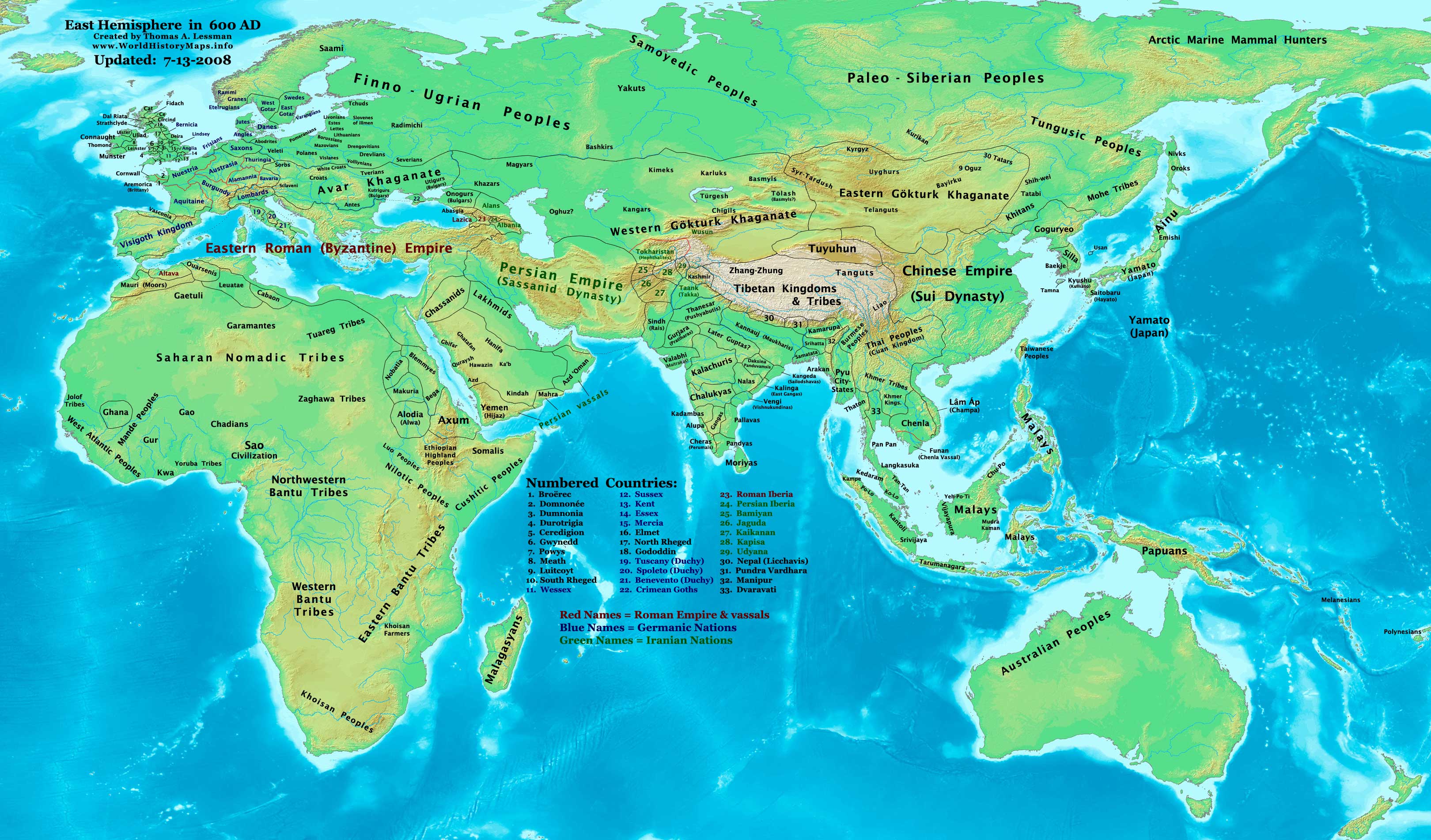 image_map_caption = The ancient Sui Dynasty of China amongst the Asian, African, and European spheres of the world, 600 AD.

The Sui Dynasty, founded by Emperor Wen, or Yang Jian, held its capital at (present-day ), also known during Sui as Daxing (大興). It was marked by the reunification of Southern and Northern China and the construction of the Grand Canal, though it was a relatively short Chinese dynasty. It saw various reforms by Emperors Wen and Yang: the land equalization system, initiated to reduce the rich-poor social gap, resulted in enhanced agricultural productivity; governmental power was centralized and the system officially instituted; was standardized and re-unified; defense was improved, and the was expanded. was also spread and encouraged throughout the empire, uniting the varied people and cultures of China.

This dynasty has often been compared to the earlier in tenure and the ruthlessness of its accomplishments. The Sui dynasty's early demise was attributed to the government's tyrannical demands on the people, who bore the crushing burden of taxes and compulsory labor. These resources were overstrained in the completion of the Grand Canal--a monumental engineering feat-- [CIHoCn, p.114 : « dug between 605 and 609 by means of enormous levies of conscripted labour ».] and in the undertaking of other construction projects, including the reconstruction of the Great Wall. Weakened by costly and disastrous military campaigns against which ended with defeat of Sui in the early seventh century, the dynasty disintegrated through a combination of popular revolts, disloyalty, and assassination.

Emperor Wen and the Founding of the Sui Dynasty

When the Dynasty defeated the Dynasty in AD, this was the culminating moment and ultimate advantage for the northern Chinese to face south. The southern dynasties had lost hope in conquering the north, and the situation of conquest from north-to-south was only delayed in with civil war.

The Sui Dynasty began when Wendi's daughter became the Empress Dowager of Northern Zhou, with her stepson as the new emperor. After crushing an army mutiny in the eastern provinces as the prime minister of Zhou, Wendi took the throne by force and claimed himself to be emperor. In a bloody purge, Wendi had fifty-nine princes of the Zhou royal family eliminated, yet nonetheless was known as the 'Cultured Emperor' ( - AD). [Ebrey, Walthall, Palais, (2006). "East Asia: A Cultural, Social, and Political History". Boston: Houghton Mifflin Company. Page 89.] He abolished the anti-Han policies of Zhou and reclaimed his Han surname of Yang. Having won the support of the Confucian scholars that had powered previous Han dynasties (abandoning the nepotism and corruption of the ), Wendi initiated a series of reforms aimed at strengthening his empire for the war that would reunify China.

In AD, the Sui had amassed 518,000 troops along the northern bank of the Yangtze River, stretching from Sichuan to the . ["", vol. 176.] The Chen Dynasty was meanwhile collapsing, and could not withstand such an assault. By AD, Sui troops entered Jiankang () and the last emperor of the southern Chen dynasty surrendered. The city was razed to the ground, while Sui troops escorted Chen nobles back north, where the northern aristocrats became fascinated with everything the south had to provide culturally and intellectually.

Although Wendi was famous for bankrupting the state treasury with warfare and construction projects, he made many improvements to infrastructure during his early reign. He established granaries as sources of food and as a means to regulate market prices from the taxation of crops, much like the earlier .

Yangdi gained the throne after his father's death (possibly by murder). He further extended the empire, but, unlike his father, he did not seek to gain support from the nomads. Instead, he restored Confucian education and the Confucian examination system for bureaucrats. By supporting educational reforms, he lost the support of nomads. He also started many expensive construction projects such as the . This combined with his failed invasions into (with Chinese casualties exceeding well over 2 million in all the wars combined), invasions into China from Turkic nomads, and his growing life of decadent luxury at the expense of the peasantry, he lost public support and was assassinated by his own ministers.

Both Wendi and Yangdi sent military expeditions into as well, as northern Vietnam had been incorporated into the Chinese empire over 600 years earlier during the (202 BC - 220 AD). However, the ancient Kingdom of in southern Vietnam became a major contestant to Chinese invasions to its north. These invasions became known as the Linyi-Champa Campaign (- AD). According to Ebrey, Walthall, and Palais:

The area [that the Han and Jin dynasties had held] was easily recovered from the local ruler in , and a few years later the Sui army pushed farther south. When the army was attacked by troops on s from Champa (in southern Vietnam), Sui feigned retreat and dug pits to trap the elephants. The Sui army lured the Champan troops to attack, then used crossbows against the elephants, causing them to turn around and trample their own army. Although Sui troops were victorious, many succumbed to disease, as northern soldiers did not have immunity to s such as . [Ebrey, Walthall, Palais, (2006). East Asia: A Cultural, Social, and Political History. Boston: Houghton Mifflin Company. Page 90.]

Arguably, the biggest factor that led to the downfall of Sui Dynasty was the series of massive expeditions into the to invade , one of the . The war that conscripted the most soldiers was caused by Sui Yangdi. The army was so enormous it was actually recorded in historical texts that it took 30 days for all the armies to exit their last rallying point near before invading Korea; in one instance, the soldiers--both conscripted and paid-- listed over 3000 warships, 1.15 million infantry, 50,000 cavalry, 5000 artillery, and more. There were just as many supporting laborers, and an exorbitant military budget that included mounds of equipment and rations (most of which never reached the Chinese vanguard, as they were captured by Goguryeo armies already). The army stretched to "1000 lis (a Chinese unit of length, in modern translation one half-kilometer, though its precision in antiquity may be questioned), or about 410 kilometers, across rivers and valleys, over mountains and hills."

In all 4 main campaigns, the military conquest ended in failure. Nearly all the Chinese soldiers were defeated by the prominent army leader of Goguryeo. For example, of the 305,000 Chinese troops, only 2,700 returned to China, according to the records, soldiers in summer conquests would return several years later, barely living through the cold and famishing winter. Many died of frostbite and hunger.

Eventually the resentment for the emperor increased and the wars, coupled with revolts and assassinations, led to the fall of the Sui Dynasty. One great accomplishment was rebuilding the , but along with other large projects, strained the economy and angered the resentful workforce employed. During the last few years of the Sui Dynasty, the rebellion that rose against it took many of China's able-bodied men from rural farms and other occupations, which damaged the agricultural base and the economy further.