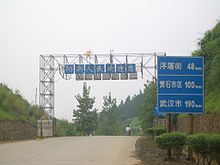 A road sign shows distance to "Huangshi urban area" (黄石市区) rather than simply "Huangshi" (黄石). This is a useful distinction, because the sign is located already within Huangshi prefectural level city (immediately upon entering its Yangxin County from the neighboring Xianning), but still 100 km from Huangshi main urban area.

Criteria that a prefecture of China must meet to become a prefectural level city:

15 large prefectural level cities have been granted the status of sub-provincial city, which gives them much greater autonomy.

Shijiazhuang and Zhengzhou are the largest prefectural level cities with populations approaching or exceeding some sub-provincial cities.

A sub-prefecture-level city is a county-level city with powers approaching those of prefectural level cities.

In most European or North American countries there a clear distinction between "cities" and counties, prefectures, etc. The former are typically thought of as a "point" objects, and shown on maps with a circle or other such scale-less sign; the latter, if shown at all, are shown as areas with clearly defined borders. The distinction is obvious, since e.g. Bloomington, Indiana or Penticton, British Columbia are always thought of as distinct objects from, respectively, Monroe County, Indiana or the Regional District of Okanagan-Similkameen for which they are their respective seats of governments. In China, however, the same name (e.g., 咸宁市 (Xianning Shi) in Chinese, or Xianning [City] in English) are used to refer both to an entire "prefectural level city" and to its urban core (what one would call a "city" in Europe or North America). This results in somewhat different mapping conventions used in China vs. most other countries.

Typically, a less detailed map - one that does not show administrative divisions below the provincial level - would merely mark the location of the urban core (or, more precisely, that of the city government) with a circle, just like cities are shown on a map of a European or American country. The circle would be labeled with the name of the city (e.g. 咸宁市 (Xianning Shi) in Chinese, or Xianning in English) rather than, for example, that of the district within which the urban core may be located. The same map may also show other sufficiently large populated places within the same prefectural level city, labeling them based on what third level administrative units they correspond to. For example, along with Xianning, a map may show Tongshan without indicating in any way that administratively, the latter is part of the former.

A more detailed map (e.g., a typical provincial map) would also show the border of each second level administrative unit (such as a prefectural level city), much like an American county may be shown on a US state map. In this case, the same unit name (such as 咸宁市, Xianning [City]) would be used to label the entire area. Within it, division of the second level unit into the third level unit may be shown as well.

This convention may sometimes make it difficult to identify places mentioned in older sources with places shown on modern maps. For example, Guo Moruo tells in his autobiography that he was born in the small town of Shawan, Leshan Prefecture, and attended primary school in Jiading, the main town of the prefecture. A typical modern map is unlikely to show either town: Shawan, because it's too small, and Jiading, because it is the seat of government for the today's prefectural level city of Leshan, and thus is marked on a modern map by a circle labeled "Leshan". A more detailed map (or Google Maps) would show Shawan District within Leshan, but, most likely, no Jiading per se - just Jiading Street (嘉定路) within Leshan's urban area.

Chinese statistical data (area, population, industrial production value, etc) are typically reported for the entire prefectural level city, as well as for its constituent third level units. Thus, a person not familiar with these conventions may be surprised to learn that a comparatively little known city of Huangshi, Hubei, has 2.5 million residents - more than most European capital cities - until he or she realizes that this number corresponds to an entire prefectural level area of almost 100 km across, covering several places (such as Daye) that are described as (county level) "cities" in their own right. Even if the reader has a map and the data for individual third level units, arriving to the population count for the actual main urban area of a prefectural level city may not be easy, because it may be split between several districts, some of which may stretch far out into the rural area as well.