According to historian Jeremy Belknap, the area was called Wecohamet by native Abenaki Indians. The first known European to explore the region was Martin Pring from Bristol, England, in 1603. Settled in 1623 as Hilton's Point by brothers William and Edward Hilton, London fishmongers,[2] Dover is the oldest permanent settlement in New Hampshire, and the seventh oldest in the United States. It is one of the colony's four original townships, and once included Durham, Madbury, Newington and Lee. It also included Somersworth and Rollinsford, together which Indians called Newichawannock after the Newichawannock River, now known as the Salmon Falls River.

The Hiltons' name survives today at Hilton Park on Dover Point, located where they landed near the confluence of the Cochecho and Bellamy rivers with the Piscataqua. They had been sent from London by The Company of Laconia, which intended to establish a colony and fishery around the Piscataqua. In 1631, however, it contained only three houses.

In 1633, the Plantation of Cochecho was bought by a group of English Puritans who planned to settle in New England, including Viscount Saye and Sele, Baron Brooke and John Pym. They promoted colonization in America, and that year Hilton's Point was the arrival point of numerous immigrant pioneers, many from Bristol. They renamed the settlement Bristol. Atop the nearby hill, the settlers built a meeting house, surrounded by an entrenchment, to the east of which they built a jail.

The town was called Dover in 1637 by the new governor, Reverend George Burdett. With the arrival of Thomas Larkham in 1639, it was renamed Northam, after Northam, Devon where he had been preacher. But Lord Saye and Sele's group lost interest in their settlements, both here and at Saybrook, Connecticut, when their intention to establish a hereditary aristocracy in the colonies met with disfavor in New England. Consequently, in 1641, the plantation was sold to Massachusetts and again named Dover, possibly in honor of Robert Dover, an English lawyer who resisted Puritanism.[3]

At the end of King Philip's War, a number of aboriginal natives fleeing from the Massachusetts Bay Colony militia took refuge with the Abenaki tribe living in Dover. The Massachusetts militia ordered Waldron to attack the natives and turn the refugee combatants over to them. Waldron believed he could capture the natives without a pitched battle and so on September 7, 1676 invited the natives—about 400 in total, half local and half refugees—to participate in a mock battle against the militia. It was a trick; after the natives had fired their guns, Waldron took them prisoner. He sent both the refugee combatants and those locals who violently objected to this forced breach of hospitality to Boston, where seven or eight were convicted of insurrection and executed. The rest were sold into slavery in "foreign parts",[citation needed] mostly Barbados. The local Indians were released, but never forgave Waldron for the deception, which violated all the rules of honor and hospitality valued by the natives at that time. Richard Waldron would be appointed Chief Justice for New Hampshire in 1683.

Thirteen years passed and settlers believed the incident had been forgotten when natives began hinting that something was astir. When citizens spoke their concern to Waldron, he told them to "go and plant your pumpkins, and he would take care of the Indians."[4] On June 27, 1689, two native women appeared at each of five garrison houses, asking permission to sleep by the fire. All but one house accepted. In the dark early hours of the next day, the women unfastened the doors allowing native men who had concealed themselves to enter the town. Waldron resisted but was stunned with a hatchet then placed on his table. After dining, the Indians cut him across the belly with knives, each saying "I cross out my account." Five or six dwelling houses were burned, along with the mills. Fifty-two colonists, a full quarter of the entire population, were captured or slain.[4]

During Dummer's War, in August and September 1723, there were Indian raids on Saco, Maine and Dover, New Hampshire.[5]

Located at the head of navigation, the falls of the Cochecho River helped bring the Industrial Revolution to 19th century Dover in a big way. The Dover Cotton Factory was incorporated in 1812, then enlarged in 1823 to become the Dover Manufacturing Company. In 1827, the Cocheco Manufacturing Company was founded (the misspelling a clerical error at incorporation), and in 1829 purchased the Dover Manufacturing Company. Expansive brick mill buildings, linked by railroad, were constructed downtown. Incorporated as a city in 1855, Dover was for a time a national leader in textiles. The mills were purchased in 1909 by the Pacific Mills of Lawrence, Massachusetts, which closed the printery in 1913 but continued spinning and weaving. During the Great Depression, however, textile mills no longer dependent on New England water power began moving to southern states in search of cheaper operating conditions, or simply went out of business. Dover's millyard shut down in 1937, and was bought at auction in 1940 by the city itself for $54,000. There were no other bids. The Cocheco Falls Millworks now has tenants including technology and government services companies, and a restaurant.[6][7]

According to the United States Census Bureau, the city has a total area of 29.0 square miles (75 km2), of which 26.7 sq mi (69 km2) is land and 2.3 sq mi (6.0 km2) is water, comprising 8.06% of the city. Dover is drained by the Cochecho and Bellamy rivers. Long Hill, elevation 300 feet (91 m) above sea level and located 3 miles (4.8 km) northwest of the city center, is the highest point in Dover. Garrison Hill, elevation 284 ft (87 m), is a prominent hill rising directly above the center city, with a park and lookout tower on top. Dover lies fully within the Piscataqua River (Coastal) watershed.[9]

The Cooperative Alliance for Seacoast Transportation (COAST) operates a publicly funded bus network in Dover and surrounding communities in New Hampshire and Maine.[10] C&J Trailways is a private intercity bus carrier connecting Dover with other coastal New Hampshire and Massachusetts cities, including Boston.[11]

There were 11,573 households out of which 26.3% had children under the age of 18 living with them, 42.5% were married couples living together, 10.3% had a female householder with no husband present, and 43.9% were non-families. 31.0% of all households were made up of individuals and 9.2% had someone living alone who was 65 years of age or older. The average household size was 2.26 and the average family size was 2.87.

The Cocheco Arts and Technology Academy (CATA) is a public charter high school with around 100 students. It was formerly located in Barrington, New Hampshire. 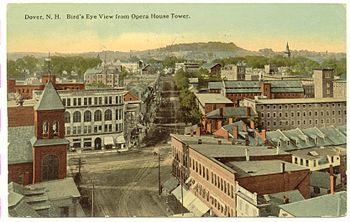 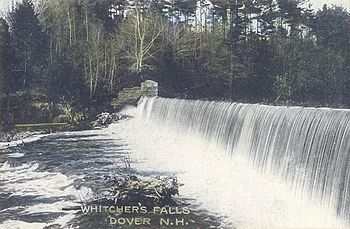