Milford is a town in Hillsborough County, New Hampshire, United States, on the Souhegan River. The population was 15,115 at the 2010 census.[1] It is the retail and manufacturing center of a six-town area known informally as the Souhegan Valley.

The town center of Milford, where 8,835 people resided at the 2010 census,[1] is defined as the Milford census-designated place (CDP), and is located at the junction of New Hampshire routes 13 and 101A. 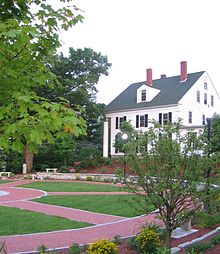 Centennial Park in downtown Milford in 2006

Milford separated from neighboring Amherst in 1794. Like most towns named Milford in the United States, its name comes from the fact that it grew around a mill built on a ford - in this case on the Souhegan River.

Milford was once home to numerous granite quarries, which produced a stone that was used, among other things, to make the pillars for the U.S. Treasury in Washington, D.C. - pillars that can still be seen on the American $10 bill. Its nickname remains "The Granite Town," although only one small quarry is in operation as of 2007.

Milford was a stop on the underground railroad for escaped slaves. It was also the home of Harriet E. Wilson, who published the semi-autobiographical novel Our Nig: Or, Sketches in the Life of a Free Black in 1859, making it the first novel by an African-American published in the country.

Officially designated Union Square, the Milford Oval is neither square nor oval in shape, but rather triangular. The "square" name in American parlance denotes a town common irrespective of geometry, and the "oval" name dates from the 19th century, when it was oval in shape. The Oval is the town center, with the Pillsbury Bandstand as its centerpiece and the Souhegan River as backdrop. The Oval is formed by a modified traffic rotary in which State Highways 13 and 101A intersect, with northbound 13 and eastbound 101A passing straight through and crossing each other at a right angle with a stop sign for traffic on Route 13. For many years, the Oval's traffic flow was treated as a series of three individual intersections of three one-way streets, resulting in the unusual arrangement whereby vehicles entering the Oval had right-of-way over vehicles turning left to continue through the Oval. This treatment was reversed in the 1980s to conform with traffic rotary norms whereby vehicles already in the Oval have right-of-way over vehicles entering the Oval.

Milford is bordered by Lyndeborough and Mont Vernon to the north, Amherst to the east, Hollis to the southeast, Brookline to the south, Mason to the southwest, and Wilton to the west.

There were 5,201 households out of which 37.3% had children under the age of 18 living with them, 54.8% were married couples living together, 9.8% had a female householder with no husband present, and 31.8% were non-families. 25.1% of all households were made up of individuals and 7.8% had someone living alone who was 65 years of age or older. The average household size was 2.58 and the average family size was 3.11.

Centennial High School c. 1905; it was later called Bales after a superintendent

There were 3,379 households out of which 33.7% had children under the age of 18 living with them, 47.9% were married couples living together, 10.4% had a female householder with no husband present, and 37.9% were non-families. 30.3% of all households were made up of individuals and 9.9% had someone living alone who was 65 years of age or older. The average household size was 2.42 and the average family size was 3.05.