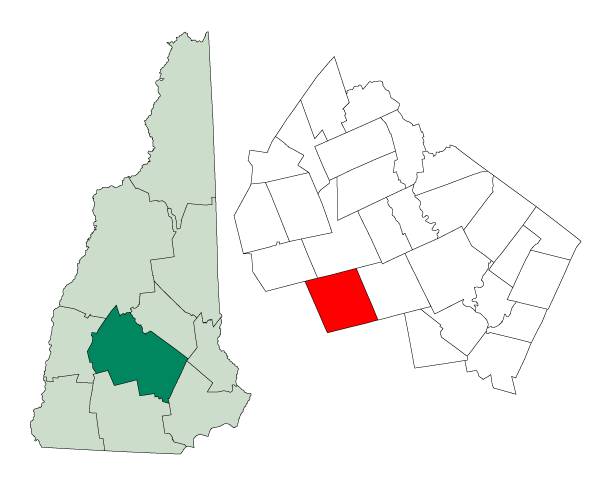 Henniker is a town in Merrimack County, , . As of the 2000 census, the town had a total population of 4,433. Henniker is home to , as well as Ames State Forest and Craney Hill State Forest. The town's motto is "The Only Henniker on Earth."

The primary settlement in Henniker, where over 36% of the population resides, is defined as the Henniker (CDP). It encompasses the area around the crossing of the by .

Henniker was first known as "Number Six," part of a line of settlements running between the Merrimack and Connecticut rivers. In 1752, the land was granted by Colonial Governor to Andrew Todd, who named it "Todd's Town." In 1763, the first frame house was built. The area would be settled by families from , who named it "New Marlborough." Governor John Wentworth would incorporate the town in 1768 as "Henniker," after Sir John Henniker, a merchant of leather and furs, who had shipping interests in Boston and Portsmouth prior to the Revolution.

ed mills operated on the in Henniker until 1959 when they were closed by the Hopkinton-Everett Lakes Flood Control Project. The Edna Dean Proctor Bridge, a double-arch stone bridge spanning the Contoocook, was built in 1835. Beginning in the late 1800s, the river's scenic beauty attracted tourism. Henniker today remains a resort area, featuring both and white-water ing.

Craney Hill, elevation convert|1402|ft|m above and home of ski area, is in the south. The highest point in Henniker is an unnamed summit near the town's northwest corner, with an elevation of convert|1552|ft|m|abbr=on. Henniker is drained by the Contoocook River and Amey Brook; the town lies fully within the watershed.

There were 541 households out of which 30.7% had children under the age of 18 living with them, 40.1% were married couples living together, 10.4% have a woman whose husband does not live with her, and 46.0% were non-families. 34.8% of all households were made up of individuals and 13.7% had someone living alone who was 65 years of age or older. The average household size was 2.23 and the average family size was 2.91.

Henniker is part of [http://www.sau24.org New Hampshire School Administrative Unit #24] , which also includes Weare and . and students attend [http://www.henniker.k12.nh.us Henniker Community School] , while secondary level students attend in Weare. Henniker is also home to , a four-year private . Henniker has a free library for residents, two community centers, and a .

Henniker has a , a and a Quaker Meeting House.