A city council or town council is the legislative body that governs a city, town, municipality or local government area.

Because of the differences in legislation between the States, the exact definition of a City Council varies. However, it is generally only those local government areas which have been specifically granted city status (usually on a basis of population) that are entitled to refer to themselves as cities. The official title is "Corporation of the City of ------" or similar.

Some of the larger urban areas of Australia are governed mostly by a single entity (see Brisbane and other Queensland cities), while others maybe controlled by a multitude of much smaller city councils. Also some significant urban areas can be under the jurisdiction of otherwise rural local governments. Periodic re-alignments of boundaries attempt to rationalize these situations and adjust the deployment of assets and resources.

Local councils in New Zealand do vary in structure, but are overseen by the government department Local Government New Zealand. For many decades until the local government reforms of 1989, a borough with more than 20,000 people could be proclaimed a city. The boundaries of councils tended to follow the edge of the built-up area, so little distinction was made between the urban area and the local government area.

As a result, the term "city" began to take on two meanings.

The word "city" came to be used in a less formal sense to describe major urban areas independent of local body boundaries. This informal usage is jealously guarded. Gisborne, for example, adamantly described itself as the first city in the world to see the new millennium. Gisborne is administered by a district council, but its status as a city is not generally disputed.

Under the current law the minimum population for a new city is 50,000.

Swedish municipalities are governed by a legislative body called a kommunfullmäktige in Swedish. Though Swedish law uses the term "municipal assembly" to describe these bodies in English, they are frequently referred to as "city councils" as well, even in official contexts in many of Sweden's major cities, including Stockholm, Gothenburg, and Malmö.

In the UK, a city council is: 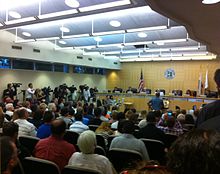 A city council chambers in California

City councils generally consist of several (usually somewhere between 5 and 50, depending on the city's size) elected aldermen or councillors. Other common titles for members of the council include councilmember or councilman/woman.

In some cities, the mayor is a voting member of the council who serves as chairman; in others, the mayor is the city's independent chief executive (or strong mayor) with veto power over city council legislation. In larger cities the council may elect other executive positions as well, such as a council president and speaker.

The role of the mayor in the council varies depending on whether or not the city uses council-manager government or mayor-council government, and by the nature of the statutory authority given to it by state law, city charter, or municipal ordinance.