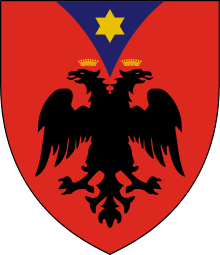 Coat of arms of the Kastrioti family.

The Kastrioti family were a noble Albanian family in the middle Ages. The Kastrioti dynasty originally hailed from the Dibër region in Albania. Pal, the founder was Roman-Catholic (as the majority of Albanians at that time)[citation needed] and had good relations to the Republic of Venice, the Kingdom of Naples and the Papacy.

The first notable member of the Kastriotis was Pal Kastrioti who fought with his Albanian knights on the side of the Serbs in the battle of Kosovo (1389) against the Ottomans. He did not survive the battle. His son Gjon Kastrioti († 1437), father of Skanderbeg, expanded the territory of his dominions but was ultimately crushed by Ottomans. His son George Kastrioti Skanderbeg (1405–1468) was the most famous member of the Kastrioti family known for his epic resistance to superior Ottoman forces. Today he renowned as an Albanian national hero.

Coat of arms of the Kastrioti family.

The coat of arms of the Kastrioti was a black double headed eagle. This symbol was inspired by the Byzantine war flag. When Skanderbeg united the Albanian princes in order to defend Albania from the Ottomans he first used the black double-headed eagle on a red background as a war flag. Because of his fame and status as a national hero, Albania uses Skanderbeg's war flag as its national flag. The eagle on the national flag of Albania has 25 feathers, which symbolizes the 25 successful years of Skanderbeg's struggle against the Ottoman armies.