Northumbria, a kingdom of Angles in northern England, was initially divided into two kingdoms, Bernicia and Deira. The two were first united by Aethelfrith around the year 604, and except for occasional periods of division over the subsequent century, they remained so.

The exceptions are during the brief period from 633 to 634, when Northumbria was plunged into chaos by the death of King Edwin in battle and the ruinous invasion of Cadwallon ap Cadfan of Gwynedd. The unity of the Northumbrian kingdoms was restored after Cadwallon's death in battle in 634. 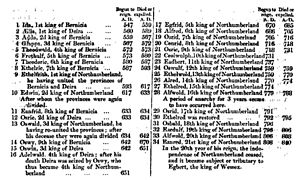 Another exception is a period from about the year 644 to 664, when kings ruled individually over Deira. In 651, King Oswiu had Oswine of Deira killed and replaced by Aethelwald, but Aethelwald did not prove to be a loyal sub-king, allying with the Mercian king Penda; according to Bede, Aethelwald acted as Penda's guide during the latter's invasion of Northumbria but withdrew his forces when the Mercians met the Northumbrians at the Battle of Winwaed. After the Mercian defeat at Winwaed, Aethelwald lost power and Oswiu's own son, Alchfrith, became king in his place. In 670, Aelfwine, the brother of the childless King Ecgfrith, was made king of Deira; by this point the title may have been used primarily to designate an heir. Aelfwine was killed in battle against Mercia in 679, and there was not another separate king of Deira until the time of Norse rule.

Following are lists of the kings of Bernicia, Deira, and Northumbria. Note that many of their dates, particularly in the earlier period, are considered unreliable.

This was a time when spellings varied widely, even within a document. A number of variations of the details below exist. Amongst these are the preference between þ and ð (hard and soft 'th').

The character '7' was used as the ampersand '&' in contemporary Anglo-Saxon writings. The era pre-dates the emergence of forms of writing accepted today, notably minuscule, and the letters 'W' and 'U'. Where W was followed by U this was generally rendered as 'VV' (which was also used for 'W' alone).

Kings of Northumbria before the Norse era

Kings of Northumbria in the Norse era