The location of Germany 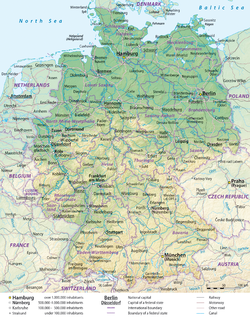 Germany is a country in Central Europe, stretching from the Alps, across the North European Plain to the North Sea and the Baltic Sea. Germany has the second largest population in Europe (after the European part of Russia) and is seventh largest in area. The territory of Germany covers 357,021 km2 (137,847 sq mi), consisting of 349,223 km2 (134,836 sq mi) of land and 7,798 km2 (3,011 sq mi) of water. Elevation ranges from the mountains of the Alps (highest point: the Zugspitze at 2,962 metres (9,718 ft) in the south to the shores of the North Sea (Nordsee) in the northwest and the Baltic Sea (Ostsee) in the northeast. Between lie the forested uplands of central Germany and the low-lying lands of northern Germany (lowest point: Neuendorf-Sachsenbande at 3.54 metres (11.6 ft) below sea level), traversed by some of Europe's major rivers such as the Rhine, Danube and Elbe.[1] Because of its central location, Germany shares borders with nine European countries, second only to Russia: Denmark in the north, Poland and the Czech Republic in the east, Austria and Switzerland in the south, France in the southwest and Belgium, Luxembourg and the Netherlands in the west. German Unity Day is celebrated on October 3 every year.

The current, post-1990 territory of the Federal Republic of Germany is 30.3% bigger than the Cold-War era West Germany and 23.8% and 33.9% smaller than the former territories of Weimar and Imperial Germany, respectively. 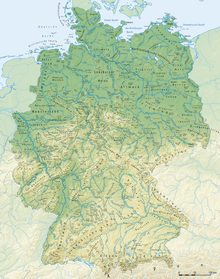 The northern third of the country lies in the North European Plain, with flat terrain crossed by northward-flowing watercourses (Elbe, Ems, Weser, Oder). Wetlands and marshy conditions are found close to the Dutch border and along the Frisian coast. Sandy Mecklenburg in the northeast has many glacier-formed lakes dating to the last glacial period.

Moving south, central Germany features rough and somewhat patternless hilly and mountainous countryside, some of it formed by ancient volcanic activity. The Rhine valley cuts through the western part of this region. The central uplands continue east and north as far as the Saale and merge with the Ore Mountains on the border with the Czech Republic. Upland regions include the Eifel, Hunsrück but Palatine Forest west of the Rhine, the Taunus hills north of Frankfurt, the Vogelsberg massif, the Rhön, and the Thüringer Wald. South of Berlin, the east-central part of the country is more like the low northern areas, with sandy soil and river wetlands such as the Spreewald region.

Southern Germany's landforms are defined by various linear hill and mountain ranges like the two adjacent ranges of the Swabian and Franconian Alb (reaching approximately from the source of the Danube in the southwest of Baden-Württemberg, south of Stuttgart, across Swabia into Central Franconia and to the valley of the river Main) and the Bavarian Forest along the border between Bavaria and the Czech Republic. The Alps on the southern border are the highest mountains, but relatively little Alpine terrain lies within Germany (in southeastern Swabia and Upper Bavaria) compared to Switzerland and Austria. The Black Forest, on the southwestern border with France, separates the Rhine from the headwaters of the Danube on its eastern slopes.

Germany's climate is temperate and marine, with cool, cloudy, wet winters and summers and in the south occasional warm föhn wind. The greater part of Germany lies in the cool/temperate climatic zone in which humid westerly winds predominate. In the northwest and the north the climate is extremely oceanic and rain falls all the year round. Winters there are relatively mild and summers comparatively cool. In the east the climate shows clear continental features; winters can be very cold for long periods, and summers can become very warm. Here too, long dry periods are often recorded. In the centre and the south there is a transitional climate which may be predominantly oceanic or continental, according to the general weather situation. Winters are mild and summers tend to be cool, though maximum temperatures can exceed 30 °C (86 °F) for several days in a row during heat waves. The warmest regions of Germany can be found in the south-west (see rhine rift, German Wine Route and Palatinate). Here summers can be hot with a high number of days exceeding 30 °C (86 °F). Sometimes minimum temperatures don't drop under 20 °C (68 °F), which is relatively rare in other regions.[2][3]

Germany has a total of 2,389 km of coastline, and borders totalling 3,621 km (clockwise from north: Denmark 68 km, Poland 456 km, Czech Republic 646 km, Austria 784 km, Switzerland 334 km, France 451 km, Luxembourg 138 km, Belgium 167 km, Netherlands 577 km). The German-Austrian border crosses itself near Jungholz. The border with Belgium includes 5 German exclaves because the Vennbahn railway is on Belgian territory crossing in and out of Germany.

Throughout the Karst rocks many caves were formed especially in the valley of the Hönne. The biggest culture cave of Europe is located in Balve. 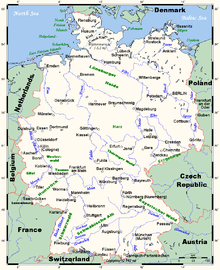 The main rivers in Germany are:

Further important rivers include the Isar in the southeast, the Main in central Germany, the Neckar in the southwest, and the Weser in the North. See also the list of rivers in Germany.

This is a list of the extreme points of Germany, the points that are farther north, south, east or west than any other location.

The extreme points of the German Confederation are mentioned in the first stanza of Das Lied der Deutschen, of which the third stanza is today the national anthem of Germany. They were accurate when the song was penned in 1841, but are no longer accurate today. The limits mentioned are the following rivers: