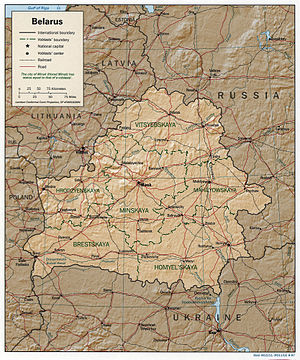 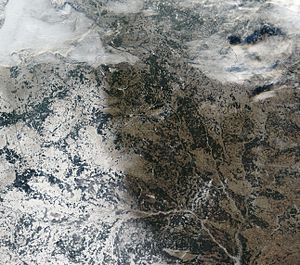 Satellite image of Belarus in December 2002.

Belarus, a landlocked, generally flat country (the average elevation is 162 meters (531 ft) above sea level) without natural borders, occupies an area of 207,600 square kilometers (80,200 sq mi), or slightly smaller than the United Kingdom or the state of Kansas. Its neighbors are Russia to the east and northeast, Latvia to the north, Lithuania to the northwest, Poland to the west, and Ukraine to the south.

Belarus's mostly level terrain is broken up by the Belarusian Range (Byelaruskaya Hrada), a swath of elevated territory, composed of individual highlands, that runs diagonally through the country from west-southwest to east-northeast. Its highest point is the 346-meter (1,135 ft) Mount Dzyarzhynskaya, named for Felix Dzerzhinsky, head of Cheka. Northern Belarus has hilly landscape with many lakes and gently sloping ridges created by glacial debris. In the south, about one-third of the republic's territory around the Pripiac River is taken up by the low-lying swampy plain of Palyessye, shared with Ukraine, Poland and Russia.

Glacial scouring accounts for the flatness of Belarusian terrain and for its numerous lakes.

Belarus's 3,000 streams and 4,000 lakes are major features of the landscape and are used for floating timber, shipping, and power generation. Major rivers are the west-flowing Western Dvina and Nyoman rivers, and the south-flowing Dniapro River with its tributaries, Berezina River, Sozh, and Prypyat rivers. The Prypyat River has served as a bridge between the Dnepr flowing to Ukraine and the Vistula in Poland since the period of Kievan Rus'. Lake Narach, the country's largest lake, covers eighty square kilometers.

Nearly one-third of the country is covered with pushchas, large unpopulated tracts of forests. In the north, conifers predominate in forests that also include birch and alder; farther south, other deciduous trees grow. The Belavezhskaya Pushcha (shared with Poland) in the far west is the oldest and most magnificent of the forests; a reservation here shelters animals and birds that became extinct elsewhere long ago.

Because of the proximity of the Baltic Sea (257 kilometers / 160 miles at the closest point), the country has temperate continental climate. Winters last between 105 and 145 days, and summers last up to 150 days. The average temperature in January is −6 °C (21 °F), and the average temperature for July is about 18 °C (64 °F), with high humidity. Average annual precipitation ranges from 550 to 700 millimeters (21.7 to 27.6 in) and is sometimes excessive.

Environment - international agreements
Signed, but not ratified: none of the selected agreements

The most notorious legacy of pollution from the Soviet era is the Chernobyl Disaster of 1986. Some 70% of the radiation spewed was carried by the wind to Belarus, where it affected at least 25% of the country—especially the Homyel and Mahilyow provinces, in the south and southeast, and 22% of the population. Although more than 2 million people (including 600,000 children) lived in areas affected by fallout from the disaster, the Soviet government tried to cover up the accident until[citation needed] Swedish scientists pressed for an explanation of the unusually high levels of atmospheric radiation in Sweden.

The Belarusian government's request to the Soviet government for a minimum of 17 billion rubles to deal with the consequences was answered with Moscow's offer of only 3 billion rubles. According to one official in 1993, the per capita expenditure on the accident was one kopeck in Russia, three kopecks in Ukraine, and one rouble (100 kopecks) in Belarus.

Despite the government's establishment of the State Committee for Chernobyl, the enactment of laws limiting who may stay in contaminated areas, and the institution of a national program for research on the effects, little progress was made in coping with the consequences of the disaster, owing to the lack of money and the government's sluggish attitude. In 1994 a resettlement program for 170,000 residents was woefully underbudgeted and far behind schedule. To assist victims of Chernobyl, a Western organization, the Know-How Fund, provided many Belarusian doctors with training in the latest bone-marrow techniques in Europe and the United States.

The long-range effects of the disaster include an increasing incidence of various kinds of cancer and birth defects; congenital defects in newborns are reported to be 40 % higher than before the accident. Tainted water, livestock, farm produce, and land are widespread, and the extensive wetlands retain high concentrations of radiation. Cleanup of the disaster accounted for 14 % of the state budget in 1995. Other environmental problems include widespread chemical pollution of the soil, which shows excessive pesticide levels, and the industrial pollution found in nearly all the large cities.

Area
country comparison to the world: 92