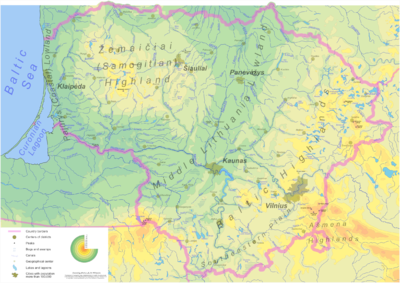 The largest and most populous of the Baltic states, Lithuania has 60 miles (97 km) of sandy coastline which faces the open Baltic Sea, between Latvia and Russia. Lithuania's major warm-water port of Klaipėda lies at the narrow mouth of Curonian Lagoon, a shallow lagoon extending south to Kaliningrad and separated from the Baltic sea by Curonian Spit, where Kuršių Nerija National Park was established for its remarkable sand dunes.

The Neman River and some of its tributaries are used for internal shipping (in 2000, 89 inland ships carried 900,000 tons of cargo, which is less than 1% of the total goods traffic). Between 56.27 and 53.53 latitude and 20.56 and 26.50 longitude, Lithuania is glacially flat, except for morainic hills in the western uplands and eastern highlands no higher than 300 meters. The terrain is marked by numerous small lakes and swamps, and a mixed forest zone covers almost 33% of the country. The growing season lasts 169 days in the east and 202 days in the west, with most farmland consisting of sandy- or clay-loam soils. Limestone, clay, sand, and gravel are Lithuania's primary natural resources, but the coastal shelf offers perhaps 1,600,000 m3 (10 Mbbl) of oil deposits, and the southeast could provide high yields of iron ore and granite. According to some geographers, the Geographical Center of Europe is just north of Lithuania's capital, Vilnius. 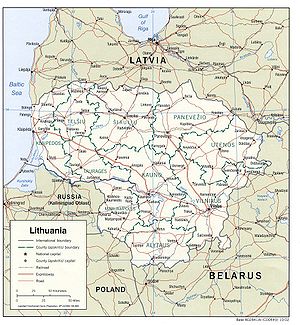 Lithuania is situated on the eastern shore of the Baltic Sea. Lithuania's boundaries have changed several times since 1918, but they have been stable since 1945. Currently, Lithuania covers an area of about 65,200 square kilometers. About the size of West Virginia, it is larger than Belgium, Denmark, Latvia, the Netherlands, or Switzerland.

Lithuania's northern neighbor is Latvia. The two countries share a border that extends 453 kilometers. Lithuania's eastern border with Belarus is longer, stretching 502 kilometers. The border with Poland on the south is relatively short, only ninety-one kilometers, but is very busy because of international traffic. Lithuania also has a 227-kilometer border with Russia. Russian territory adjacent to Lithuania is Kaliningrad Oblast, which is the northern part of the former German East Prussia, including the city of Kaliningrad. Finally, Lithuania has 108 kilometers of Baltic seashore with an ice-free harbor at Klaipėda. The Baltic coast offers sandy beaches and pine forests and attracts thousands of vacationers.

Lithuania is situated on the eastern shore of the Baltic Sea and borders Latvia on the north, Belarus on the east and south, and Poland and the Kaliningrad region of Russia on the southwest. It is a country of gently rolling hills, many forests, rivers and streams, and lakes. Its principal natural resource is agricultural land.

Lithuania lies at the edge of the Northern European Plain. Its landscape was shaped by the glaciers of the last Ice Age, which retreated about 25,000–22,000 years BP (Before Present). Lithuania's terrain is an alternation of moderate lowlands and highlands. The highest elevation is 297.84 meters above sea level, found in the eastern part of the republic and separated from the uplands of the western region of Samogitia by the fertile plains of the southwestern and central regions. The landscape is punctuated by 2,833 lakes larger than 10,000 m² and 1,600 smaller ponds. The majority of the lakes are found in the eastern part of the country. Lithuania also has 758 rivers longer than ten kilometers. The largest river is the Nemunas (total length 917 km), which originates in Belarus. The other larger waterways are the Neris (510 km), Venta (346 km), and Šešupė (298 km) rivers. However, only 600 kilometers of Lithuania's rivers are navigable.

Once a heavily forested land, Lithuania's territory today consists of only 32.8 percent[1] woodlands—primarily pine, spruce, and birch forests. Ash and oak are very scarce. The forests are rich in mushrooms and berries, as well as a variety of plants.

The longest measured temperature records from the Baltic area cover about 250 years. The data show that there were warm periods during the latter half of the 18th century, and that the 19th century was a relatively cool period. An early 20th century warming culminated in the 1930s, followed by a smaller cooling that lasted until the 1960s. A warming trend has persisted since then.[2]

Lithuania experienced a drought in 2002, causing forest and peat bog fires.[3] The country suffered along with the rest of Northwestern Europe during a heat wave in the summer of 2006.

Extreme temperatures in Lithuania by month[4]

Concerned with environmental deterioration, Lithuanian governments have created several national parks and reservations. The country's flora and fauna have suffered, however, from an almost fanatical drainage of land for agricultural use. Environmental problems of a different nature were created by the development of environmentally unsafe industries. According to calculations by experts, about one-third of Lithuanian territory is covered by polluted air at any given time.[citation needed] Problems exist mainly in the cities, such as Vilnius, Kaunas, Jonava, Mažeikiai, Elektrėnai, and Naujoji Akmenė—the sites of fertilizer and other chemical plants, an oil refinery, power station, and a cement factory.

Water quality has also been an issue. The city of Kaunas, with a population of about 400,000, had no water purification plant until 1999; sewage was sent directly into the Neman River. Tertiary wastewater treatment is scheduled to come on-line in 2007.[5] River and lake pollution are other legacies of Soviet carelessness with the environment. The Courland Lagoon, for example, separated from the Baltic Sea by a strip of high dunes and pine forests, is about 85 percent contaminated. Beaches in the Baltic resorts, such as the well-known vacation area of Palanga, are frequently closed for swimming because of contamination. Forests affected by acid rain are found in the vicinity of Jonava, Mažeikiai, and Elektrėnai, which are the chemical, oil, and power-generation centers. Lithuania was among the first former Soviet republics to introduce environmental regulations. However, because of Moscow's emphasis on increasing production and because of numerous local violations, technological backwardness, and political apathy, serious environmental problems now exist.

Environment—current issues: contamination of soil and groundwater with petroleum products and chemicals at military bases

Lithuania's landscape is pleasing to the eye but modest in natural resources.[attribution needed] The republic has an abundance of limestone, clay, quartz sand, gypsum sand, and dolomite, which are suitable for making high-quality cement, glass, and ceramics. There also is an ample supply of mineral water, but energy sources and industrial materials are all in short supply. Oil was discovered in Lithuania in the 1950s, but only a few wells operate, and all that do are located in the western part of the country. It is estimated that the Baltic Sea shelf and the western region of Lithuania hold commercially viable amounts of oil, but if exploited this oil would satisfy only about 20 percent of Lithuania's annual need for petroleum products for the next twenty years. Lithuania has a large amount of thermal energy along the Baltic Sea coast which could be used to heat hundreds of thousands of homes, as is done in Iceland. In addition, iron ore deposits have been found in the southern region of Lithuania. But commercial exploitation of these deposits probably would require strip mining, which is environmentally unsound. Moreover, exploitation of these resources will depend on Lithuania's ability to attract capital and technology from abroad.