Donauinsel, separating New Danube (left) from Danube (right). View from Kahlenberg. Mind Millennium Tower near the center of the picture, and UNO-City at left margin 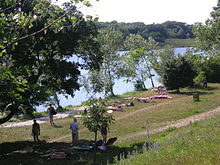 Part of a nudist beach

The Donauinsel (Danube Island) is a long, narrow island, in central Vienna, Austria, between the Danube river and the parallel excavated channel Neue Donau ("New Danube"). The island is 21.1 km (13.1 mi) in length, but is only 70–210 metres (230–690 ft) broad. The New Danube waterway is practically an elongated (swimming) lake, technically a diluvian bed.[1]

To most visitors, the island is known as a recreational area with bars, restaurants and nightclubs. It has sports opportunities from rollerblading, cycling and swimming to canoeing. There is one beach that, in its beginning, felt so exotic that it was soon nicknamed the "Copa Cagrana" as a humoristic allusion to Rio de Janeiro's Copacabana: Kagran is the part of the 22nd District of Vienna next to that beach. In the southern and northern parts of the island, there are extensive (and free) nude beaches.

The Donauinselfest is an internationally well-known annual open air festival, and Europe's biggest event of this kind, expected to soon hit the 3-million-visitors mark. It takes place at the end of June (Friday through Sunday) – except for 2008 (September 5th–7th), due to Austria (and Switzerland) hosting the European Football Championship. On September 23, 2008, Madonna gave her first concert in Vienna there in front of an impressive crowd of 57,000.

The main purpose of the island however is to be part of Vienna's highly sophisticated flood protection system. As the mighty river Danube crosses the city (before major extensions: passed nearby), this has constantly been a concern for hundreds of years. The first notable measures were taken between 1870 and 1875. A central bed, 280 m, was dug out, and an inundation area of 450 m was created at the river's left bank.

In 1970, a new plan was conceived and soon executed: digging an additional channel to replace the former inundation area, and using the spoil to build up the remaining strip of land between the straightened bed from the 19th century flood defence schemes and the newly created one. The new channel is called the Neue Donau (New Danube). After the completion of the works it was envisaged that the resulting island should eventually be used for recreation. The flood control system is designed to protect from flash floods bringing river flows of up to 14,000 m3 per second. This has only happened once in Vienna's history in 1501; the heavy 2002 flood brought flows of 10,000 m3 per second. It includes the Danube Canal's historic Nußdorf watergate, locks at either end of New Danube, a groundwater level control system integrated into the right bank flood levee (which creates appropriate conditions for the large park area Prater, once part of a wide alluvial forest zone), and the new Freudenau river plant's sluice.[2]

References and other external links