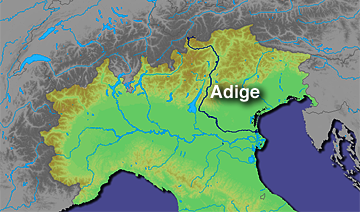 The river flows out of the artificial Alpine , located at the (convert|1504|m) close to the borders with Austria and Switzerland above the Inn valley. The lake is known for the church tower that marks the site of the former village of Curon Antica (Alt Graun) that was abandoned and flooded in 1953 when the dam was finished. Near Glurns, the from the Swiss joins.

The Adige then runs eastbound through the (Venosta Valley) to where it is met by the river from the north. South of , the Isarco joins the river that is now heading south through a valley that always has been one of the major routes through the , leading to and from the Resia Pass and the , at convert|1370|m considered the easiest of the main Alpine passes.

The "Salurner Klause"/"Chiusa di Salorno" narrows at marks the southern-most part of the German-speaking area. Thus, the Adige was mentioned in the "Lied der Deutschen" of 1841 as the southern border of the area of the time. This song was made the national anthem of in 1922, after Italy took control of all of the Adige.

Near , the Avisio, Noce, and Fersina rivers join. The Adige then crosses Trentino and later , flowing past the city of and the towns of and through the Lagarina valley and the north-eastern part of the Po plain into the sea. Both the Adige and the Po run parallel in the without properly joining.

As a river in the mountains, it is subject to sudden swellings and overflows. It is also connected through artificial underground canals to for flood prevention.