Natural hazards: flooding is a threat in areas of reclaimed coastal land, protected from the sea by concrete dikes

Geography - note: crossroads of Western Europe; majority of West European capitals within 1,000 km of Brussels which is the seat of both the EU and NATO 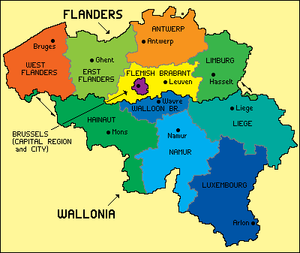 Map of Belgian regions and provinces.

To get the total area of Belgium, the surface of the Brussels-Capital Region should be added to the list, since Brussels is not in any Belgian province anymore since the province of Brabant has been split. Belgium has also 3,462 square kilometres of sea territories in the North Sea. On 29 May 2000, 2,000 square metres were granted by the Netherlands to Belgium (a piece of land in Zelzate along the Ghent-Terneuzen Canal).

Compared to other countries, Belgium is 1.5 times larger than Wales in the United Kingdom and about the size of Maryland in the United States. Belgium is actually used as an unusual unit of measurement in comparing country sizes.[2] 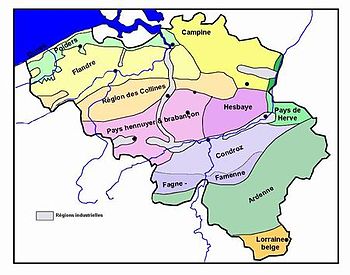 The natural regions of Belgium. 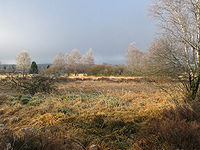 Landscape in the Hautes Fagnes, in the Ardennes

Dunes in Koksijde, at the North Sea

Belgium has three main geographical regions: the coastal plain in the north-west, the central plateau, and the Ardennes uplands in the south-east. The coastal plain consists mainly of sand dunes and polders. Polders are areas of land, close to or below sea level that have been reclaimed from the sea, from which they are protected by dikes or, further inland, by fields that have been drained with canals. The second geographical region, the central plateau, lies further inland. This is a smooth, slowly rising area that has many fertile valleys and is irrigated by many waterways. Here one can also find rougher land, including caves and small gorges. The third geographical region, called the Ardennes, is more rugged than the first two. It is a thickly forested plateau, very rocky and not very good for farming, which extends into northern France and in Germany where it is named Eifel. This is where much of Belgium's wildlife can be found. Belgium's highest point, the Signal de Botrange is located in this region at only 694 metres (2,277 ft). Belgium has relatively few natural lakes, and none of any great size.

Notable natural regions include the Ardennes, Campine and High Fens.

All of Belgium is drained into the North Sea, except the municipality of Momignies (Macquenoise), which is drained by the Oise river into the English Channel. A total of 3 streams cross Belgium: the Scheldt (200 km in Belgium, 350 km in total), the Meuse (183 km inBelgium, 925 km in total) and the Yser (50 km in Belgium, 78 km in total). The main rivers in Belgium include the Rupel, Senne, Sambre, Lesse, Ourthe, Lys and Dijle. The main lakes include the Lake Genval, Lake Bütgenbach, Lake Eau d'Heure and Lake Robertville.

Belgium has also many artificial waterways or canals, among others the Brussels-Scheldt Maritime Canal, the Brussels-Charleroi Canal, the Canal du Centre and the Albert Canal.

The Belgian climate, like most of northwest Europe,[3] is maritime temperate, with significant precipitation in all seasons (Köppen climate classification: Cfb; the average temperature is 3 °C (37.4 °F) in January, and 18 °C (64.4 °F) in July; the average precipitation is 65 mm (2.6 in) in January, and 78 mm (3.1 in) in July).[4] Belgium has mild winters and cool summers and is rainy, humid and cloudy.

See also: List of mountains and hills in Belgium

Belgium's highest point is the Signal de Botrange at 694 metres above the sea level. Other hills in Belgium include the Kemmelberg (159 m high) and the Koppenberg (77 m high) both known as being climbed by professional cyclist during the annual cycling road races of respectively Gent–Wevelgem and the Tour of Flanders. 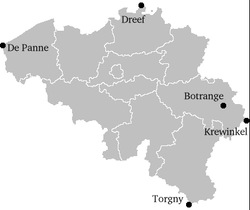 This is a list of the extreme points of Belgium, the points that are farther north, south, east or west than any other location.

Natural resources in Belgium include construction materials, silica sand and carbonates. Belgium used to have coal mines. As of 2007, the land use was as follows:

Because of its high population density and location in the centre of Western Europe, Belgium faces serious environmental problems. A 2003 report[6] suggested that the water in Belgium's rivers was of the lowest quality in Europe, and bottom of the 122 countries studied. The environment is exposed to intense pressures from human activities: urbanization, dense transportation network, industry, extensive animal breeding and crop cultivation; air and water pollution also have repercussions for neighboring countries; uncertainties regarding federal and regional responsibilities (now resolved) have slowed progress in tackling environmental challenges.

The main cities in Belgium in terms of population are Brussels, Antwerp, Ghent, Charleroi and Liège. Other notable cities include Bruges, Namur, Leuven, Mons and Mechelen.