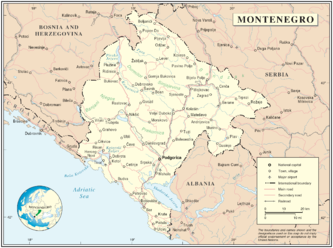 Montenegro (Montenegrin: Crna Gora, Црна Гора meaning "black mountain") is a small, mountainous state in south-west Balkans. Montenegro borders Croatia, Bosnia and Herzegovina, Serbia, Albania and the Adriatic Sea. While being a small country (13,812 km²), it is very diverse regarding the terrain configuration.

Terrain in Montenegro ranges from high mountains in the northern part of the country, through karst segment in central and western part, to a narrow coastal plain. The coastal plain disappears completely in the north, where Mount Lovćen and other mountain ranges plunge abruptly into the inlet of the Gulf of Kotor. The coastal region is noted for active seismicity.

Montenegro's section of the karst lies generally at elevations of 100 m (328 ft) above sea level-although some areas rise to 1,800 m (5,906 ft). The lowest segment is in the valley of the Zeta River, which flows at an elevation of 450 m (1,476 ft). The river occupies the centre of Nikšić field, a flat-floored, elongated depression typical of karstic regions. The underlying rock is predominantly limestone, which dissolves to form sinkholes and underground caves.

The Zeta River Valley, or Bjelopavlići plain, merges in the southeast with the second significant flat lowland in Montenegro, the Zeta plain. Zeta plain stretches north of the Lake Scutari at elevation of 40 m (131 ft). The two plains are today the most densely populated areas of Montenegro, housing the two biggest Montenegrin cities, Podgorica and Nikšić.

The high mountains of Montenegro include some of the most rugged terrain in Europe. They average more than 2,000 m (6,562 ft) in elevation. Among notable peaks is Bobotov Kuk in the Durmitor mountain, which reaches 2,523 m (8,278 ft). The Montenegrin mountains were the most ice-eroded section of the Balkan Peninsula during the last glacial period.

The coast of Montenegro is 294 km (183 mi) long. Unlike its northern neighbour Croatia, Montenegro has no large inhabited islands along the coast. A notable feature of the Montenegrin coast is Bay of Kotor, a fjord-like gulf, which is in fact a submerged river canyon. The Bay of Kotor is surrounded by mountains up to 1,000 m (3,281 ft) high, which plunge alsmost vertically into the sea.

To the south of the Bay of Kotor, there is a narrow coastal plain, no more than 4 km wide, which is guarded from the north by high mountains. The plain provided space for numerous small coastal settlements.

Montenegro's surface runoff in the north is carried away by the Lim and Tara river systems, which enter the Danube via the Drina River of Bosnia and Herzegovina. In southern Montenegro, streams flow toward the Adriatic Sea. Much of the drainage of the karstic region is not on the surface but travels in underground channels.

The largest lake in Montenegro and the Balkans is Lake Scutari. Known in Montenegro as Skadarsko Jezero, it lies near the coast and extends across the international border into northern Albania. It is 50 km (31 mi) long and 16 km (9.9 mi) wide, with a total surface area of 370 km2 (142.9 sq mi). Some 60 percent lies within Montenegrin territory. The water body occupies a karstic polje depression that has a floor lying below sea level.

Montenegro's mountainous regions are noted for their numerous lakes.

Montenegro's mountainous regions receive some of the highest amounts of rainfall in Europe. Annual precipitation at Crkvice, in the Karst above the Bay of Kotor, is 4,928 mm (194 in). Like most areas along the Mediterranean Sea, precipitation occurs principally during the cold part of the year, but in the higher mountains a secondary summer maximum is present. Snow cover is rare along the Montenegrin coast. It averages 10 days in karstic polje depressions and increases to 120 days in the higher mountains.