The climate of Azerbaijan is unique. Nine of the Earth's eleven climatic zones can be discovered in Azerbaijan.[1]

Azerbaijan is situated on the northern extremity of the subtropical zone, in the southeastern part of the Caucasus and the northwestern part of the Iran plateau. The complicated geographical location and landscape, the proximity of the Caspian Sea, the effect of sun's radiation, air masses of different origin, etc., contribute to its climatological diversity.

As a predominantly mountainous country, Azerbaijan is surrounded by the Major Caucasus, Minor Caucasus, Talysh and North Iranian Mountains. The Kur lowland, between the Major and Minor Caucasus, stretches to the Caspian Sea in the eastern part of the country. The Major Caucasus, situated in the north of the country and stretching from the northwest to the southeast, protects the country from direct influences of northern cold air masses. That leads to the formation of a subtropical climate on most of the foothills and plains of the country. Other mountain chains surrounding the country also impact air circulation. The complexity of the landscape causes nonuniform formation of climatic zones and creates vertical climate zones. 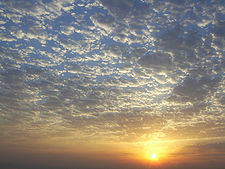 The Azerbaijani plains and foothills have high insolation rates. The sun shines for 2,200 to 2,400 hours annually on the Kur-Araz lowland, Apsheron peninsula and other plains and foothills, and 2,600 to 2,800 hours on the plains around Araz in the Nakhchivan region. Due to increased cloudiness in the mountainous regions, those areas receive only 1,900 to 2,200 hours of direct sunlight..

Climate formation in Azerbaijan is influenced by various air masses. Cold air masses, such as the Kara and Scandinavian arctic anticyclones, the temperate Siberian anticyclones, and the maritime Azores maximum influence the climate. Likewise, tropical hot air masses (subtropical anticyclone and southern cyclones), as well as Central Asian anticyclones and local weather conditions, have influence. These air masses enter the country in different ways thanks to its varied geography. Thus, although they do not prevent the hot masses entering Azerbaijan from the south, cold continental and maritime air masses cause changes in properties of those hot air masses, and influence the dynamics of atmosphere conditions.

Some of the major influences on Azerbaijan's climate are temperature, precipitation, humidity, rate of evaporation, and cloud cover.

The temperature regime and its distribution throughout Azerbaijan is regular, and depends on the features of air masses entering the country, the regional landscape, and proximity to the Caspian Sea. The sea causes temperatures in the maritime areas (20 kilometres or 12 miles away from the sea) to decline in the summer and rise in the winter. At the same time, the sea moderates the influence of hot and dry air masses coming from Central Asia. The average annual temperature is 14–15 °C (57–59 °F) in the Kur-Araz Lowland, the coastal regions south to the Apsheron Peninsula, and in the Lenkoran Lowland. The temperature declines with proximity to the mountains, averaging 4–5 °C (39–41 °F) at an altitude of 2,000 meters (6,600 ft), and 1–2 °C (34–36 °F) at 3,000 meters (9,800 ft).

Taking into consideration the distribution and features of the weather, temperature, humidity, and precipitation, nine out of the 11 climate patterns in the Köppen climate classification can be found in Azerbaijan[citation needed]. Many of these patterns are divided into subtypes.