Because of its position on the southeastern portion of the European continent, Romania has a climate which ranges from temperate to continental. Climatic conditions are somewhat modified by the country's varied topography. The Carpathians serve as a barrier to Atlantic air masses, limiting their oceanic influences to the west and center of the country (Transilvania, Banat and Maramureş), which have milder winters and heavier rainfalls as a result. The mountains also block the continental influences of the vast plain to the north in the Ukraine, which results in frosty winters and less rain to the south and southeast. In the extreme southeast, Black Sea influences offer a milder, maritime climate. The average annual temperature is 11 °C (51.8 °F) in the south and middle-south and 8 °C (46.4 °F) in northeast. In Bucharest, the temperature ranges from average low −5 °C (23 °F) in January to average high 29 °C (84.2 °F) in July and August, with average temperatures of −3 °C (26.6 °F) in January and 23 °C (73.4 °F) in July and August. Rainfall, although adequate throughout the country, decreases from west to east and from mountains to plains. Some mountainous areas receive more than 1,010 mm (39.8 in) of precipitation each year. Annual precipitation averages about 635 mm (25 in) in central Transylvania, 521 mm (20.5 in) at Iaşi in Moldavia, and only 381 mm (15 in) at Constanţa on the Black Sea. 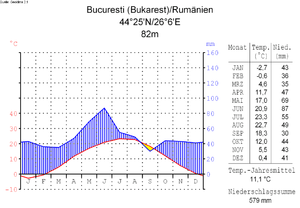 Average temperature and precipitations in Bucharest

Owing to its distance from the open sea, Romania has a continental climate. Summers are generally very warm to hot, with average maxima in Bucharest being around 29 °C (84.2 °F), with temperatures over 35 °C (95 °F) not unknown in the lower-lying areas of the country. Minima in Bucharest and other lower-lying areas are around 18 °C (64.4 °F), but at higher altitudes both maxima and minima decline considerably.

Satellite image of Romania in December, showing most of its territory under snow

Winters are quite cold, with average highs even in lower-lying areas being no more than 3 °C (37.4 °F) and below −15 °C (5 °F) in the highest mountains, where some areas of permafrost occur on the highest peaks.

Precipitation is generally modest, averaging over 750 mm (29.5 in) only on the highest western mountains - much of it falling as snow which allows for an extensive skiing industry. In the delta of the Danube, rainfall is very low, averaging only around 370 mm (14.6 in) per year, whilst in the more westerly lowland like Bucharest it is around 530 mm (20.9 in).

Averages and records by city