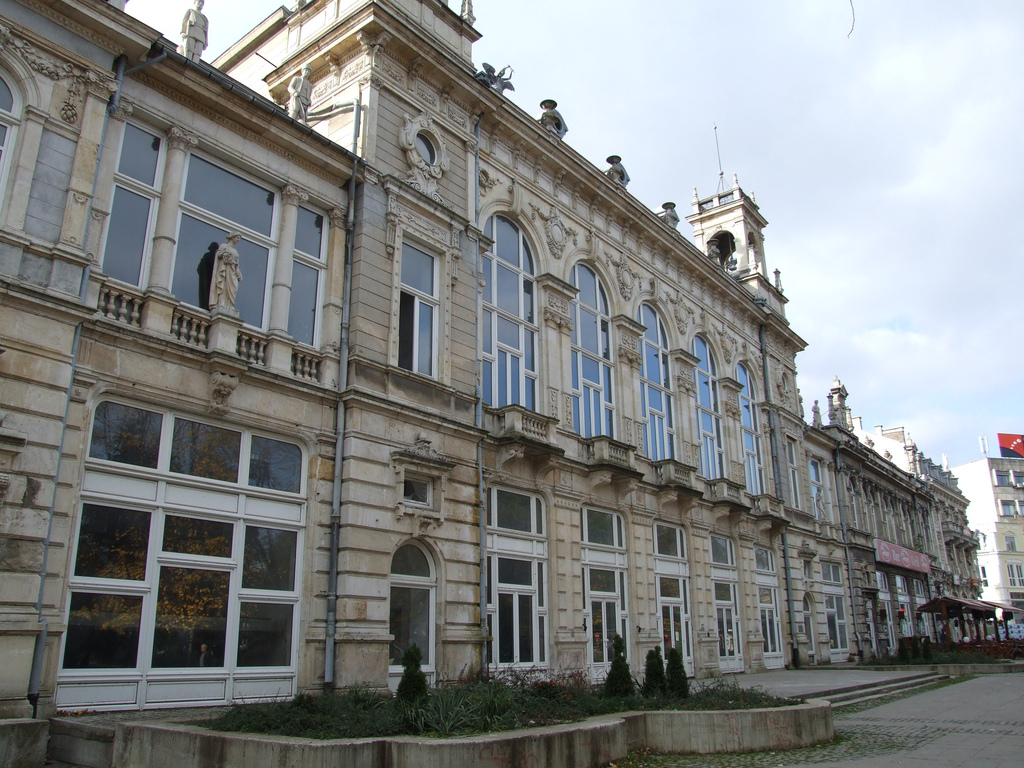 Rousse (also transliterated as Ruse or Russe; _bg. Русе IPA| [ˈru.sɛ] ) is the fifth-largest city in with a population of near 175,600. Rousse is situated in the northeastern part of the country, on the right bank of the , opposite the n city of , 300 km from the capital and 200 km from the . It is the most significant Bulgarian river port, serving an important part of the international trade of the country.

Rousse is known for its 19th- and 20th-century and Neo-Rococo architecture, which attracts many tourists. The Rousse-Giurgiu Friendship Bridge, the only one in the shared Bulgarian-Romanian section of the Danube, crosses the river nearby.

Rousse is located on the right bank of the Danube, which is the high bank, having two underwater terraces and three land terraces at 15–22 m, 30–66 m, and 54–65 m. The average altitude is 45.5 m AMSL. The urban area is an approximately 11-km ellipse running along the river. The city extends from the land-connected Matey ( _bg. Матей) island and the mouth of on the west to Srabcheto ( _bg. Сръбчето) hill on the east. During the 20th century, the west end of the city was significantly modified by moving the mouth of to the west, as well as by moving the bank itself with its fairway considerably to the north. Sarabair ( _bg. саръбаир) hill is to the south of the city and is 159 m high. The is built there on the remains of Leventtabia, a former Turkish fortification.

The city emerged as a Thracian settlement from the 3rd to , when pottery, fishing, agriculture, and hunting developed. Excavations reveal several layers, suggesting that the place was attacked by neighbouring tribes and suffered some natural disasters. Ancient sanctuaries were found nearby, where idols of a pregnant woman, a fertility goddess, were prevalent. The Thracian settlement later developed into a Roman military and naval centre during the reign of (69-70 CE) as part of the fortification system along the northern boundary of . Its name, "Sexaginta Prista", suggests a meaning of "a city of 60 ships" (from _la. sexaginta — "60" and _el. "pristis" — a special type of guard ship), based on the supposed 60 nearby s. The fortress was located on the main road between (modern ) and the and was destroyed in the sixth century by Avar and Slavic raids. Hungarian historian was the first to identify Sexaginta Prista with Rousse, but the Škorpil brothers demonstrated the link later through studying inscriptions, coins, graves, and objects of daily life. An inscription from the reign of proves that the city was rebuilt as a "praesidium" (a large fortification) after it was destroyed by the in 250 CE.

In the 13th and 14th centuries, during the time of the , a fortified settlement called "Rusi" (also "Golyamo Yorgovo"; _bg. Голямо Йоргово), first mentioned in 1380, emerged near the ruins of the Roman town. It later strengthened its position as an important trade centre with the lands on the opposite side of the Danube, until it was conquered by the in 1388. Scholars suggest that the city on the river bank derived its present name from the Cherven fortress ( _bg. Чѐрвен; " _bg. червѐн" meaning "red") through the root "rous", which is present in many and is a cognate of French "rouge" and "rusos".

During Ottoman rule, the invaders destroyed the town, reacting to a 1595 unsuccessful liberation attempt by a joint -Bulgarian army, led by . After its rebuilding in the following years, Rousse was dubbed "Rusçuk" (Turkish for "little Rousse") and had again expanded into a large fortress by the 18th century. It later grew into one of the most important Ottoman towns on the Danube and an administrative centre of , which extended from and to and .

The “Dunav” newspaper appeared – it was the first printed in Bulgaria and … in Bulgarian. Some Bulgarian schools were founded. The streets are renamed and numbered for the first time in Bulgarian lands. A post-office, hospital, home for the aged were founded. Three empires met here for trading: , , , and opened consulates in Ruschuk. Imperceptibly, the modern city arose from the shades of the settlement. In 1865 the Obraztsov Chiflik was founded on the place where the English Consul’s farm was and it was the first modern farm on the territory of the whole of that time.

Rousse developed into a centre of the and hosted the headquarters of the .

After it was liberated from the Ottoman Empire on , Rousse was one of the key cultural and economic centres of the country and the seat of Bulgarian shipping. Intensive building during the period changed the city's architectural appearance to a typical an one. That was also a time for a number of firsts for Bulgaria centred on Rousse, including the first private bank (Girdap), insurance company, chamber of commerce, filmshow, metal ship, and weather station.

“All facades on main streets of Russe shall have rich decorations with plastic stone”, postulate the Regulations for Constructions of Private Buildings of 1893, issued by the Municipality of Russe.

After knyaz Alexander Battenberg's 1886 abdication, and as a reaction to the regentship's course led by prime minister , a group of "Russophile" (pro-n) military officers revolted in Rousse. The riot was violently crushed, and 13 of the leaders were quickly sentenced to death and executed near the city, which caused a lot of public discontent. Decades later, in 1934, local citizens raised funds and built a monument at the place where the Russophile officers were executed. The monument was blown up in 1940, but rebuilt in 1966 at approximately the same spot.

Between and II, after was lost to Romania, the economic significance of the city decreased. So did the population, and Rousse was no longer the second-largest city in Bulgarian lands (after former n capital ), being quickly surpassed by and . Many big companies left, and all foreign consulates were closed, except for the Russian one, which has remained functional since.

The return of Southern Dobruja to Bulgaria in September 1940 fostered good conditions for restoration of the city's leading role. It became a provincial centre, and economic activity revived. The construction of the Rousse-Giurgiu bridge in 1954 and the fast industrialization gave a new push to development. Rousse emerged again as an important economic, transport, cultural, and educational hub. Engineering, chemical, and light industries expanded; a large harbor was built; and the city became a university centre. At the 1985 census, a population of more than 186,000 was reported.

Fall of Communism and democratic Bulgaria

In the early 1980s, Rousse entered a dark period of its history. The Verachim factory was built in , which polluted the air for more than 10 years, impacting the city's development. Population decreased, and 15,000 people moved out between 1985 and 1992. Fortunately, in 1989, the Romanian factory ceased the pollution, under pressure from environmental organizations on both Bulgarian and Romanian communist leadership. Organizations, such as Ekoglasnost, provoked nationwide demonstrations and strongly influenced the change to democracy.

During the 1990s, the global economic crisis in Bulgaria affected Rousse. Most big companies suffered a decline and unemployment increased, which led to renewed emigration waves. Since 2000, the city has been continually regaining its former leading status.

Today, Rousse is a large Bulgarian city, with a population over 170,000, and is one of the basic cultural and economic centres of northern Bulgaria. The country's accession to the is expected to bring local benefit through new investments and opportunities for international business.

Approximately 15 km southeast of Rousse is the village of Shtraklevo, near which is the former military Rousse Airport (currently closed). [http://www.bnr.bg/RadioBulgaria/Emission_Bulgarian/News/1809-2.htm] Plans exist to redevelop and reopen the airport by 2008–09 for internal, charter, and cargo flights. The runway is long enough for s (Jumbo Jets).

Noted for its rich culture, Rousse hosts a philharmonic orchestra and the (founded in 1949). The city is particularly famous for its Baroque and Rococo architecture.

The Jewish community in Rousse built and consecrated a in 1797. It was destroyed in the 1810 fire, but two other synagogues were later built in 1826 and 1852.

* The is an international for .
* (6 May) is Rousse's holiday. A local is organized for a week around this date.
* The Danubian Carnival is a held around , "Enyovden".
* The Sexaginta Prista Summer Stage is an urban festival. Events are hosted at the Roman castle every Friday from May through October.
* At the end of October are BG MediaMarket and the Bulgarian Europe Media Festival.